Kelly Coyler, the New Mexico state supervisor of officials, doesn’t believe New Mexico would have a cohesive group of hockey officials if not for Roger Newall.

“I don’t want to break my wrist beating myself on the back,” Newall said. “Having been around a lot of organizations, unsung heroes rarely are recognized and people who get recognized are usually at the forefront. For me, it’s a real privilege that someone decided to recognize me after all of these years.”

USA Hockey recently recognized Newall for a hockey career and impact that has spanned more than 50 years with the Chet Stewart Award.

The Chet Stewart Award was established in 2000 to recognize an individual who has dedicated many years to the USA Hockey Officiating Education Program and provided exceptional service to the hockey community as an official and volunteer.

The award is named in honor of the late Chet Stewart, who served as USA Hockey’s Referee-In-Chief for many years.

“I think it’s incredible to see [Newall] recognized,” Coyler said. “He’s a very valuable asset to USA Hockey. He puts a ton of additional hours into what he does and he has a huge passion for it.”

Soon after, Newall enlisted in the U.S. Air Force. He served in Vietnam and received the Distinguished Flying Cross and a Purple Heart among other awards during his service. A Distinguished Flying Cross is awarded to a person who distinguishes themselves by single acts of heroism or extraordinary achievement while participating in aerial flight. A Purple Heart is awarded to those wounded or killed while serving.

Newall worked as the Veterans Affairs Liaison in the mayor’s office for the City of Albuquerque for six years until his retirement in 2017. 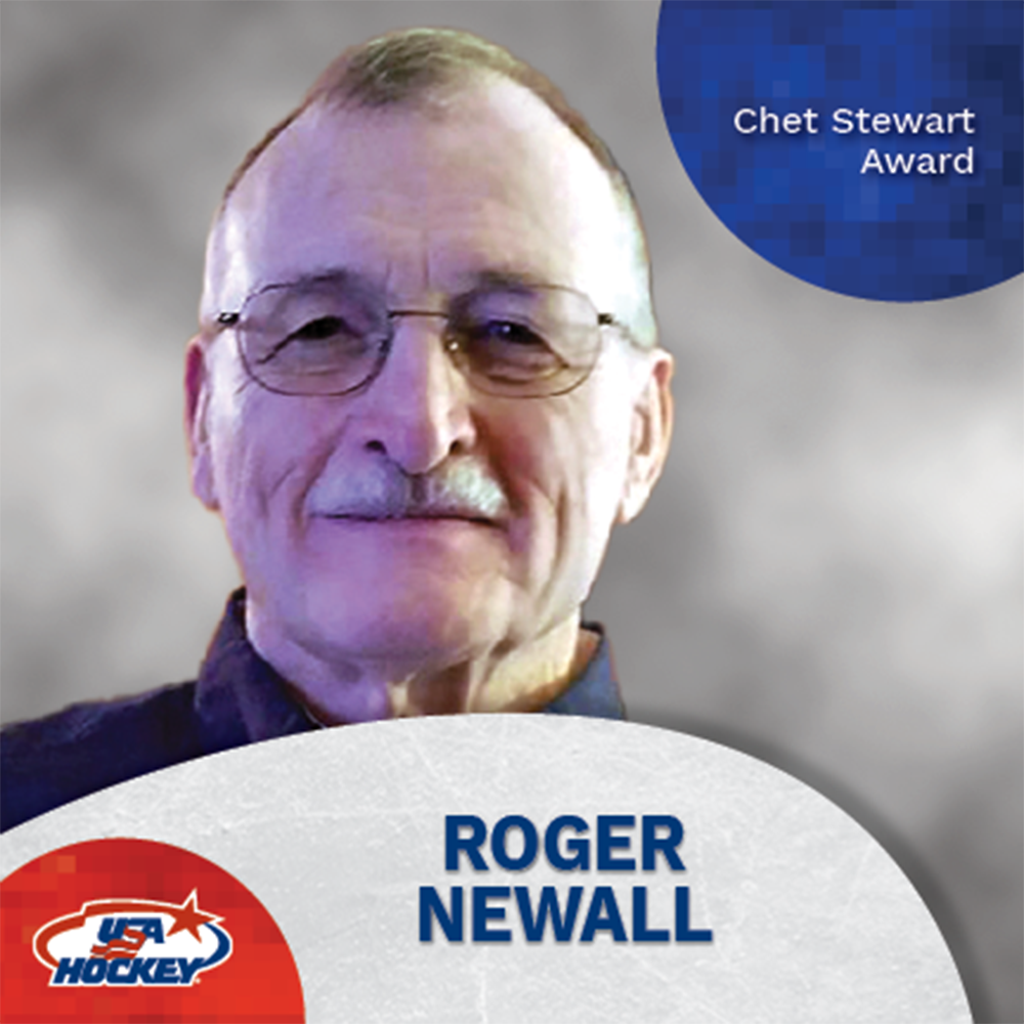 “My philosophy comes from a military and special operations background,” Newall said. “My feeling is to be able to give back to those who are coming along … to support a program and make it better. What have you done with what you have and how much better is it after you left? The things I’ve been able to get my hands into, I’ve made better.”

Newall has been a mainstay in the Rocky Mountain District hockey scene since the mid-1980s, when he began working as a USA Hockey official in New Mexico. Newall became a Level 4 certified official during his career and officiated virtually all levels of the game throughout the years. That includes youth hockey, junior, adult and a stint in the minor leagues with the now defunct Western Professional Hockey League.

“He’s an indispensable part of our group and does a lot of things that database managers don’t necessarily do now,” Reinhard said. “He provides us with a lot of detailed information, which enable us to do a pretty good job of managing our officials.”

Newall helped re-start the Land of Enchantment Amateur Hockey Association in 1986 and has been involved with the New Mexico Hockey Referee Confederation for nearly 30 years. He’s been a treasurer since 1996 and involved in scheduling since 2009.

“I’ve been able to give back in statistics and breaking down information so people know what they’ve been looking at,” Newall said. “What can I do from my position to get more information out of the people I’m working with? It’s like teaching. They have to grow on their own. You can present the information, but the people have to be interested, involved and learn it.”

Reinhard said that Newall was influential on Mark Lemelin, an NHL official who grew up in Albuquerque. Lemelin worked 59 NHL games and the 2018 Winter Olympic Games in PyeongChang, South Korea.

“He’s quite a unique guy who is always willing to help and still actively mentors and teaches,” Reinhard said. “Everything he’s done in his life is about serving others. Roger is a special guy and there isn’t anyone in this district who doesn’t have the utmost respect for him … not only what he’s done, but what kind of person he is. He’s very humble and very much a team player.”

Newall’s two sons Robbie and Michael were also officials. Like his father, Michael was a Level 4 official. Newall has been married to his wife Martha Ann for more than 50 years.

“This means a lot, but probably more for my two sons because they know what I’ve done,” Newall said. “For my wife, it’s been exciting because over 52 years of marriage, between playing and refereeing, she kind of let me do my thing.”

Newall earned his Level 5 coaching certification from USA Hockey in 1995. He served on the player development camp staff for the Rocky Mountain District from 1988 until 2007.

For Newall, the aspect he enjoys most is the opportunity to give back, whether it’s playing, managing, officiating, helping younger referees on the ice or providing statistics and information to assist the organization.

“Roger is someone who works hard and puts in way more hours than anyone will ever know,” Coyler said. “He understands what it takes for USA Hockey to be successful. I think it’s phenomenal that he’s getting recognized.”