Minnesota State University goaltender Dryden McKay never had an opportunity to meet Jim Johannson, but he certainly understands the impact and significance the long-time USA Hockey executive had on the sport.

That’s why McKay was honored when named the recipient of the 2022 Jim Johannson College Player of the Year award. Johannson, who enjoyed a life-long career in hockey, was one of the most accomplished and respected people in the sport.

“[Johannson] is a huge part of what USA Hockey is today,” McKay said. “He laid the foundation for the success that USA Hockey has had at the different levels. He really pushed USA Hockey and molded it into the powerhouse that it is today.”

The Jim Johannson College Player of the Year award was first established in 1994 and it recognizes accomplishments of the top American-born player in NCAA Division I men’s college hockey. In 2019, the award was renamed in honor of Johannson, who won a national championship while playing at the University of Wisconsin and spent two decades as an executive at USA Hockey.

“It’s a huge honor to win this award,” McKay said. “I’ve put in a lot of hard work and to get recognition from USA Hockey like this is very humbling. I’m really honored.”

McKay is the son of Ross McKay, a former professional goaltender. He’s named after Ken Dryden, a six-time Stanley Cup champion with the Montreal Canadiens.

“I think it’s a real tribute to [McKay], what he’s been able to accomplish at Minnesota State University, and the success they’ve had over the last number of years,” said Don Lucia, commissioner of the Central Collegiate Hockey Association. “He’s obviously been a big piece of it, especially this past season.” 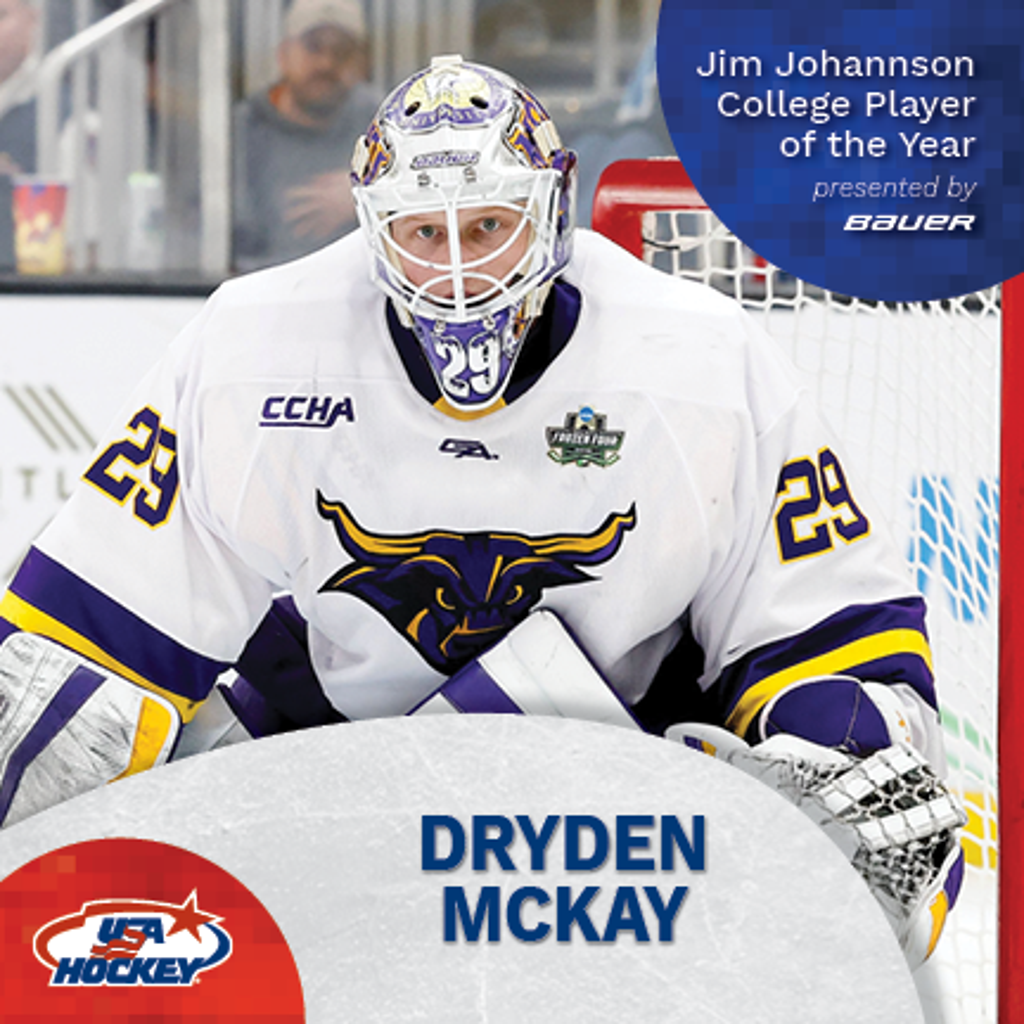 McKay, of Downers Grove, Illinois, led Minnesota State to the national championship game and he established a new single-season NCAA Division I men’s hockey record with 38 wins. McKay, who finished 38-5 overall, ranked second in the nation with 10 shutouts and a 1.31 goals-against average, while also turning in a .931 save percentage, good for seventh in the country.

“What impressed me the most was his ability to make a big save when he hasn’t seen a lot of action in a while,” Lucia said. “That’s not easy to do. It’s one of the things that really struck me. At that critical moment, if there was a breakdown, he was there to make the save.”

McKay was the 2021-2022 CCHA Player of the Year and a First Team All-America selection. McKay, a finalist for the Mike Richter Award, established a NCAA record with 34 career shutouts. That shattered the mark of 26 career shutouts, set by 2001 Hobey Baker Award winner Ryan Miller of Michigan State.

“When you look at Dryden, it’s not only this year, but it’s his whole body of work,” Lucia said. “He had a successful college hockey career. He was a difference-maker and if you talk to all of the coaches in the league, they felt the same way.”

Following the season, McKay signed with the Toronto Maple Leafs and he will join the organization in the fall.

“It’s the mecca of hockey,” McKay said. “It has all of the history. They showed genuine interest and showed that there’s an opportunity. It looks like a really good situation and they showed that they see a future for me. Now, it’s back to what I’ve done my whole career and that’s earning every opportunity I get. There are no handouts, so I’m excited to get up there, meet everyone and get started.”