Hilary Knight has long since established a reputation as one of the top players in U.S. hockey history.

In 2022, the four-time Olympian further cemented herself as one of the best in the world and she was once again rewarded for her efforts.

Knight was named the 2022 Bob Allen Women’s Hockey Player of the Year, an award that salutes the accomplishments of an outstanding American-born women’s hockey player.

“Obviously, it’s an incredible award and it means a lot when you can be recognized,” Knight said. “The award is there to recognize great players, but I can’t emphasize enough that I play with amazing teammates. It’s an honor, but I can’t thank the players I play with enough for setting me up for success.”

The award is named in honor of the late Bob Allen, who was an ardent supporter of women’s hockey throughout his career.

“As a veteran player on our team, for her to shine like that in this year was just incredible,” said Katie Million, director of women’s national team programs for USA Hockey. “Obviously, it shows what a competitor and what an outstanding hockey player she is.”

In February, at her fourth Olympic Winter Games, Knight played her 22nd Olympic women’s hockey game, most ever by a U.S.-born women’s player. Knight, who served as an alternate captain, led Team USA with six goals and 10 points as the U.S. won a silver medal in Beijing. 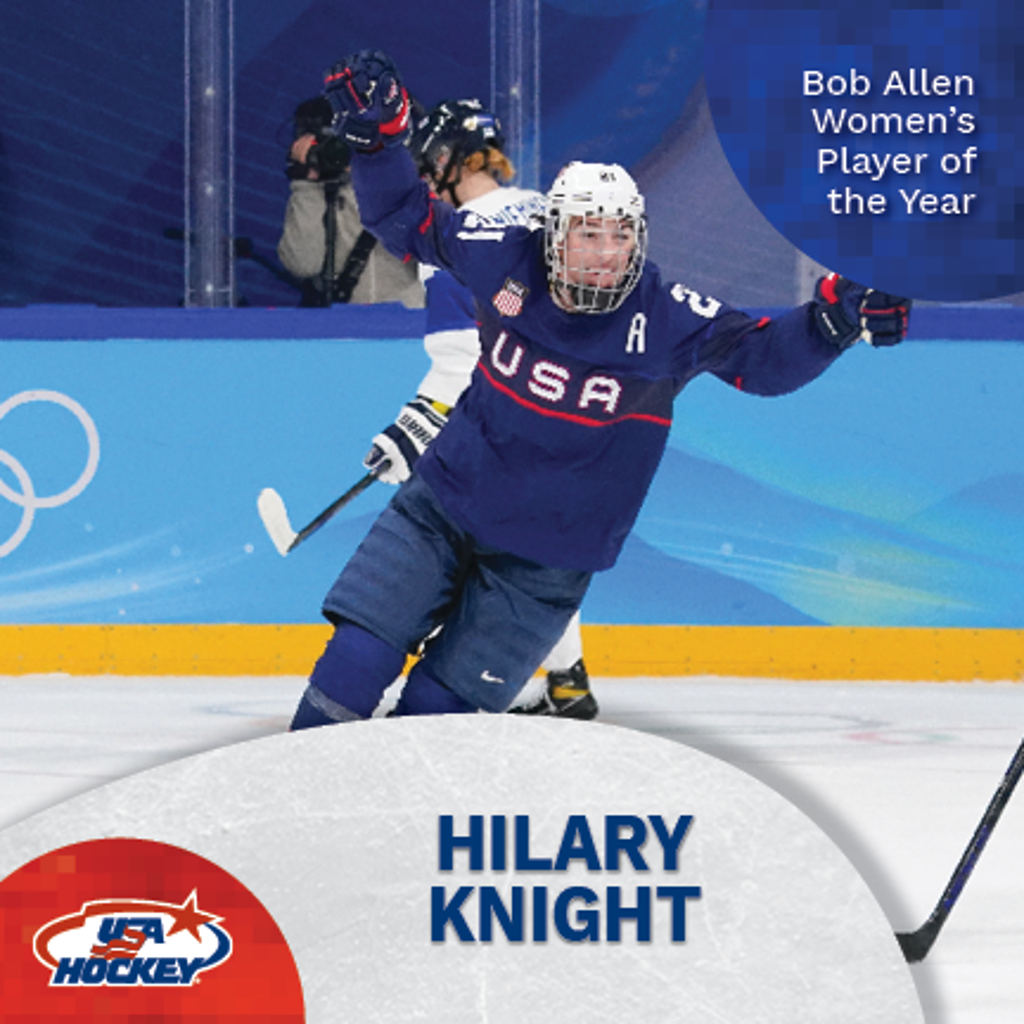 “She’s one of, if not the, premier player in North America, and certainly the United States,” said Joel Johnson, head coach of the 2022 U.S. Olympic Team. “I think that, in and of itself, you’re talking about a record-breaking career. One of the things people don’t talk about is the longevity of her career and the fact that she continues to get better with every event she plays in. The accomplishments and the litany of things you can write down statistically speak for themselves.”

Knight’s goals were significant ones, too, among them a pair of game-winners and an important shorthanded goal during the gold-medal game against Canada. Her defensive efforts were just as impressive, as Knight posted a plus-six through seven games.

In the lead-up to the Olympic Winter Games, Knight scored four goals and five points in six games during the My Why Tour, presented by Toyota against Canada. Knight now has 12 goals and 27 career points in Olympic competition. That’s first among active U.S. players and second all-time in points behind Jenny Potter, third in goals behind Natalie Darwitz and Katie King and second in assists behind Potter.

“She’s grabbed the spotlight and kept it for a decade,” Johnson said. “When I look at Hilary, she’s had a great career and has been one of if not the best performing players for Team USA for a long time. She splashed onto the scene early at Wisconsin and she keeps getting better. The reason she keeps getting better is because she’s a complete player and she’s still providing one of the best offensive threats in the game.”

Million was impressed to see Knight’s continued climb up the record books in Beijing.

“Hilary Knight just keeps racking up awards,” Million said. “She’s just an outstanding player. The longevity, loyalty and commitment is incredible and I couldn’t be happier for her.”

Knight, of Sun Valley, Idaho, has been a mainstay on the U.S. Women’s National Team since 2006. She helped Wisconsin to a pair of national championships and also won titles in the professional space as well.

Knight credited teammates for one of the most decorated careers in U.S. women’s hockey history.

“I think any hockey player knows that you don’t sign up for the individual accolades,” Knight said. “It’s one of those things where you play with great people and sometimes you get rewarded individually for it. It’s a testament to the program and the type of women we have in that room. That’s what keeps drawing me back and wanting to represent our country.”