It paid off in the biggest way possible for Tracy, who led Sioux City to the 2022 Clark Cup championship and was also named the 2022 Dave Peterson Goaltender of the Year.

“During the summer and training camp, I made sure I was on top of my stamina and mobility so I could play as many games as possible,” Tracy said. “Ultimately, that’s the most important part … to always be ready no matter when my number is called. I made sure my mind and body were prepared for a long season.”

The Dave Peterson Goaltender of the Year is selected from a pool of American-born goaltenders who play at the junior level each year. The award is named in honor of the late Dave Peterson, a passionate leader of goaltender development, who twice coached the U.S. Men’s Olympic Team.

Prior winners include Anaheim Ducks goaltender John Gibson, in addition to Cory Schneider, who started his career in Vancouver and played seven seasons with New Jersey. Award winners are voted upon prior to the completion of junior hockey playoffs.

“Alex Tracy is a major competitor,” said Sioux City head coach Luke Strand. “He has a desire to be the best and he’s an unreal human being. He’s so competitive about what he wants to be. I believe his No. 1 asset as a teammate is wanting to compete for all of his teammates.”

Tracy, a native of Chicago, only appeared in 18 games during the 2020-2021 season with Sioux City. But last season, Tracy appeared in 44 regular-season games and led the Musketeers through the United States Hockey League’s Clark Cup playoffs.

“This is such an honor, and for the season to end the way it did was such a great experience with my teammates, friends, coaches and family,” Tracy said. “For the [award] announcement to be made at our championship rally was such an unbelievably humbling moment and super special to me. My family and I put countless hours into the sport to put me in the position that I’m in today. For all of that work to pay off is awesome.” 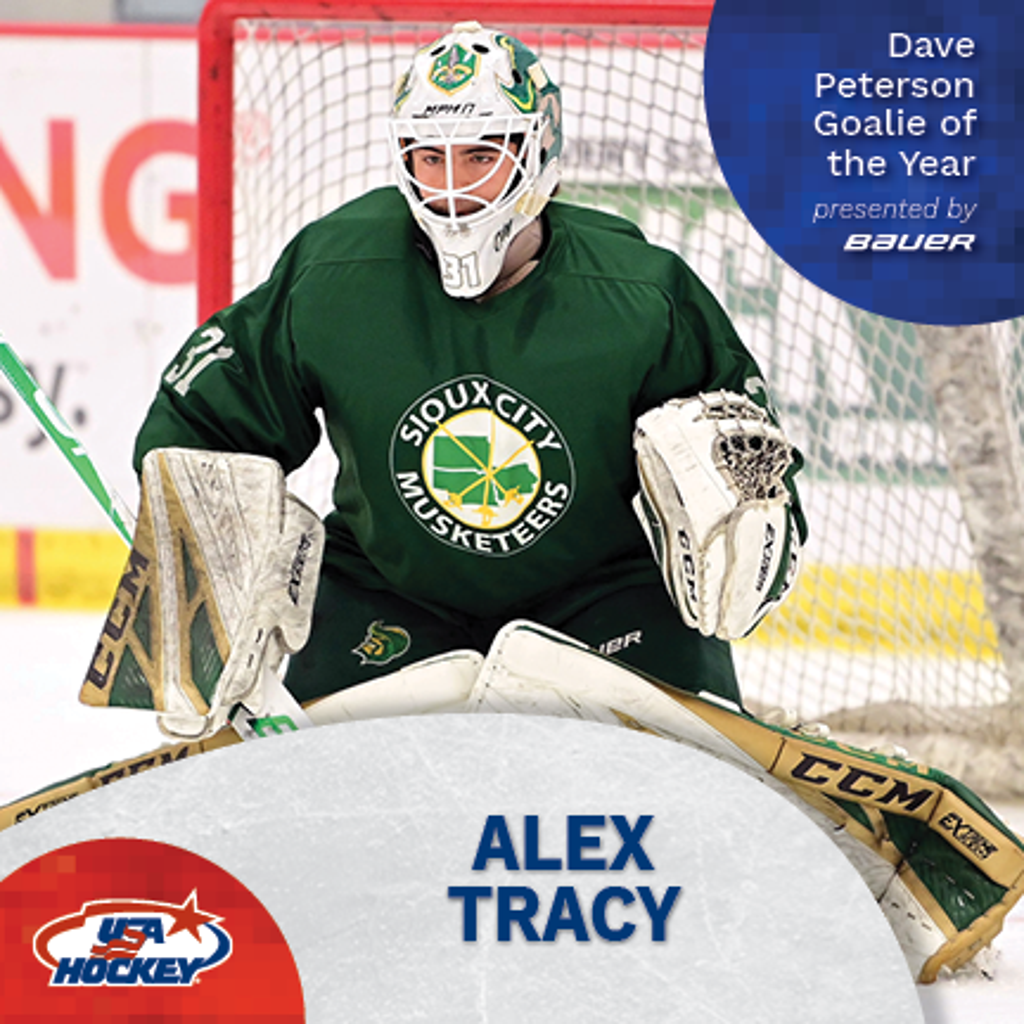 “My individual accolades were a testament to how good of a team we had,” Tracy said. “They put pucks in the net, they blocked shots and played the majority of games in the offensive zone. They definitely made my job easier.”

Tracy lost back-to-back starts in regulation just once all season, on Dec. 31 and Jan. 2. Following that January start, Tracy went on to win 18 of the next 22 games with one shutout. He led the USHL with 44 regular-season games played and finished third with 2,427 minutes played. Tracy also played in two shootouts and won them both.

“There were definitely some ups and downs,” Tracy said. “I had a good start to the year, but like everyone who plays hockey knows, you’re not always going to have your best games in the middle of the year. I worked on my mental game and I think it paid off because as soon as I got back on track I never looked back and neither did our team as we accomplished our ultimate goal.”

Tracy previously played for the Johnstown Tomahawks in the North American Hockey League (NAHL) during the 2019-2020 season. Tracy, who played youth hockey with the Chicago Fury, won both NAHL East Goaltender of the Year and Rookie of the Year honors.

Tracy admitted to a rough mid-season stretch with Sioux City, but he eventually figured out his issues and that poise carried him through to the end of the year.

“Most of it was mental,” Tracy said. “As soon as I started stringing together wins, I was able to ride that confidence for the rest of the season. I was telling people close to me that I was more nervous for early regular-season games than my first career USHL playoff game. It was a testament to how well I was able to play in the playoffs.”

Tracy went 8-2 in the USHL playoffs. He had a .937 save percentage and a 1.59 goals-against average with three shutouts.

“Every single person was dialed in and focused on our one goal,” Tracy said. “It was the best experience of my life and I’m super excited we were able to get it done.”

“I’m super excited to go to such a prestigious school,” Tracy said. “It was definitely exciting from the moment I committed. Now that we were able to bring home a Clark Cup championship, I’m looking towards the future and I couldn’t be more excited to get started with Minnesota State.”