Forward racked up 81 points for Fighting Saints this season

Dubuque forward Connor Kurth wouldn’t quite say that he was star struck after winning the 2022 Dave Tyler Junior Player of the Year Award as the most outstanding American-born player in junior hockey.

But the Fighting Saints standout was happy to be added to a list that includes several current National Hockey League stars.

“I was speechless to see all of the amazing names on the list,” Kurth said. “I was so excited. It was a huge honor for my family and I.”

The Dave Tyler Junior Player of the Year Award is chosen by a panel of junior coaches and administrators. Criteria for the award also includes having played for a U.S.-based junior team.

Tyler served on the USA Hockey board of directors for 32 years and played an instrumental role in the development and growth of junior hockey in the United States.

“It’s super cool to see those guys and a lot of them playing in the NHL,” Kurth said. “It’s surreal and a huge accomplishment. I’m just really happy and honored.”

Kurth, a native of Elk River, Minnesota, finished fifth in United States Hockey League (USHL) regular season scoring with 81 points during the 2021-2022 season. He had points in 44 of 62 games played and scored seven goals and 21 points with the league’s sixth-best power-play unit.

Kurth, who posted 25 multi-point efforts, also tied for fifth in the league with 35 goals, ended fifth with 217 shots, eighth with 46 assists and had a plus-37, the second-best mark in the league. 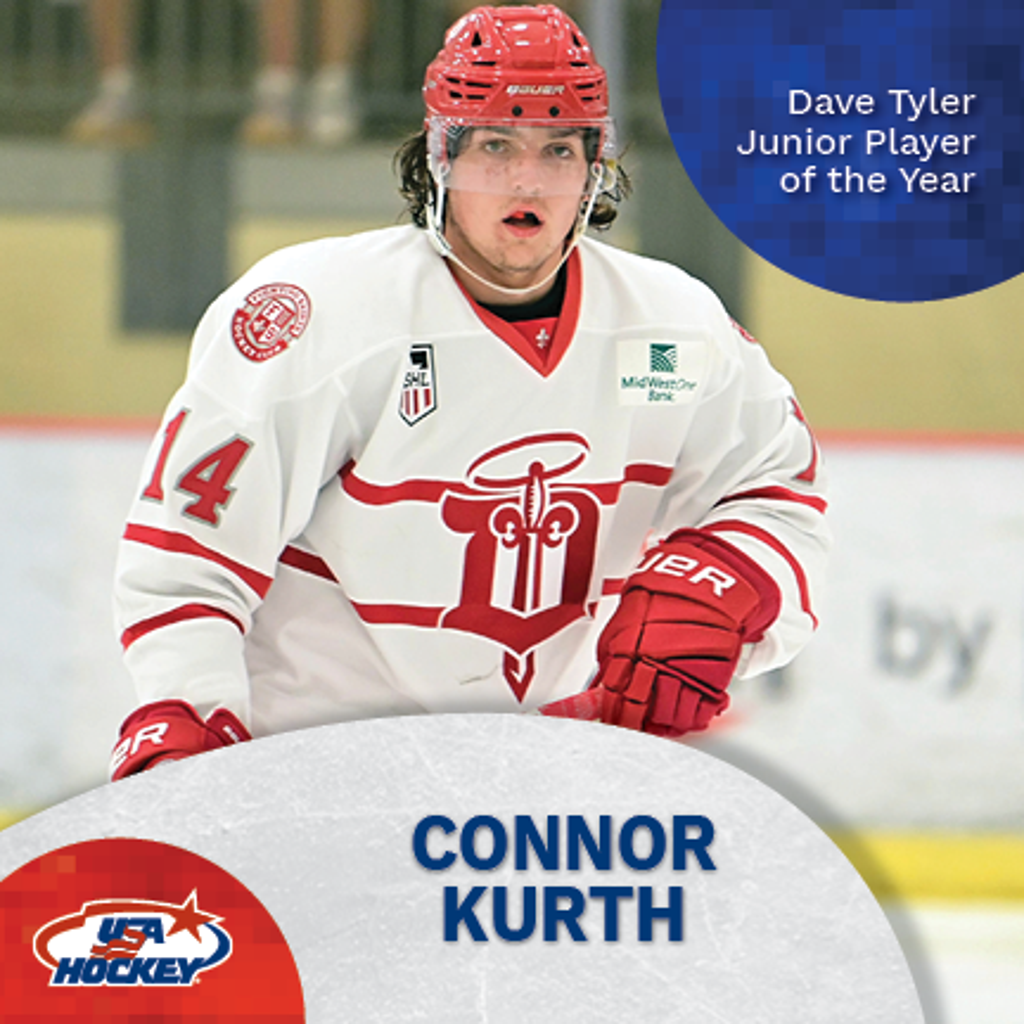 “It’s a tremendous honor for him,” Dubuque head coach Greg Brown said. “He had a great year and I’m very happy for him. He put a lot of effort into this season and it’s very nice to be recognized like this.”

Kurth scored 50 goals and 122 points in 114 career games with Dubuque. The biggest jump in improvement came this past season for Kurth. He nearly doubled his production during the 2021-2022 season after scoring 41 points in 52 games the previous year and led Dubuque to a 40-16-3-3 regular-season record, good for second in the conference.

“It was actually a big point of emphasis,” Kurth said. “My focus was on getting better and doing the little things over the summer, so it was really cool to see that jump. I was really proud of myself for the work I put in during the summer and the season prior.”

Kurth also received league-wide recognition when he played in the BioSteel All-American Game for the second straight season. In the most recent contest, Kurth played with teammates Stephen Halliday and Kenny Connors. Kurth finished with four shots on goal and had the primary assist on Halliday’s first goal of the game, which was also helped by Connors.

“It was such a fun experience, getting to play with some of the guys around the league, and it’s always cool when you get to play on TV,” Kurth said. “I felt a lot more comfortable. I knew how it worked and I was able to be more open and talk with the guys. It was just more confidence and being more comfortable.”

Kurth finished fourth in overall scoring in team history. He tied for fourth in goals and ended fourth in assists, while also posting the seventh-highest points-per-game average. His 81 points were second-most in single-season history.

“He has a great work ethic, a real understanding of the game and a great ability to produce points,” Brown said. “He has a great knack around the net. He’s great in the locker room with his teammates and he’s a great person off the ice. You love to see guys like him succeed and you root for those guys. It’s great to see him get rewarded.”

Prior to joining Dubuque, Kurth played for Gentry Academy in St. Paul, Minnesota. He won’t have to go far from home for his upcoming college career, as Kurth is committed to play at the University of Minnesota next season.

“We have a really good group there, I love the coaches and I’m really excited to get to work,” Kurth said. “Coming off a good season [at Dubuque] gives me a lot of confidence going in. It’s close to home, and I’m just really excited about the opportunity.”