There are a lot of boys and men in the inner city that know Mr. Noel.

“There are guys that are full grown with a beard and a deep voice, and they expect me to recognize them,” Acton said. “I knew them when they were little kids. It’s neat they remember me and don’t forget.

It’s hard for the 78-year-old Acton to remember everyone he’s worked with the last 20 years.

Acton has impacted thousands of boys’ lives as the founder of the Tender Bridge Foundation. Its mission is to get kids off the street and involved in sports, especially ice hockey.

“If they’re homeless, if they get hooked on drugs, they do not have a good outcome because they are almost unemployable,” Acton said. “It takes a lot of work to get them past issues. The thing that works nice is they love hockey, and it’s the hook that keeps them involved. But the other neat thing about hockey is you don’t have to be 6-foot-6 like you would for basketball or 220 pounds like you would for football.”

Acton and his fellow volunteers provide all levels of assistance ranging from equipment and transportation to meals. The foundation wants to help the kids succeed and not fall into drugs or gangs.

For his dedication to making a difference in his community for the last two decades, Acton was named one of three finalists for the 2022 Willie O’Ree Community Hero Award.

“It’s really rewarding,” Acton said. “What we’ve done with our program has been so successful helping inner city kids, and I would really, really like to have other people be able to duplicate it. Not for us to expand, but for other people to duplicate it. It really requires a lot of individual attention as opposed to having 500 kids and expanding to 1,000 kids next year — for us, that doesn’t accomplish anything.”

Acton, who retired from engineering management in the late 1990s, started his organization kind of by accident. In 2002, he was helping a friend watch some kids and bringing them to the hockey rink, and he had the idea of helping at-risk youth that need an outlet to escape the inner city and its temptations. The following year, Acton started the Tender Bridge Foundation.

The Baltimore Banners and Junior Banners hockey teams are run through the foundation. The teams allow kids and mentor adults to play the game in a fun atmosphere. It’s a safe space for the at-risk youth to not only increase their chances of survival, but also become a positive influence in the Baltimore community, noted Acton.

In season, Banners players skate twice a week on the ice, but their home rink closes in March. During the off months, participants compete in other activities such as street hockey for the younger kids and roller hockey for the older kids. 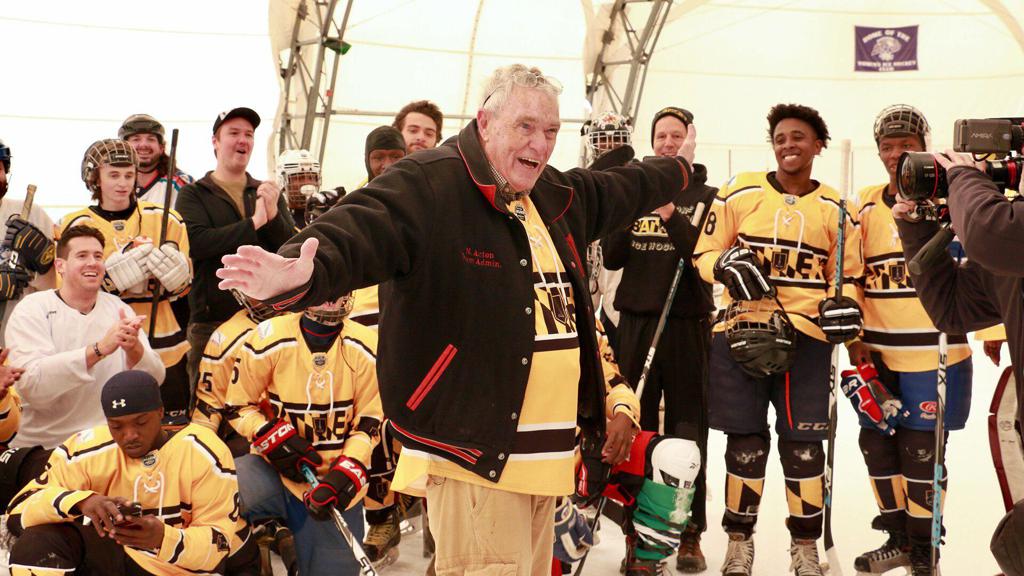 The participants also partake in other outdoor activities such as mountain biking.

“It’s really interesting because these guys rarely get out of the city and for them to get out on a mountain biking trail is really cool for them,” Acton said.

Acton feels like his program is highly successful and different from others because kids have an outlet year-round.

“The problem is, these kids, they’ll connect with a coach and then the football season’s over, they connect with a teacher, and then the next year they have a different teacher,” Acton said. “Many don’t have much support at home, so having our coach mentors with them year-round and year after year is really part of the thing that makes it family for the guys. That sense of family is what’s really, really important for our guys, because they don’t have it at home and they’re looking for it and in the inner city you find it hanging with a gang.”

The foundation currently works closely with 45-50 kids at a time. Acton tries to keep the numbers manageable enough so that the mentor-to-kid ratio is two kids for every coach.

The program attracts kids ages 6 and up. It doesn’t have a cap on age because there’s a fair number of adults with autism spectrum disorder and other health disorders.

“What we do is we treat it as, ‘You guys are Banners for life.’ They like to stay involved,” Acton said. “What we are doing now is having some of our veteran Banner guys do an adult league, so they’ll still be as a team and some of the coaches are going to be on the team.”

Acton really finds it rewarding when former Banners players come back and volunteer for the program. They are giving back to something that helped them get and stay on their feet.

“They still feel attached, which I think is one of the really cool parts,” Acton said.