The team played every game at Nationals with Duval’s jersey hanging behind the bench.

A number 27 jersey with the name “Duval” stitched across the back hung behind the North Shore Vipers’ bench all season.

It was a constant reminder of what Sarah Duval meant to the Vipers and for the players to cherish every moment because life is short.

The 11-year-old lost her battle with leukemia on Feb. 8, 2021, nine months after her initial diagnosis. Duval touched countless lives in the tight-knit hockey community of Andover, Massachusetts.

“That was really sad,” said Michele Caiazzo, a player on the Vipers’ 14U girls’ team and family friend of Duval’s. “We didn’t expect it. It wasn’t supposed to be that way. She was almost at the end of her treatment.”

Caiazzo said Duval, who would have played this past season with the Vipers’ 12U team, was such a nice girl.

“Sarah was so motivated and she was the kindest person,” Caiazzo said. “She always worked hard at everything and she loved hockey.”

Vipers 14U girls coach Keri Allan unfortunately never had an opportunity to coach Duval. However, she heard plenty of stories about how bubbly, fun and full of life the young player was up until her untimely death.

The Sarah Duval Memorial Fund was set up to keep her name alive. A scholarship is awarded annually to a senior at Andover High School who aspires to become an early childhood educator — a profession Duval wanted to pursue when she grew up — or would like to work in the health and human services field.

Every year there are also Sarah Strong Memorial Hockey Games to raise money for her memorial fund, and on April 3, there is a birthday walk for the community to celebrate Duval’s life.

“Our program’s pretty invested in the Duval family in keeping her memory and her spirit alive,” Allan said.

Since Duval was a hockey player for the Vipers, the 14U girls team dedicated its season to her. With their angel flying above them, the team went on a remarkable run to win the 2A title in the Chipotle-USA Hockey Girls Tier II 14U National Championships in West Chester, Pennsylvania. 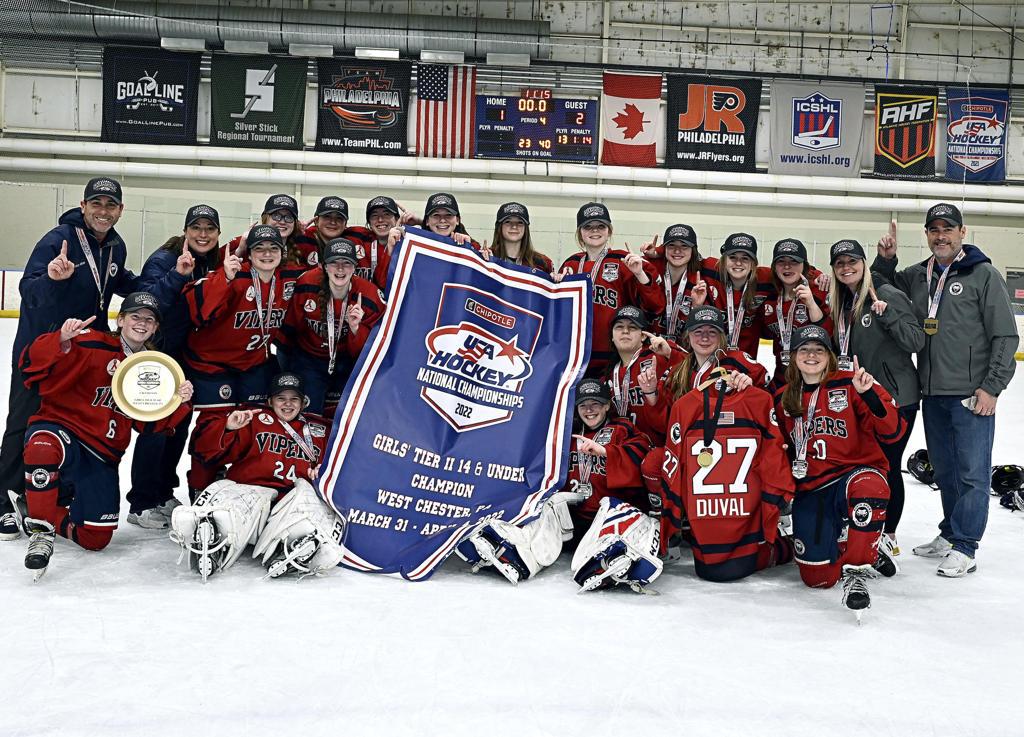 Members of the North Shore Vipers pose after the championship with a Sarah Duval jersey.

Prior to leaving the locker room for their first game at Nationals, Allan had a message for her girls.

“I didn’t really bring it to the forefront until Nationals, saying, ‘Let’s do it for her, she can’t do this. This would have been one of her dreams to be here,’” Allan said. “It was a motivational factor and a tribute to the family that we were skating for her.”

The Vipers had Duval’s jersey hanging behind them for the games in the national tournament.

“Getting to Nationals, especially, that’s something she’ll never get to do and just to be able to win games for her, even get to Nationals, we dedicated it toward Sarah,” Caiazzo said.

North Shore lost its first two games and had to run the table the last four games to remarkably capture the championship. Allan believes a little divine intervention played a factor with Duval watching over them to help the Vipers take home the title.

“We were on the brink of elimination going into the third round-robin game. We hadn’t found our game again,” Allan said. “My entire team had never been to a Nationals before, so you’re behind the eight ball right there because of lack of experience, and 90% of my team are first-year 14s. Again, you’re behind the eight ball because of age. We ended up finding our game, thankfully, in that third round-robin game to keep our hopes alive.

On April 3, Duval’s birthday, the 14U team was victorious in the quarterfinals and semifinals in West Chester. Nearly 350 miles away in Andover, community members were walking in honor of Duval.

“I think on her birthday is when my team in Nationals started to really pick up the pace and go a lot, and I feel like Sarah had something to do with it,” Caiazzo said.

The Vipers rode the wave and won the national title game the next day, beating the Arizona Kachinas 2-1 in a shootout.

“Happy that we could get the job done and keep her memory alive and hopefully there will be more to come,” Allan said. “Just proud of the kids, proud to help represent the family and keep her spirits going. She would have wanted that.”

After an on-ice celebration, the players were awarded their championship medals around their necks.

“Right when we won, the first thing I thought of was Sarah,” Caiazzo said.

Emotions ran high for everyone involved with the Vipers’ program. They’d accomplished their ultimate goal of winning a national title and did it with Duval on the forefront of their minds.

The customary photo for any team that wins a national championship is special. With all the players and coaches gathered together on the ice, Duval got memorialized one more time.

“You see in the picture, Michele is holding Sarah’s shirt and you could tell that there were definitely tears going on when we pulled that jersey out,” Allan said.