Another Year Older, Another Adult National Title for Minnesota Oldtimers

The Minnesota Oldtimers adult hockey team has a tradition of excellence on the ice.

When it comes to the annual USA Hockey/Labatt Blue Men’s Adult National Championships, it’s important for the highly competitive group to bring home a title.

The team wrapped up its second consecutive national championship, winning the 75+ Open division with solid defense and a high-octane offense. The tournament was held April 7-10 at AdventHealth Center Ice in Wesley Chapel, Florida.

“There’s a lot of pride involved, and the pride comes from the fact that we skate three days a week,” Oldtimers captain Jerry Melnychuk said. “We’re not just coming here to have a vacation. It’s kind of like the Stanley Cup playoffs, so to speak. We play all year, then we go to Tampa and hopefully we find some good competition.”

Team member Bill Rossini had to miss last year’s Nationals because he was having hip replacement surgery. To get back on the ice with his friends was really rewarding.

“We’ve got a great bunch of guys, we’re all aging,” Rossini said. “It’s still fun to go to the tournaments and compete. We’re definitely a group of hockey guys that have been together a long time and we do like to compete. We get into a lot of tournaments.”

The Oldtimers have been attending Nationals for over a decade and have won titles in the 70-and-over division in 2014, ’15, ’17 and ’21. This year, a four-team 75+ Open division was added, and the Oldtimers were presented with a new challenge.

After a 6-2 victory in the tournament opener, the Oldtimers fell 4-3 to the Florida Leafs in a shootout.

“We actually won that game mentally,” Melnychuk said. “We controlled the play; we took 50 shots at their goalie. That game could have easily been 10-0. They beat us by [one goal], very unusual. We just said, ‘Hey, let’s put that behind us, go to the next game.’”

At that point, the Oldtimers’ defense tightened up, and that made all the difference. The team beat Illinois Ice 75, 1-0, and then in the title game, it beat the Ironworkers 75 for the second time in the tournament, 2-0. 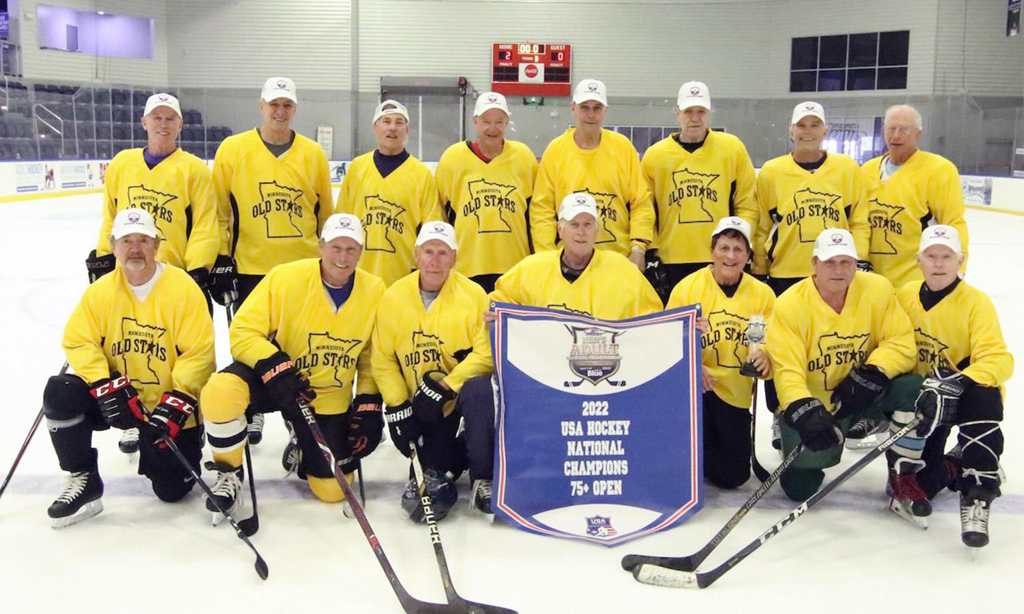 “Before the tournament started, I was thinking, well, how good can these teams be at 75 years old? And it turns out they’re good,” Rossini said. “They’re very evenly matched teams, and even though we beat the Ironworkers the first game 6-2, all the other games, one was an overtime shootout, the other game was 1-0 and the last game until we scored in an empty net with 30-40 seconds left, it was 1-0. There’s a lot of competition, and the guys really had to work hard to score on all the teams.”

The Oldtimers program is comprised of about 60 players ranging in age from 63-85. It’s a dedicated group of guys from the Twin Cities and surrounding suburbs that skate three days per week — Tuesdays, Thursdays and Sundays — during the season.

Not just anyone can play for the Oldtimers; the team has high standards on who it allows into its hockey fraternity.

“I think the key to all of this is, and I was part of it, we’re selective on who can play with us,” said Melnychuk, who captained the University of Minnesota Golden Gophers in 1959-60. “In other words, many of these leagues around the Twin Cities, there’s all kinds of them and they let a lot of guys in who are 30, 40, 50, and they dominate and the older guys never get to touch the puck. So the first rule we made was to join our group, you have to be at least 63, 64. … We control the age group.

“The second thing that we control is we don’t want to deal with amateurs. In other words, just because a guy wants to play, that’s not qualification. In order to join our group, you will have to have at least played high school hockey, but that’s just the minimum. The majority of our guys are all college guys or pro, so on our team, that’s the deal. Most of us have played college.”

The Oldtimers that played in this year’s Nationals range in age from 74 (you have to turn 75 this calendar year) to 85.

Melnychuk, who will turn 84 years old in June, is the second oldest player on the team.

The Oldtimers players are already looking ahead to next year to return to Nationals and defend their title.

“We want to keep it going,” Melnychuk said.

“We’ll keep at it until our legs don’t work anymore or we have other ailments,” said Rossini, who is 75 years old. “It’s not guaranteed. Every day’s a blessing at our age and we’ve lost a couple teammates just in the last year here due to different ailments, and it’s an eye-opener. When that happens, you kind of look in the mirror sometimes and say, how long can I still do this? When we do get on the ice, afterward we have a beer and raise a glass to the guys that are gone now and say, ‘Hey, we’re really lucky to still be doing this.’”