When Pond Hockey Becomes More Than A Game

The Gappers used this year's tournament to honor their friend Brian Zinkel.

He made sure registration was all set and plans were made for his Chicago-area teammates.

Last week the Gappers were preparing to head up north for their eighth trip to Eagle River. As teammate Jon Thorsen was packing his stuff on Thursday morning, he stopped in his tracks.

“I broke down, because Brian was always the one coming up to pick me up,” Thorsen said. “We would take multiple cars.”

There was going to be a major void for the Gappers in the tournament as Zinkel died in December. His longtime friends played in the event in his honor, wearing identical Zinkel jerseys.

“It’s really sad to be here without him,” teammate Jacob Hines said. “It’s sad, but it’s like this is what we would be doing with him, so it feels right.” 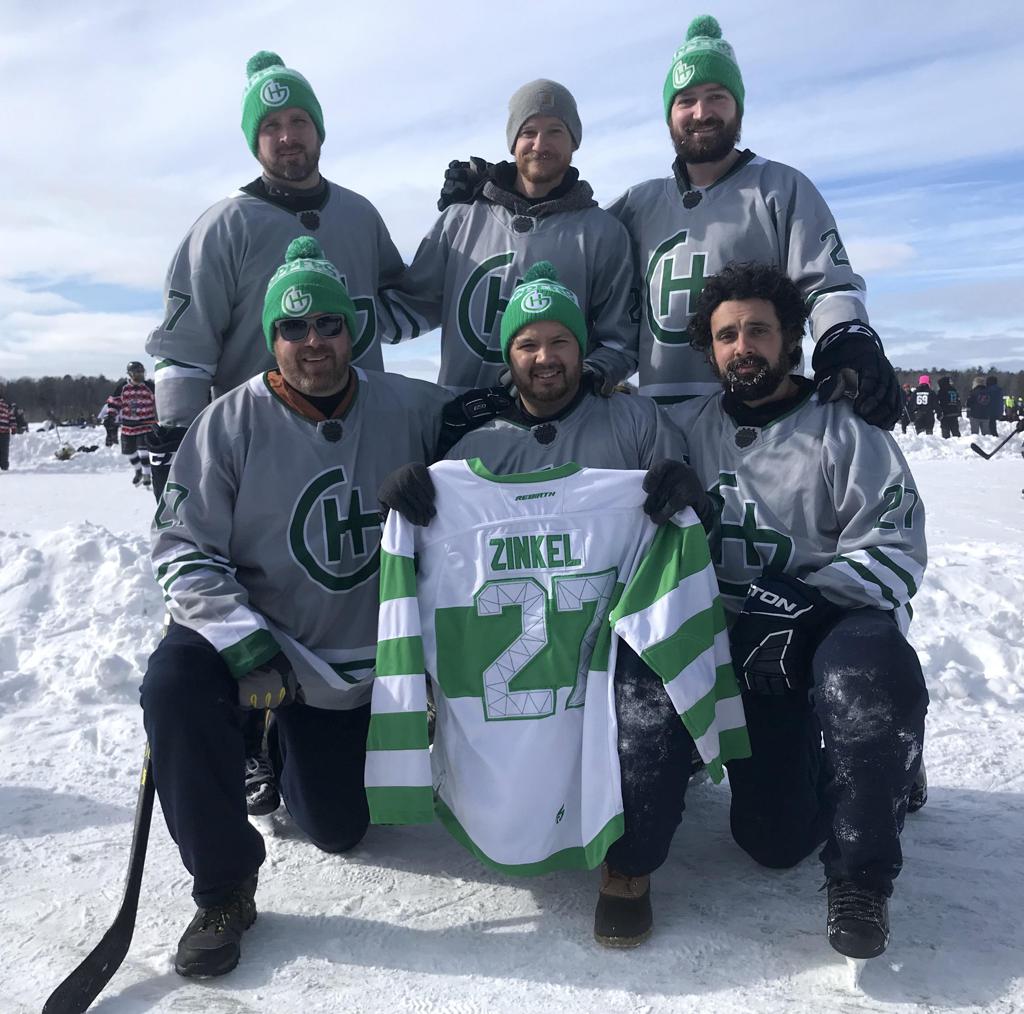 With hockey sticks in hand, the guys got choked up talking about their friend.

“It’s obviously great being out here, but it’s really hard,” Thorsen said. “This weekend is obviously very special to all of us. I’m really happy that all of us are getting together and doing this, but not a moment goes by I’m not thinking that he’s not here and our team isn’t whole. When we’re hanging out at our cabin, I always look around the room and he’s not there.”

Hockey was a fun pastime for Zinkel, but it wasn’t his life. He had so many interests, noted Hines.

“Brian’s life was full of adventure. He did all sorts of things,” Hines said. “He loved hockey, but he also loved the Packers and he loved hiking and being outside and camping, going to concerts. He loved lots of things.”

Zinkel, a Wauconda, Illinois, native, was diagnosed with a brain tumor in the summer of 2017. He was able to play in the pond hockey tournament three times after that.

“He shouldn’t have made it nearly as long as he did,” Thorsen said. “He fought.”

Zinkel and his wife, Bree, welcomed their first child, Elijah, into the world in October 2021. Two months later, Zinkel’s condition had worsened. He passed away on Christmas Eve, surrounded by family and friends.

“It’s so hard to put into words how tragic this whole thing is, because he was such an amazing person,” Thorsen said. “He brought so many people together all over the place to do all sorts of different, fun things. We are always talking now about how did he have time to be so important in so many peoples’ lives.”

The Gappers players never talked about skipping this year’s pond hockey tournament, because it was important to come and pay tribute to Zinkel.

“We’re always going to come up here and play for him, and it’s something that we’re going to do for as long as we can,” Thorsen said. “Obviously, we’ll never be able to replace him, but it’s going to be that much more important to come here every year.”

The Gappers played in the Intermediate 30+ Division and got off to a fast start with two wins on Friday. However, on Saturday, the team dropped both its games and were eliminated from the tournament.

It’s not really important for the Gappers to win; the guys just want to work hard on the ice, give it their all and have fun.

“We would love to win this thing someday, especially now,” Thorsen said. “I’m sure we all felt we really wanted to win it when he was with us. We still certainly want to do that, but the important thing is just coming up here and being together and having fun and honoring him the best way we can.”

Wearing matching jerseys with Zinkel’s No. 27 on it, the Gappers recorded a resounding 20-3 victory in their opening game.

The Gappers were cruising in their second game when something struck them.

The guys believe a little divine intervention played a role in the final score.

“I’m sure Brian’s paying attention,” Hines said. “A little disappointed in that last performance by us. He’d be giving us a hard time. We know he’s here with us.” 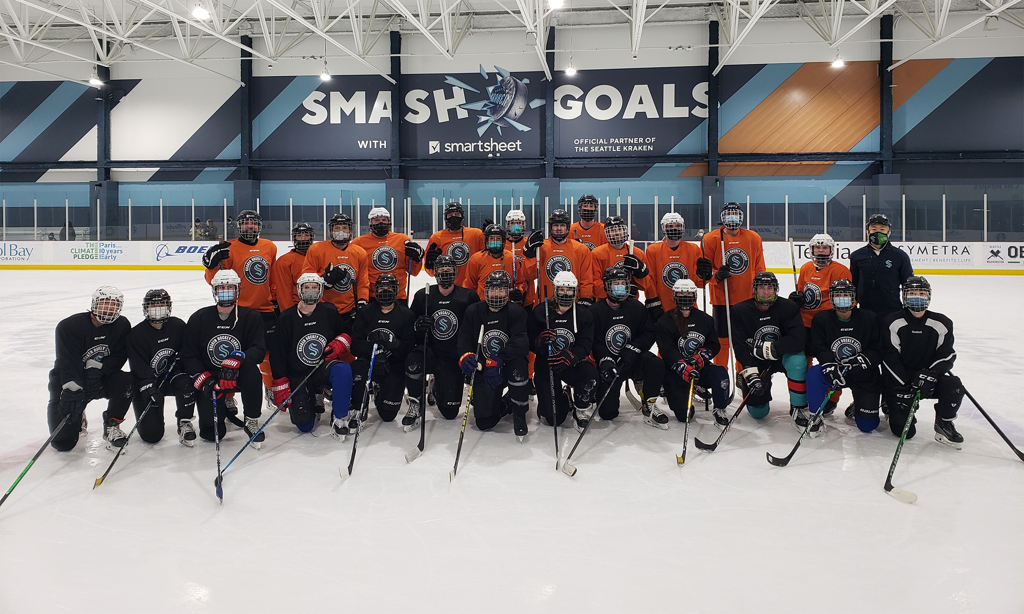 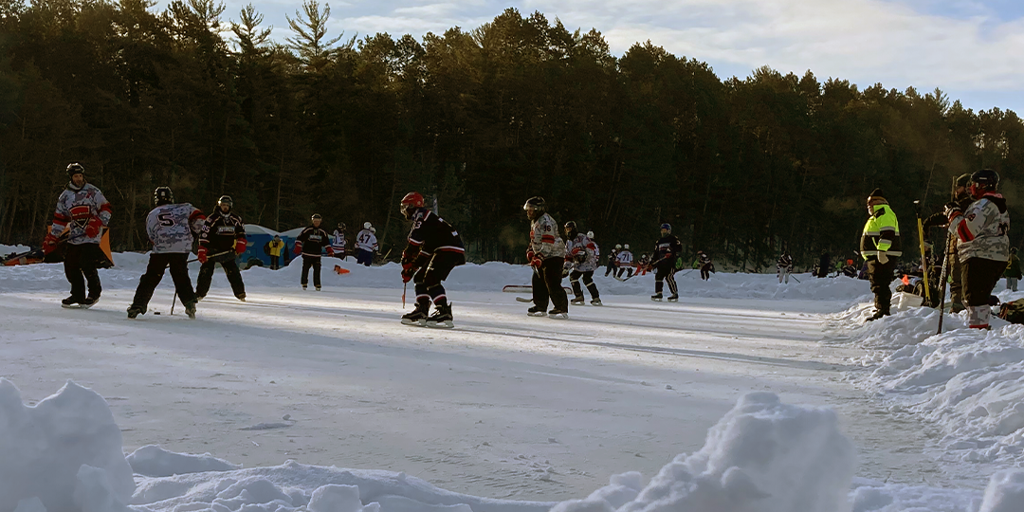