U.S. Officials Take It All In Stride In The Olympic Spotlight

Like athletes, an Olympic assignment is the culmination of hard work and sacrifice.

BEIJING – With three IIHF Men’s World Championships and almost a decade of ECHL experience to his credit, Stephen Reneau knows how to keep his cool on the ice. But in the hours after receiving the news that he would be working as a referee for the men’s hockey tournament of the 2022 Olympic Winter Games, his heart was racing so fast that his Apple watch asked if he was all right.

Reneau initially received the disappointing news that he had not been selected to join fellow American referee Andrew Bruggeman and linesmen Brian Oliver and Billy Hancock as part of the officiating crew tabbed to work the Olympics. However, in these crazy Covid times, Reneau told himself to be prepared in case someone had to drop out due to a positive test.

The call finally came in the hours leading up to an AHL game he was slated to work in Las Vegas. He had hit the Olympic jackpot.

“I was having my coffee before the game and at 5:45 my phone rings saying, you’ve got to figure out a way to get tested tonight,” Reneau recalled.

That call was both a life changer and a game changer. In addition to changing his flights and clearing his schedule for the next two weeks, Reneau had to track down an all-night testing facility. In a town that offers all-night drive thru weddings, finding a 24-hour Covid clinic wasn’t a tall order.

“It was a wild 48 hours, that’s for sure,” said the Overland Park, Kan., native. “Just the anxiety of waiting for my test results to come back from the Chinese approved lab, I actually got a notification on my watch asking, ‘are you OK because your heart rate’s racing and you’re just sitting still.’” 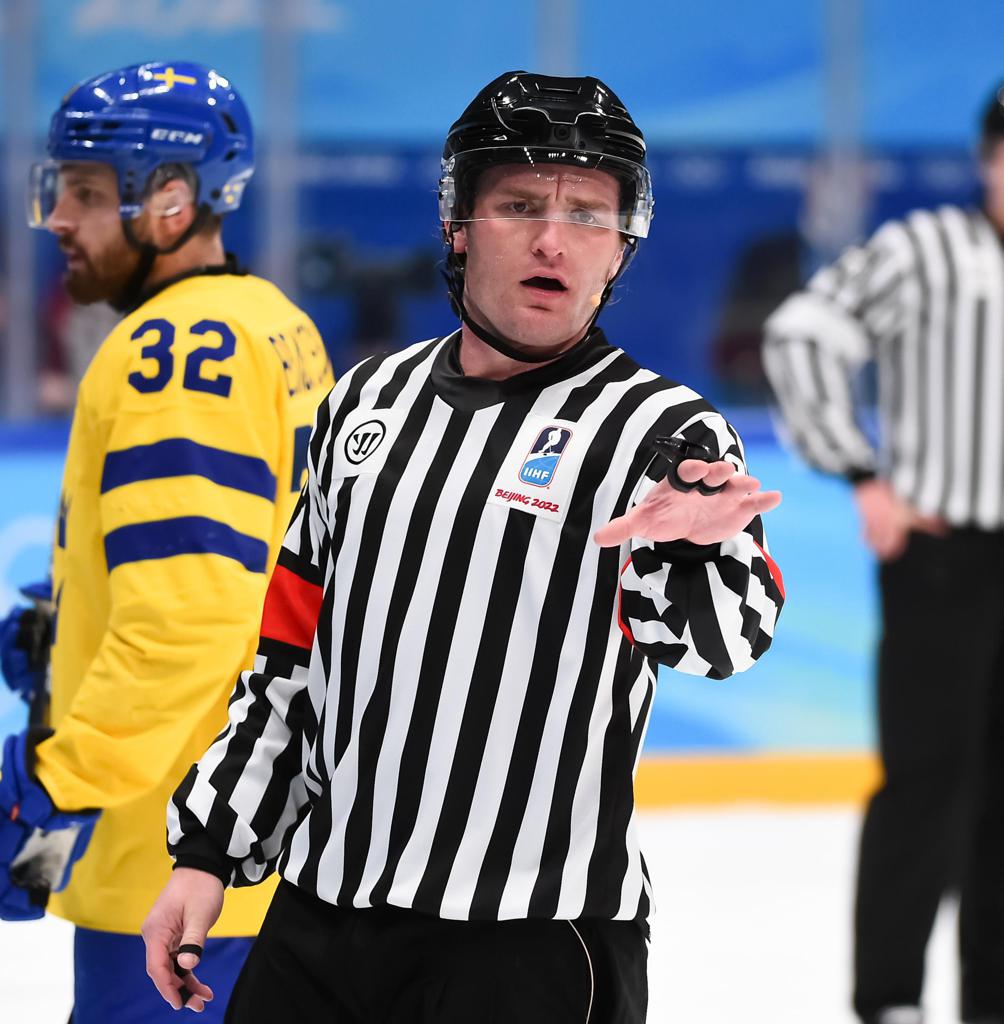 Getting the opportunity of a lifetime will have that effect on some people, even those who have spent decades working at the highest levels of the game.

Like the athletes, earning an Olympic assignment is the culmination of years of hard work and sacrifice. For officials, it usually means starting out working local house league games before slowly moving up the officiating ladder.

Every official receives a huge boost along the way from USA Hockey’s officiating program that provides education and mentoring at its various camps and clinics held during the year.

Hancock remembers answering a camp questionnaire that his goal was to work the Olympics, and several years later here he is.

“I think I can speak for all four of us and say that we all had this as a goal in our careers,” said the Huntington Woods, Mich., native.

“Just being here is an absolute privilege and an honor, but you obviously want to work deep into the rounds.”

Bruggeman did just that, drawing the honor of serving as one of the two referees to work the semifinal game between Sweden and the Russian Olympic Committee.

The fast-paced and often-heated game between two fierce international rivals needed a shootout to settle the score, and Bruggeman was more mentally than physically exhausted when it was over.

“I was pretty drained,” the Mankato, Minn., native said. “It was one of the more difficult games I’ve ever had. We had a lot of 50/50 [puck battles] where it’s marginal if you call a penalty, not call a penalty. So there were just a lot of difficult decisions in game, and I talked with [officiating partner] Olivier Gouin after the game and we were both just exhausted. That one really tested us.”

Oliver’s selection to work in his first Olympics continues the legacy of officiating excellence in upstate New York. The long-time linesman is the sixth Rochester, N.Y., area official to work an Olympic Games.

Working games in a bubble in front of only a small number of hand-picked fans took some getting used to, but once the puck dropped it was game on for every officiating crew.

“Once you’re on the ice you kind of forget that there’s nobody else in the building because you’re so focused on being in the game,” said Oliver, who has extensive experience calling games at the collegiate, professional and international levels. “You definitely have the energy of the crowd to feed off of but the intensity is there from the teams and the players.”

Like all the officials who are working Olympic games, they have earned the right to be here. Bruggeman has a decade’s worth of experience working in both the ECHL and AHL and has officiated the IIHF World Junior Championship as well as the BioSteel All-American Game. None of that can compare to the thrill of working under the glow of the Olympic flame.

“We’ve all been in big pressure situations and we handle nerves and excitement really well,” he said.

“But the nerves are there and just when you finally hit the ice and you get to take that lap, you look around and say, ‘holy [cow], we’re here. It’s real, we’re working games. Then you settle in and it’s just work.”

Hancock said he has another thought as he takes that first lap around the rink.

“The IIHF does a great job of making a big deal about who the officials are,” he said. “The second we step on the ice they announce your name. So now there’s even more pressure on you when you hear your name being announced in English and Chinese.

“It’s a little different feeling than it is back home where we step on the ice and no one notices us.” 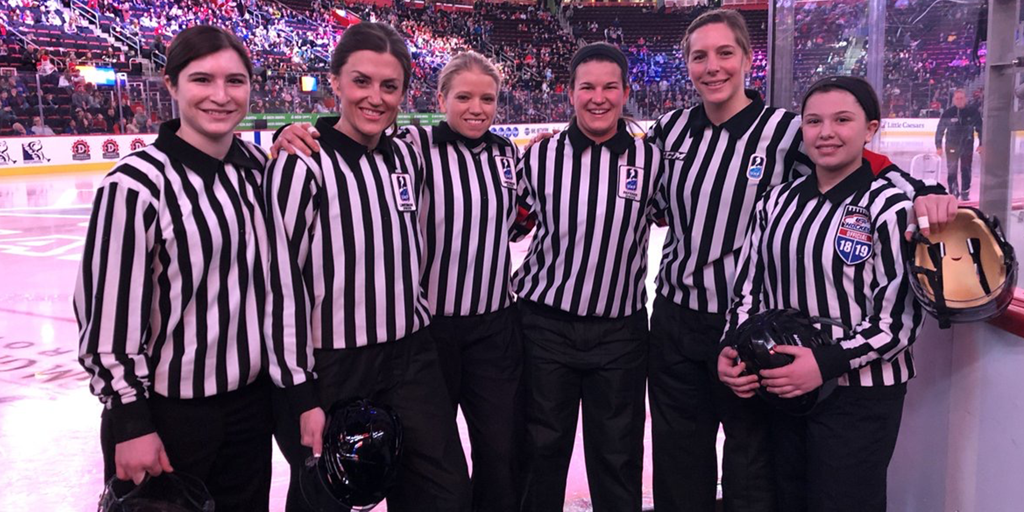 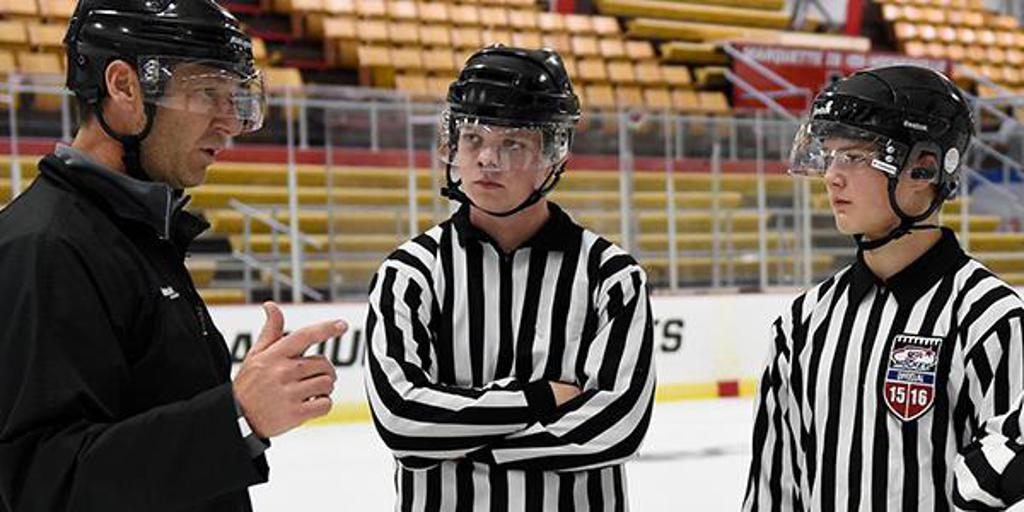