Stephen Nelson Tries On Headset of a Legend with Blackhawks

Never slack on a shift. Value the unheralded role players. Bury your scoring chances. Know when to make a pass and share the glory.

Stephen Nelson has cemented hockey’s purest principles for success. Working for multiple pro teams and networks covering them in assorted behind-the-scenes and on-camera capacities has only strengthened his appreciation. Ditto his tasks as an NHL Network studio host.

Still, having amassed barely two dozen games as a play-by-play announcer, he exudes classic hockey humility over his latest break.

As 39-year veteran Pat Foley made 2021-22 his swan song with the Chicago Blackhawks, NBC Sports Chicago rotated four guest broadcasters in his place for select games. Nelson was in that mix, debuting at a Nov. 17 visit to Seattle.

“I’ve been very, very lucky to work with some incredible people,” he said. “So with that in mind, I don’t want to take it for granted, assume that I will be given more opportunities.”

He added, “This is a headset that tons and tons of people would kill to wear.”

Especially if they were raised on the franchise in question, as he was.

Nelson’s father moved from suburban Chicago to Southern California before starting his family in the 1980s. The household insulated steadfast Windy City allegiances and fostered active interests in hockey. When they weren’t sporting replica jerseys at home, both parents played in adult leagues while Nelson broke ice in the youth ranks.

His childhood sports scene also bolstered his sense of belonging as a Japanese-American. Per a 1991 Los Angeles Times report, Asian-Americans comprised 8 percent of Huntington Beach, Nelson’s hometown, at the time. That contingent has consistently grown since then, and one representative entered a key position to further Nelson’s fascinations. 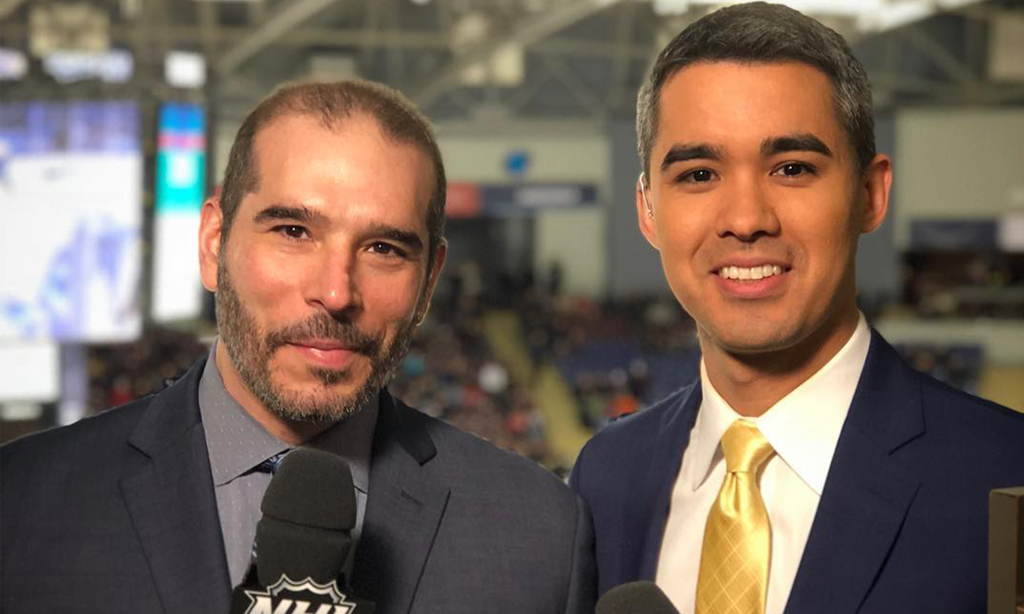 Rob Fukuzaki joined L.A.’s ABC affiliate as a sports anchor in 1994, becoming the market’s first male Japanese-American newscaster. Reaching the age where realism gently benches most dreams of professional athleticism, Nelson watched Fukuzaki and assured himself, “there’s another place for me in sports.”

Meanwhile, despite resisting the local Wayne Gretzky-powered bandwagon, Nelson looked up to another marvel. Bob Miller — the Kings TV voice from 1973 to 2017 and, incidentally, another Chicago transfer — imparted his wisdom upon a chance encounter with an opportunistic Fox Sports West intern in 2010.

“The thing that stuck with me most from that conversation was just the preparation,” said Nelson. “It didn’t matter if it was a pivotal postseason game or in the dog days of the regular season against a last-place team. Somewhere, somebody’s listening, maybe a fan of that last-place team, and they deserve as much energy as your team or any other franchise.”

The resultant habit of “over-preparation” bore its sweetest fruits in 2019, when Nelson started calling the IIHF World Junior Championship. Paired with color commentator Dave Starman, he absorbed more enriching ice chips as he built his game log in earnest.

Following a given telecast, Starman cited the play-by-play rookie’s plus points and constructively critiqued the blemishes. There were times, such as routine scrums in the corner, that warranted fewer words.

So when Team USA defeated Canada for gold in 2021y, with more fans getting their fix through his work one week before the pandemic-delayed NHL season, Nelson knew what to do. The celebratory mob around goaltender Spencer Knight typified those moments when, in Nelson’s words, “letting the images do the heavy lifting” is best.

When it comes to diversity, though, he will not hesitate to lead the rush. There he is part of the image.

“Every chance I have to talk about this, I jump at it because it means so much to me,” he said. “Hockey especially has to do a better job of improving its representation in positions of influence and power.”

At least one other Japanese-American has had a memorable run with an NHL team’s broadcast channel. From 2008 to 2013, Naoko Funayama relayed rinkside dispatches for Boston fans on the New England Sports Network. She more recently contributed to NBC’s coverage of the Tokyo 2020 Olympic Games.

Nonetheless, there is “not enough” of his demographic in his profession. That same statement applies to other marginalized communities, although Nelson’s employers bear some symbols of progress.

“The sport is getting better at it slowly,” Nelson granted. “But for me, yeah, I think I’m always going to fly the flag for Japanese-Americans, Asian-Americans who love the game like I do, like my family does. Just try to be there for those who look like us.”