Sled Classic Returns in a Celebration of All Things Sled Hockey

After a year off due to pandemic, the classic is back for an 11th edition

It’s probably fair to say that no one is more excited about the 11th annual USA Hockey Sled Classic, presented by the NHL, which will take place Nov. 18-21, 2021, than 2018 Paralympic gold medalist Jack Wallace.

“I grew up in Bergen County, New Jersey, in Franklin Lakes,” Wallace recalled. “The NHL Sled Classic this year is going to be held in Wayne, New Jersey, which is actually the rink that I learned how to skate at.

“So, I'm super excited. The Devils are sponsoring a team, and [it’s] going to be a really fun time playing sled hockey with the New Jersey Devils jersey on.”

Wallace, a 23-year-old member of the U.S. National Sled Team, hopes to make his second appearance at the Paralympic Winter Games in February in Beijing after helping the U.S. to gold in 2018. He told the “Speak of the Devils” podcast that the sport continues to grow.

“[Sled hockey keeps] getting bigger and bigger,” Wallace said. “The Devils are going to be sponsoring their first team at the Sled Classic, bringing plenty of notoriety to sled hockey in New Jersey. Hopefully, the club teams can start flourishing again like when I first joined, and I'm super excited to be a part of that.”

The Devils will play host to this year's event at the Ice Vault Arena. The Sled Classic will feature 27 teams, representing 17 different NHL clubs. All the games will be streamed live on HockeyTV.com. 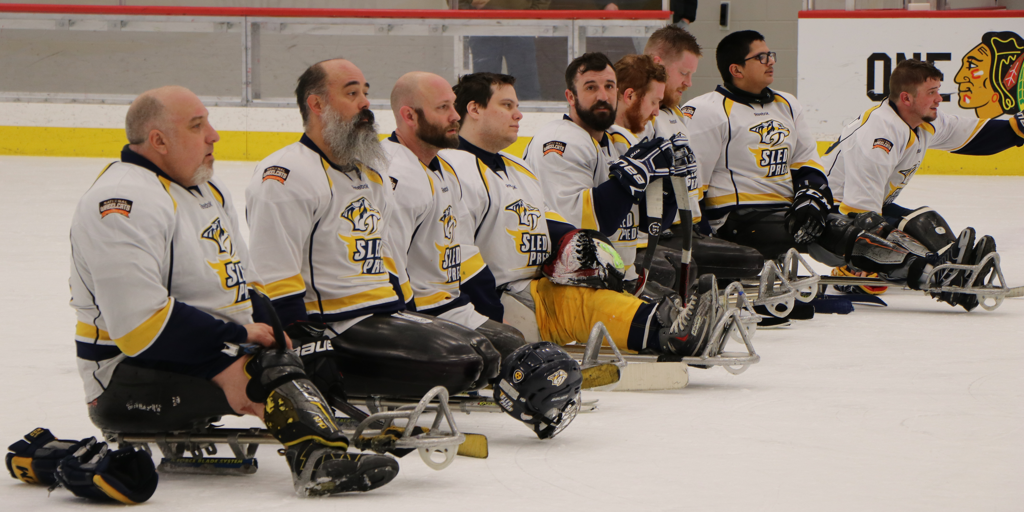 “That is the rink that I played club hockey in as a kid,” Wallace said. “So, I am beyond excited to get back there and be playing.”

Wallace added that support from the NHL overall was quite important to the viability of sled hockey in the U.S.

“It’s no mystery that hockey, in general, is an expensive sport to get into,” Wallace said. “That’s why these grassroots programs are so important.

“But that takes another step up when you’re talking about sled hockey because not only do you have to buy all the hockey equipment, you then have to buy specialized sleds … and the sticks. You can’t just walk into a pro shop and pick that stuff up.”

The annual round-robin format tournament between NHL-affiliated teams began in 2010. That first Sled Classic included four teams and 46 players and has experienced explosive growth since.

During the Sled Classic, USA Hockey will host a “Try Hockey for Free” event for students from the John F. Kennedy School in Newark, New Jersey. The event will be held on Nov. 20 at 2 p.m. at the Ice Vault and will provide boys and girls the chance to try sled hockey for the first time.

Wallace’s own Paralympic dream was born at the Ice Vault when he was 11 years old and fellow Garden Stater and current U.S. teammate Josh Pauls visited with his gold medal from the 2010 Games.

“He brought that gold medal back to our local program and showed it to me,” Wallace remembers. “That's really when it happened, and I set my sights on potentially making the U.S. national and Paralympics teams.”

Wallace began as a standing hockey player and then moved to sled hockey while growing up in New Jersey.

“From the time I could walk to right now, my life has revolved around sports. I pride myself in being an athlete. Even if you're not at an elite level, even if you're not trying to go to the NHL, or the Olympics, or the Paralympics, it really can still change your life in a positive way.”