When Justin Evilsizer was in middle school, he always walked with his head down, not interacting with anybody.

The special needs Minnesota student wasn’t comfortable enough to embrace his peers and surroundings. However, thanks to hockey, Justin has a new sense of confidence and chin-up approach to the halls.

“It helped him grow and get exponentially more outgoing and more confident in himself,” said Brian Evilsizer, Justin’s father. “He’s grown exponentially by being in Minnesota Special Hockey.”

Justin, now 25 of Plymouth, has played with Minnesota Special Hockey for about a decade with three different teams.

Minnesota Special Hockey is a stand-up ice hockey program for people of all ages with developmental disabilities. The organization’s goal is to be the place for any athlete that wants to play hockey in Minnesota, according to Susie MacMillan, a founding board member.

“We can fill the need for anybody that wants to play that isn’t able to play somewhere else,” MacMillan said.

Before the COVID-19 pandemic, Minnesota Special Hockey included 287 athletes on 15 different teams and last year that number was still more than 200 with teams in Moorhead, Alexandria, Duluth, St. Cloud and all over the Twin Cities metro area, according to MacMillan. From ages 5 to 55 with A, B and C levels of skating, Minnesota Special Hockey promotes these players to play the game that they love and also play competitively, MacMillan said.

The season, played on Sundays, starts in early November and goes through February.

One of the organization’s highlights is having about a dozen of its players skate with NHL players for a Unified Showcase held between playoff games of Da Beauty League, a 4-on-4 summer league held at Braemar Arena in Edina for NHL players who have Minnesota ties.

The NHL players and Minnesota Special Hockey players are out on the ice, playing together, making sure everyone has a chance to enjoy the game of hockey.

A total of about 60 special hockey players have skated in the showcase since it started in 2017, MacMillan said.

“I mean, who wouldn’t want to play with [Zach] Parise and all of those athletes that are out there?” MacMillan said. “There’s a lot of [NHL players] that have been there year after year and they’re just super supportive of our players.” 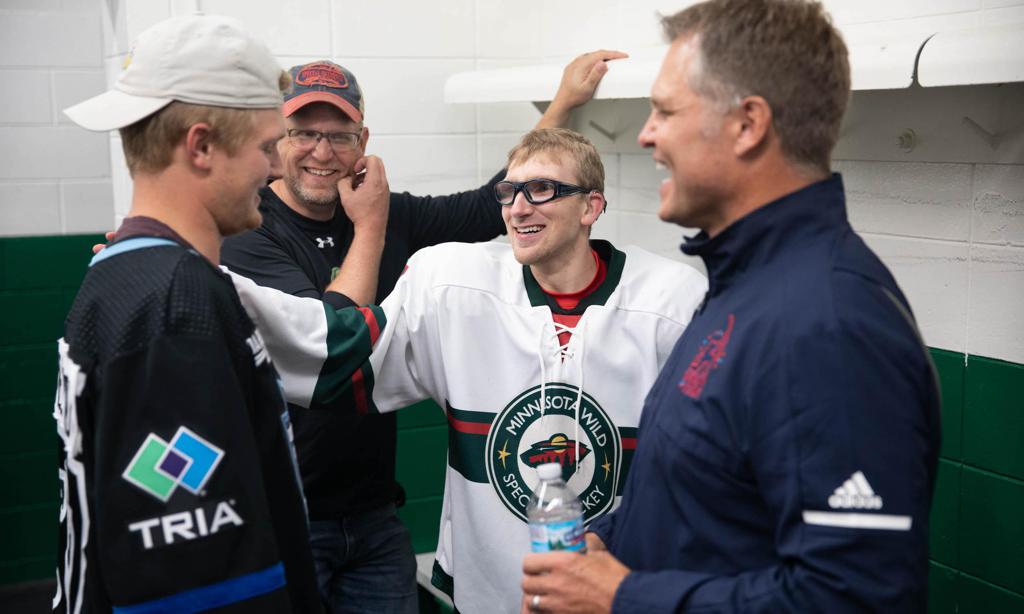 Players like Riley Tufte, Jake Guentzel, Nick Leddy, Alex Stalock and Parise have participated and skated with the Minnesota Special Hockey players, giving them high-fives as they enter the ice. A few players each year, such as Casey Mittelstadt, Brock Boeser, Jason Zucker and Nick Bjugstad, make it a point to visit with the Minnesota Special Hockey players before and after the skate.

Justin Evilsizer, who got season tickets to Da Beauty League this summer, skated with the NHL players. He also had the chance to sit on the bench next to Parise and watch his favorite skater, former Wild forward Jason Zucker, participate in Da Beauty League. Justin recognizes the NHL players by their numbers, his dad said, because that’s how he sees them when watching their games on TV.

Those closest to some Minnesota Special Hockey players have seen how the league is beneficial for more than developing hockey skills.

“It’s how to deal with adversity,” Brian Evilsizer said. “[Justin] doesn’t understand that that’s what he’s recognizing or what he’s learning, but those are just intangibles that he’s getting out of it.

“It gives him such memories that he’s not able to get in just interacting in his everyday life. From my perspective, it’s an opportunity that our kids would normally never get.”

Brock Faber, a 2021 IIHF World Junior Championship gold medalist who is entering his sophomore season as a defenseman with the University of Minnesota Gophers men’s hockey team, has watched his older sister, 21-year-old Paige, play with Minnesota Special Hockey. Paige was one of the players to skate in the Unified Showcase this summer.

Faber sees the passion his sister has for hockey. More than playing with NHL players, having cheering fans beyond just family and friends watching her skate was the most special part about it, Faber said.

“Having a crowd there to watch them play, I think that was a huge thing for her,” Faber said. “It made her feel like it was a super-big event, which it was.”

Faber has watched Paige play hockey and her other sports, like floor soccer and softball, as well. He’s amazed watching how much fun she has, calling his sister “quite the athlete.”

“It’s amazing to be able to go and watch her and see how much fun she has,” Faber said. “It’s obviously something I can learn from, too.”

At the level Faber plays hockey, it can be almost like a job for him, but he sees the smile Paige has on her face when she heads to the rink to play. He also knows there are a lot of kids out there who are passionate about hockey but haven’t gotten the opportunity to play.

“That’s the biggest thing that I’ve really learned from her is just being thankful for everything,” Faber said. “Every time she gets to skate, whether it’s once a week or four times a week, whatever it is, she’s thankful and glad to be there. And I think that’s one huge thing I take away from her.”