For Chris Brown, Embracing Chaos Was One Takeaway from Coaching Symposium

The Dallas-area youth coach was forced to push his plans back one year and attend the four-day event this past August in Duluth, Minnesota.

It was worth the wait.

Some key speakers showed videos breaking down youth practices and Brown feverishly jotted down notes and sketched some drawings on his notepad.

“Sure enough, the first practice that I came back from Minnesota, there were drills that I was immediately running and trying to see how they worked, how I could incorporate it for players at my age group and they were still effective,” Brown said. “Primarily, these were coaches that were NHL coaches, U.S. national team coaches as well as AHL coaches, so the first thought in your mind is certainly if you’re coaching 12U like me is can I actually do this with 12Us? For the most part, everything that they showed were things that you could take all the way down to 12U, even 10U. That’s the best part about the whole thing, these are excellent drills and I can prepare my younger kids for success in hockey by starting these kinds of drills already.”

Brown coaches his son’s 12U house team in the Dallas Stars Metro Hockey League and also coaches a 12U girls travel team through Dallas Stars Elite.

Brown’s biggest takeaways came from the primary focus of the symposium: how to orchestrate game-like scenarios during practices.

“The thing that I got out of it was with our practices, I always thought that we put together some really good practices,” Brown said. “I’ve done [American Development Model]-style practices. I’ve done full-life practices with travel teams and various other teams. The practices that we put together I always thought were really good, but then after going to this symposium, I learned about all the small area games focus as well as different ways to get that compete factor with your practices and then also things like rewarding good behavior that they do on the ice in certain ways.

“You really get what you need out of your players if you are really focused on creating those game-like scenarios, where it would be in small areas or even just a third of the ice or something like that. You don’t necessarily need to be sitting there doing X’s and O’s — those are things you can do off the ice.”

Brown is looking forward to implementing more compete factor — as he referred to it — in his teams’ practices. He isn’t reinventing the wheel when it comes to his practice plans, he’s just tweaking them.

“I have sheets and sheets of practice plans that I’ve put together, either as a head coach for one team or a couple years ago I was the age-specific coordinator for 10U hockey phys ed. It’s anywhere from 35 to 50 kids I was coaching and I’ve put together these ADM-style practice plans,” Brown said. “What I’ve been doing is going back through those and seeing how can I add some more of these things on there that are increasing the compete factor and another big thing to me is like, increasing the level of communication with the kids.”

Brown has always told his players they need to talk on the ice. One day he realized that unless talking amongst players happens during on-ice practice, it’s not to be expected to happen during a game.

“I do things as simple as, okay, if they pass the puck to the coach and get the puck back, I’ll do something as simple as you have to call for the pass before you get back,” Brown said. “Of course, they won’t and then I won’t give them the pass. They’re looking at me like, ‘I’m here. Give me the puck.’ And they have this blank look on their face like, is he going to pass it? I’m like, ‘No, I’m not going to pass it. Not until you call for the puck.’”

“It’s taking the drills that we currently have and adding some conflict to it, adding some chaos to it. Those were really some of the buzzwords that were being spoken throughout the weekend. Chaos is really what the game is really like, so let’s add that chaos into your practice plans.”

Coaching his way up

Brown has taken a non-traditional path to become a hockey coach.

He was born in Chicago and moved to Minnesota and New Jersey at a young age. He hadn’t picked up hockey yet, and by second grade, his family moved to Texas where youth hockey at the time was non-existent.

Brown wanted to get his daughter and son to appreciate and try the sport, so he got them involved. He was coaching his son one-on-one when he got a call from a Dallas coach in 2014. There was a need for a youth head coach and Brown took the opportunity. 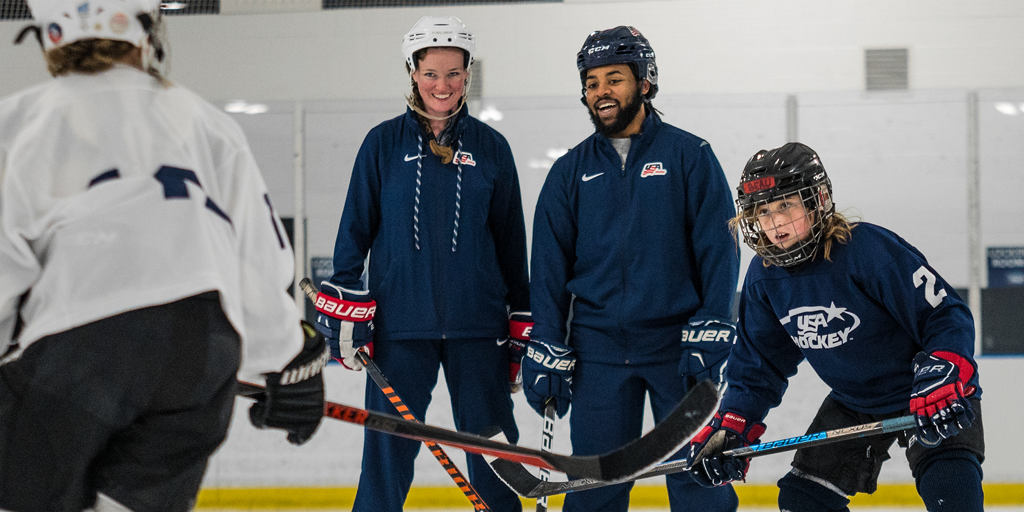 Brown’s daughter, Amelia, is now playing hockey at Western New England University — she also comes back to Dallas to help her dad coach — and his son is on a 12U team he coaches.

Brown is always trying to recruit the next parent to become a coach just like he did. He has a special message when he talks to parents.

“What I tell them is, ‘For everything that I’ve been doing for coaching and stuff like that, nothing has been more rewarding to me coming up from the background that I had in coaching than watching the players that you have develop over the year, whether it’s your child or all the other children that are on the team,’” Brown said. “It’s just the reward of watching these kids grow and watching them go out there and have fun and realizing that you have a really big impact on their love for the game and their development within the game.”