At 81, Ludy is still skating and still organizing tournaments for others

Emil Ludy is used to being the oldest hockey player on the ice.

However, two years ago when he played for the United States team against Canada in the annual Canada 150 Cup, Ludy was the second-youngest player on the team. The team is comprised of players who are over 80 years old or turn 80 that year.

As the second-youngest player on the team, the 79-year-old Ludy had a little extra pep in his step. That’s saying a lot, because Ludy has the energy level of a 25-year-old.

Now a spry 81 years young, Ludy lets hockey fuel his everyday life. He still skates a couple times a week during the winter and organizes multiple teams to compete in as many USA Hockey tournaments around the country as possible.

Ludy, who lives in Wheaton, Illinois, played in an A division men’s league with his kids and grandkids until he was 71. But that, unfortunately, had to stop. While traveling to a hockey tournament, Ludy suffered a blood clot and ensuing pulmonary embolism. 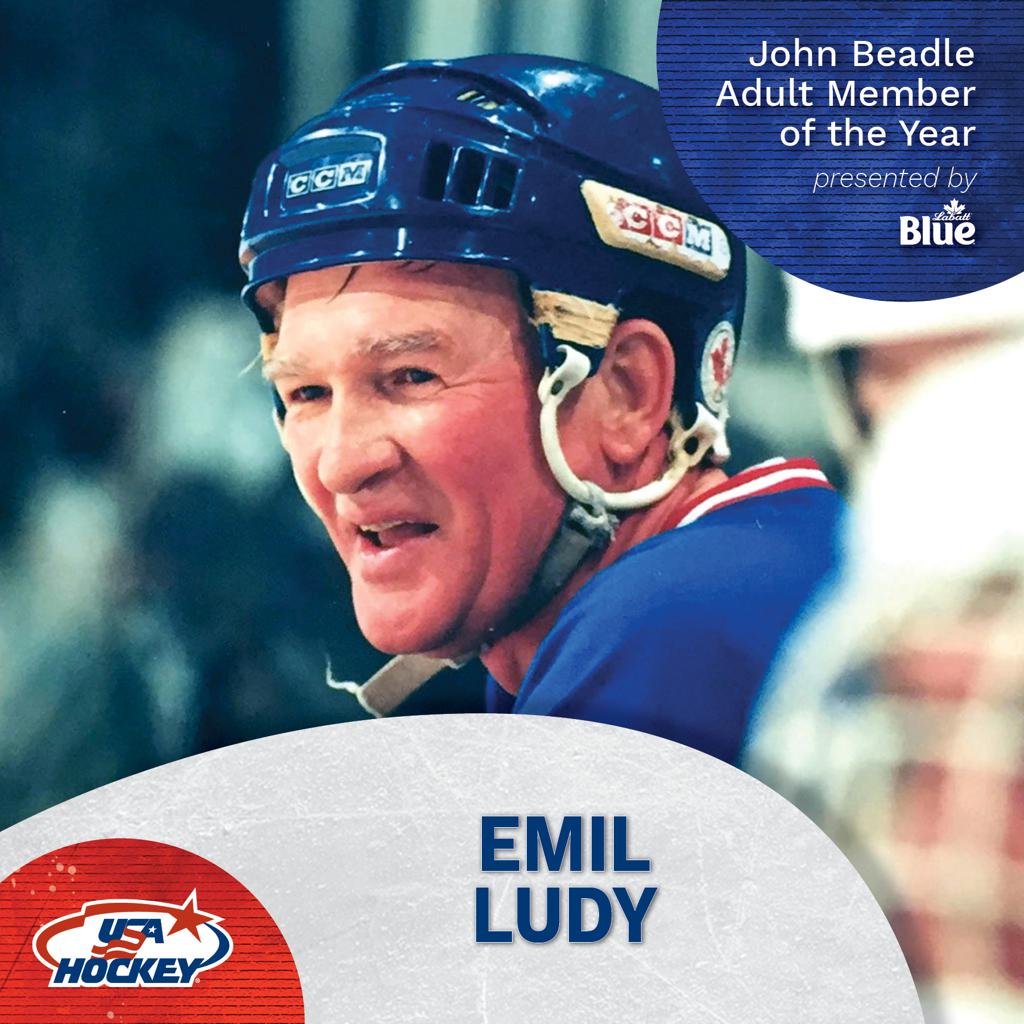 “My doctor came into the room, and I had bronchitis,” Ludy said. “My leg started hurting and he sent me to the hospital. He came in and he said, ‘Looks like your hockey days are over.’ I said, ‘Doc, you don’t really understand hockey players.’ I’ve played 61 tournaments and been on the ice a thousand times since then.”

For his continued passion and dedication to hockey, Ludy has been named the recipient of the 2021 USA Hockey John Beadle Adult Member of the Year Award, presented by Labatt Blue.

“It’s big, but I accept it based on all the other guys that came before me, the ones that have passed on,” said Ludy, who retired as an insurance agent in 2002.

Dean Weiss, who has played with Ludy in USA Hockey Adult Nationals for the last decade-plus, is happy his friend is getting the recognition he deserves.

“He has thrown his whole life into hockey,” Weiss said. “That’s not how he made his living, but he coached at the college level. He still runs these teams. Especially when you’re 70, it’s hard to put a team together, the guys are from all over the country.

“Besides just being a wonderful human being, he throws his whole life now into hockey and making these tournaments work. It’s a lot of work to get a bunch of guys together and pay and play and show up and be competitive.”

Ludy started playing hockey in the late 1940s and never stopped. It’s always been an important game to him.

With rinks around Illinois closed due to the pandemic last year, it was tough on Ludy not being able to play hockey and socialize with friends on a weekly basis.

“I’d look for ice anywhere,” Ludy said. “I’d go to Peoria at 8 in the morning and I’d be the only one out there — stick and puck, by myself.”

Since Ludy doesn’t play in adult leagues any longer, he stays busy on the rink with pickup games and skates with friends on Mondays and Fridays in Bloomington.

And Ludy can still keep up on the ice with the guys, according to Weiss.

“He’s still got the edge,” Weiss said. “He’s still out there hustling. He doesn’t take crap from anybody. He’s still a little chippy, but it’s great.”

Ludy’s big thing is competing in USA Hockey tournaments around the country. He’s traveled to Las Vegas; Scottsdale, Arizona; Rochester, New York; Blaine, Minnesota; Coral Gables, Florida; Laurel, Maryland and Danbury, Connecticut. For the last 15 years, he’s been playing in tournaments with a group of guys from Illinois as well as the Central Massachusetts Rusty Blades.

During his extensive run playing in USA Hockey-sanctioned events, Ludy and his teams have taken home four championships and seven runner-up finishes. Ludy’s teams won Adult National Championships in 2011, ’13, ’15 and ’16 in 50-and-Over divisions.

“Everyone knows he takes this seriously,” Weiss said. “At 81, he’s still as competitive as I’ve ever seen any human being.”

Winning is fun, but that’s not what it’s about for Ludy.

Ludy, who helped found and coach the Illinois State University men’s club hockey program, is all about playing hockey with the guys. Nicknamed “Emil the Cat” by his hockey friends, Ludy could have an hour-long game but be at the rink for another four hours after watching games and schmoozing, noted Weiss.

Ludy is a well-known and well-liked guy by his teammates and opponents. Weiss has plenty of stories about Ludy, who is a big jokester.

“He is the biggest name-dropper we have ever heard,” Weiss joked. “A lot of these ex-pros are still playing when they’re older, and every time he comes into the locker room for his pregame speech, he will drop a name from an ex-pro that he talked to at a tournament. He does it every time. It’s hysterical.”

Ludy already has a couple hockey tournaments lined up for later this year. He’ll compete in Nashville in July and play for the second time in the Canada 150 Cup in Ontario in October. He takes inspiration from playing with and against guys that are older.

“There’s an amazing number of 80-year-olds that are still playing,” Ludy said.

This won’t be Ludy’s final year ever playing hockey, not by a long shot.

Duluth, Minnesota, native Mark Sertich played until he was 99 years old. He passed away in July 2020.

In Ludy’s mind, he has 19 more years left in him. It’s safe to say, nothing will hold him back from achieving that goal. 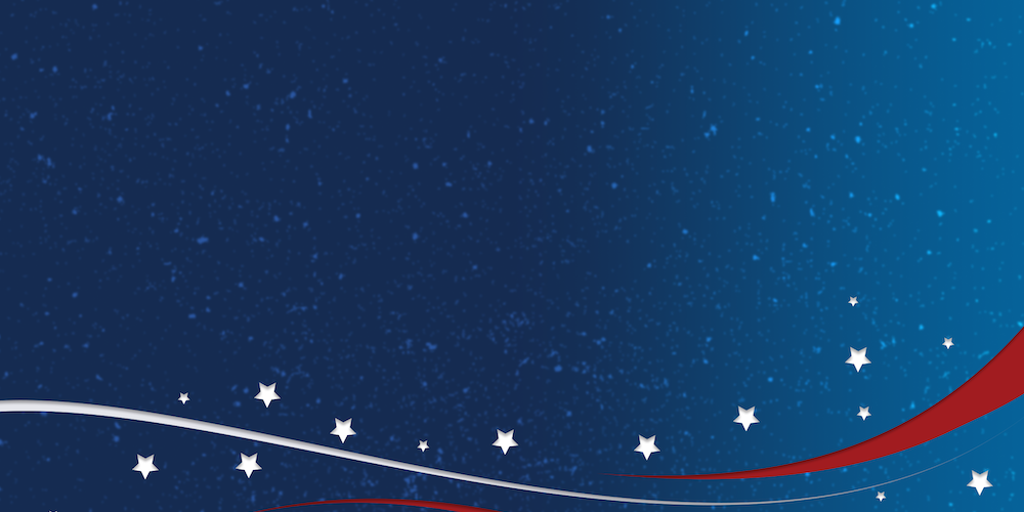 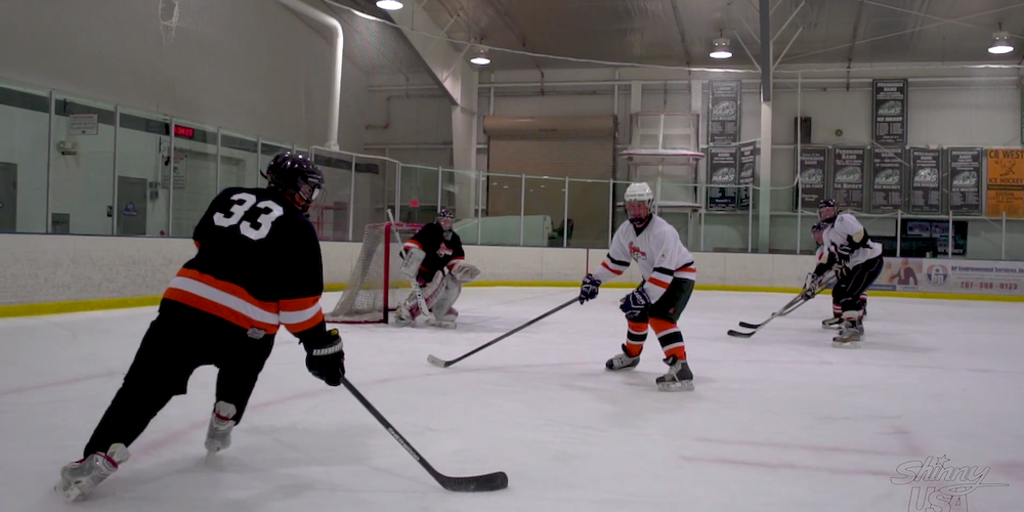 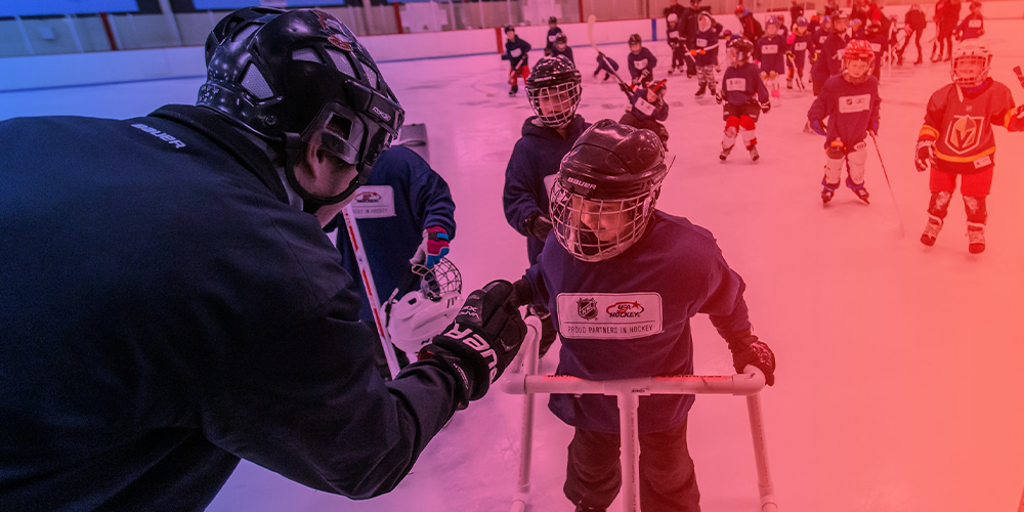