Rileys have coached the Black Knights since 1951

It was a moment seven decades in the making for Army West Point men’s hockey coach Brian Riley and his family.

It was no ordinary victory when Riley led the Black Knights to a two-goal road win against American International in January. The victory was the 1,000th combined win for the Riley family, whose long, storied legacy of leading the Army hockey program stretches back to the 1950s.

“It’s not really about the 1,000 wins, but more about the 70 years the Riley family has had the honor and privilege of coaching here at West Point,” Brian Riley said. “My first thought was my dad and my brother, obviously because they spent a lot of time at West Point, but I also thought about all of the relationships that we’ve been able to make during these 70 years.”

There have only been three men’s hockey coaches at Army in the past 70 years.

“[Blaik] convinced my dad to talk to him about the job,” Brian Riley recalled. “My dad told him that he would do it for a year, and then one year turned into 36. But I think that allowed my mom and dad to raise a family here, so naturally, there’s four boys and a girl just living at the rink all the time. Being around hockey so much and watching my dad, it was probably inevitable that some of us were going to get into it.”

Jack Riley, an inductee of both the United States and International Ice Hockey Federation Hall of Fame, led the U.S. Olympic hockey team to its first gold medal in 1960 and retired from coaching in 1986 as the second-winningest college hockey coach in NCAA history. He remains Army’s all-time winningest coach with 542 wins in 36 years.

Rob Riley — Jack’s son and Brian’s brother — took over as men’s hockey coach at Army and led the Black Knights to 257 victories in 18 seasons. The two remain the winningest father-son coaching duo in college hockey history with 799 victories.

Brian Riley, Jack’s youngest son, was named Army head coach in 2004. He has guided Army to 201 additional victories and counting to put the family above the 1,000-win mark. 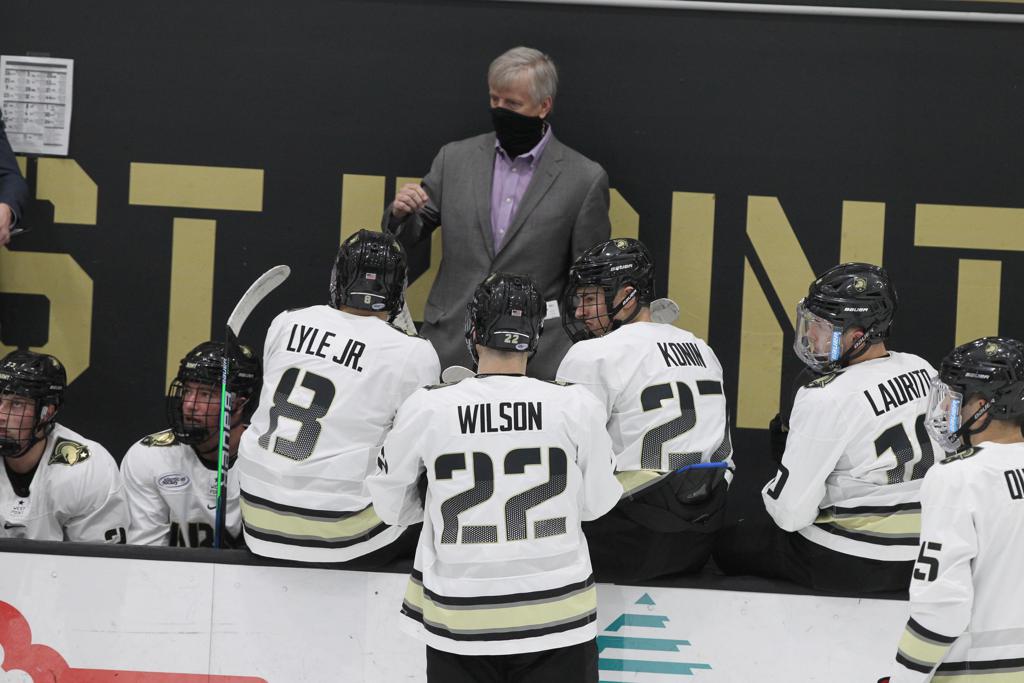 “I never imagined I’d be the coach here at West Point,” Brian Riley said. “To kind of follow in my brother and my dad’s footsteps, it’s a dream come true. I’m really living a dream by being able to coach here.”

The family enjoyed another historic night one week later when Army hosted Long Island University, coached by Riley’s nephew, Brett Riley. It was the first Riley vs. Riley head coaching matchup since Jan. 2, 1990, when Bill Riley and UMass Lowell scored a one-goal win against Rob Riley and Army.

“It was neat to see Brett on the other bench,” Brian Riley said. “What a proud moment, not only for him, but his mom and dad … my brother Rob. And I know my dad and my mom, Brett’s grandparents, were looking down and were very proud of him.”

It was still a special moment for Brian Riley and the Riley family, as Army split the home series with LIU. The two are scheduled to meet again in February during another weekend set.

Until then, Brian Riley is just excited to add to the 1,000 wins compiled by his father and older brother at Army.

“I’ve always said that I don’t think I’ve ever won any games, and I think my dad and brother would probably say the same thing,” Brian Riley said. “I think a thousand wins at West Point just speaks more to the players because they’re the ones who have won the games over these last 70 years.”