Young Official Brayden Brotherton Inspiring Others to Earn the Badge

The 12U player has started his officiating career younger than most

When Todd Bell began taking his son Brayden Brotherton to Columbus Blue Jackets games, he noticed the boy was watching the referee and other officials as much as the players.

This didn’t come as a big surprise to Todd, who umpired youth baseball games for over 20 years. Brayden, a winger and goalie for the Columbus Ice Hockey Club (CIHC) Eagles 12U team, would analyze calls made during games, both as a player and a spectator.

“When he would play, he would complain about a call or non-call,” said Todd. “I would literally say to him, ‘If you think you would be a better official or know the rules, why don’t you do it yourself?’”

This past summer, Brayden decided to take his father’s advice. Another Eagles player had gone through the certification process, so Todd got in touch with the boy’s dad. He then reached out to USA Hockey and received the information needed to get started.

Before the pandemic, candidates were required to successfully complete classroom and on-ice instruction, an open book exam and a series of video modules to earn their officiating card and sweater crest. Currently, in-person sessions were replaced with Zoom calls covering different sections of the rule book.

“Brayden has a good IQ for the sport,” Todd explained. “With him knowing and understanding the game at an earlier age than a lot of kids, that was one of the reasons I kind of pushed him toward at least trying it.”

The first time he took the online exam, Brayden fell just two answers short of the required minimum. He passed on his second try, completed the video modules and earned his card and crest a week before the start of this season.

Even through the challenges, Brayden never lost sight of his objective.

“I knew at the end of the road I’d be officiating games,” Brayden said. “If I did it now, it would be behind me and I wouldn’t have to worry about it. Obviously, it paid off.”

Todd, who never played hockey, signed Brayden up with the CIHC Learn to Skate program when he was six. Brayden took to the sport almost instantly and would often put on the gear at home just for the fun of wearing it.

“The skating was hard at first, but when I got into it and learned how to do it, it was fun,” Brayden recalled. “When the stick is in your hands, you want the puck and then to score.”

Brayden officiated his first set of games in early November. Todd, who was unable to attend the first two, asked his son to text him between games with an update. The first words Todd saw were, “this is sooo….”

“I didn’t see what the next word was,” Todd explained. “I was scared. Then the last word was, ‘fun.’ When I saw that, I was relieved. All that we went through was worth it.”

Brayden believes officiating has made him a smarter player.

“Being on the other side and managing the game, skating around and making the calls is fun,” he said. “It definitely helps me understand the rules a lot more as a player.” 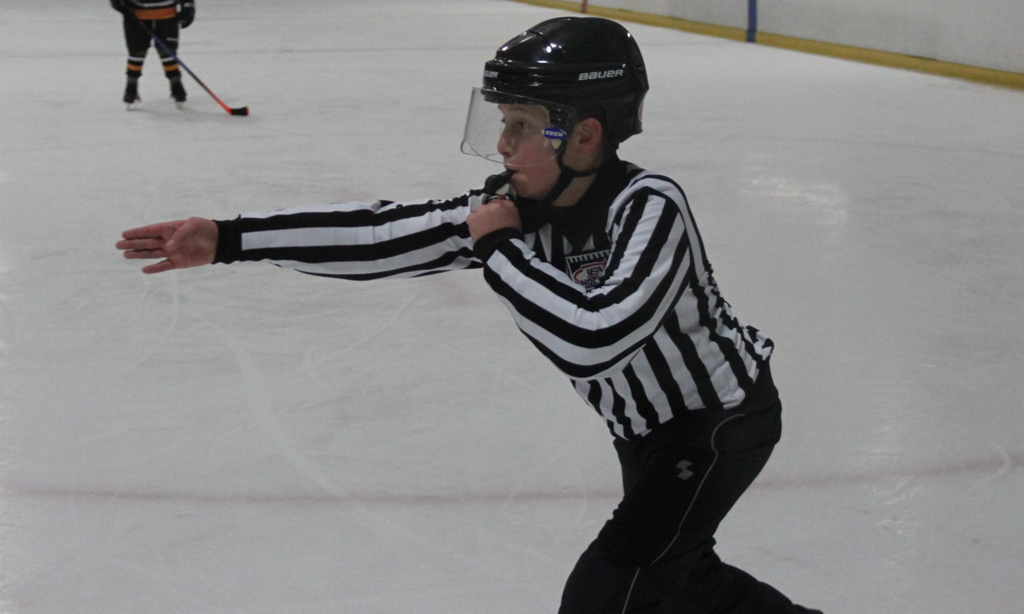 There have been some hiccups, including a tripping penalty Brayden accidentally called on the wrong team. On another occasion, he put his arm up to call a hooking penalty, then immediately lowered it before the call could be recognized. But the veteran officials working with him were patient, and Brayden has been quick to learn from his mistakes.

“Toward the end of the year when I’ve done a few more games, I’ll be more comfortable making those calls,” he said.

“I believe if you present this to 10- and 11-year-old kids, you’re going to get more takers,” Todd said. “That’s more officials that you didn’t have. I try and mention it to parents and say how you go about doing it.”

So does Brayden, who has convinced several of his friends to give officiating a try. His first few games have been at the house league level, but he hopes to start officiating travel games in the near future. He also wants other kids to be inspired by his example.

“If they like hockey, they’ll definitely enjoy it,” Brayden said. “It’ll change their perspective of the game.”