It had been a few years since Gerry Anderson had attended a USA Hockey coaching clinic. “Probably a dozen years,” to be more like it.

A lot has changed in coaching since then and a lot has gone on with Anderson and his hockey-centric family from Roseville, Minnesota, just this year.

Anderson last was a regular coach when sons Joey and Mikey were playing 14U. Now, both are just getting their NHL careers going, so dad decided to get back into the swing of coaching with a 10U team in Roseville. Having been out of the coaching loop for several years, he decided to freshen up with a Level 4 clinic.

Due to the COVID-19 pandemic, the 52-year-old — who helps publish judicial documents and related content for the Thomson Reuters news service — was given the option to do the clinic virtually. Instead of driving and sitting in a classroom atmosphere to listen to whoever was teaching the current topic, Anderson simply retreated to his makeshift office in Mikey’s old room to partake in the clinic via virtual learning.

“It's a completely different approach now,” Anderson said. “The age-specific approach and the focus on skill development and creating hockey sense through small-area games. It's dramatically different than when I went through this originally when my kids were at the younger ages.”

Part of that is due to USA Hockey’s new tact with its coaching curriculum. This summer is the first with the more interactive clinics that are more targeted for different age groups (8U, 12U and 13-and-over).

“Under the circumstances, it was outstanding and, in some ways, it was more engaging than merely going into a big room and sitting there listening to a speaker,” Anderson said. “To get people engaged by having breakout sessions with a smaller group of attendees and coaches to talk about whatever the topic was.”

What was most useful for Anderson was to see how much of a factor USA Hockey’s American Development Model (ADM) was in teaching young players. When Anderson participated in the Level 3 clinic a dozen years ago, ADM was just coming into play. Coaches in this particular clinic ranged from those for the 10U age group to the college club team level and were from various parts of the country, due to the virtual setting.

“I think being creative with some of the scoring and of some of the small-area games, instead of trying to make it a rote thing,” Anderson said of the new approach. “‘You need to make two passes before you can shoot' or without implementing things that don't really belong in the game. Saying a goal made after three passes is worth three [points] so you can encourage kids to play the game the way it's presented to them without forcing artificial rules into it, but yet still trying to add incentives to get to whatever behavior you want to get.” 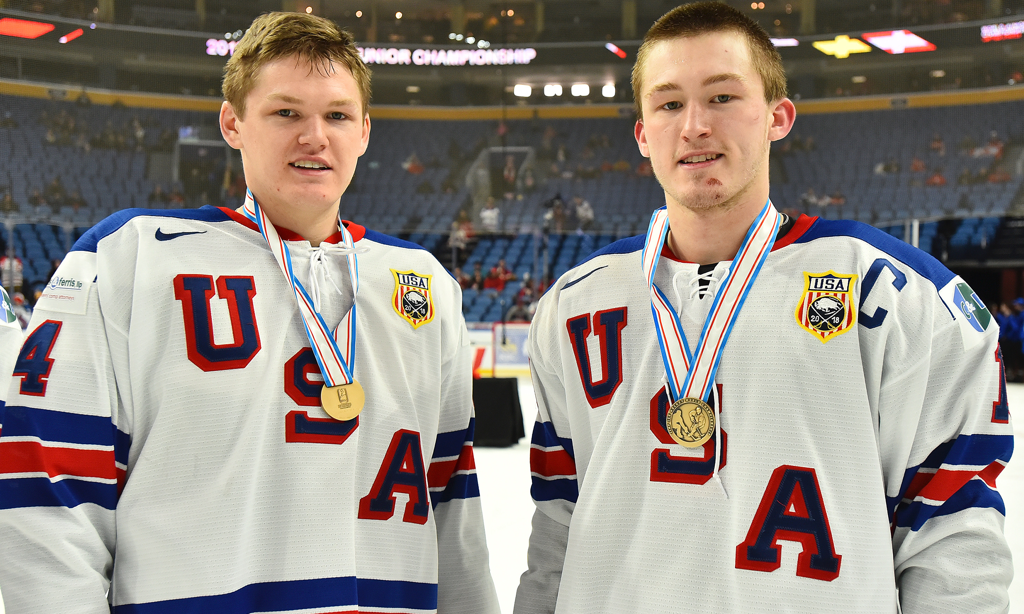 The pandemic cut the NHL season short and forced Joey and Mikey to leave their respective clubs, the New Jersey Devils and Los Angeles Kings, and return to Roseville, not knowing what was going to unfold. Neither team was participating in the Stanley Cup Playoffs as play resumed, but the brothers kept sharp by working out and even engaging in some garage hockey competitions. In a turn of events while at home, Joey would eventually be traded to the Maple Leafs.

With daughter Sami — who played collegiately at St. Scholastica in Minnesota — also back home after having just recently moved out, it also gave the family a chance for some unexpected bonding.

“That was the silver lining of all this right? None of us want to be going through this,” Anderson said of the pandemic restrictions. “I think my wife and I recognized pretty early that this was the last year that we were all going to be together in the same house under the same roof.”

The brothers’ presence also gave some of Anderson’s new 10U players — who began practicing at the start of October — a moment they won’t soon forget.

“It was really fun to bring the boys out to a practice and that certainly got the attention of the kids,” Anderson said of the 9- and 10-year-olds meeting the NHL players. “They did a couple little contests where it was the team against the boys and the final one, the team won and the boys had to do some end-to-end skating. You would have thought the little guys won the Stanley Cup when Joey's shot rang off the crossbar.”