Paul Martin played three seasons as a defenseman with the University of Minnesota Gophers men’s ice hockey team, helping lead them to back-to-back national championships in 2002 and 2003. He left the university, and his home state, after his junior year to embark on what turned out to be a 14-year NHL career.

As he recalls it was a very difficult decision for him to leave the Gophers.

“So, my mom was having a tough time, as well as my family, as well as myself,” Martin said. “So after that decision, part of the promise was to come back to school and get my degree for Beverly, for mom.”

Keeping his promise, Martin, an Elk River, Minnesota, native, is back with the Gophers this fall to finish his bachelor’s multidisciplinary degree. He’s also back with the men’s hockey team, taking a job to help the team on and off the ice as an undergraduate assistant.

He’s taking five classes this fall, which he admitted is a little overwhelming. Though he added it’s nice to get into the swing of “how-to-go-to-school” again.

Martin said the decision to come back to the U of M was a “no-brainer,” especially if coaching is something he’d like to do in the future. He starts his work at Minnesota following what he called “a good transition phase” after his retirement from the NHL in 2018 when he spent time figuring out what he wanted to do in the next chapter of his life. While examining his values, and ultimately how he could make a difference, Martin was led back to the University of Minnesota.

Gophers hockey head coach Bob Motzko was an assistant coach with the team when Martin was a player. He mentioned that Martin has a great demeanor about him that will be influential for the players.

Motzko also mentioned the rule that if an alum comes back to finish his degree, he could also get on the coaching staff. The Gophers welcomed Martin into the fold “with open arms,” Motzko said.

“How fortunate we’re going to have Paul to be around and use him as a sounding board,” Motzko said. “We are darn excited to have him.”

Martin has started working with the young defensive core on the Gophers this season. He said he enjoys working with student athletes, to try and get the most out of them. He wants to be able to give back, be a good role model and help the players any way he can.

“I was fortunate to make it because I had people that took me aside and taught me things and went the extra mile for me,” Martin said. 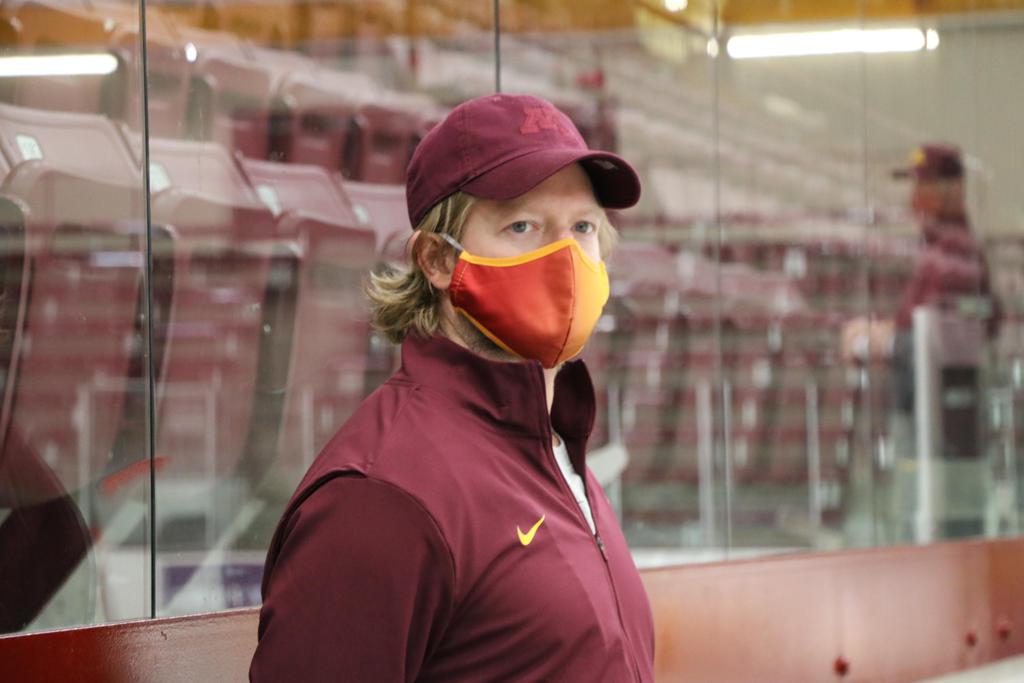 Martin won two national championships with the University of Minnesota.

As far as coaching in the future, Martin said he thinks it’s something he wants to do, but he’s not sure on what level or what capacity. His work as an undergraduate assistant with the Gophers will be a good measuring stick for him, Martin said.

Martin was a three-year letter winner with the Gophers, scoring 20 goals and 97 points in 127 career games. He helped lead the Gophers to three-straight NCAA tournaments, including the back-to-back national titles. His 97 career points rank 15th in Gophers history among defensemen.

The New Jersey Devils drafted Martin in the second round, 62nd overall in 2000. Martin spent six seasons with the Devils before moving on to play with Pittsburgh and San Jose for an NHL career spanning 870 regular-season games, 50 goals and 320 points. Impressively, he also played in the Stanley Cup Playoffs all 14 seasons prior to his retirement in 2018.

At the Olympics, the third time was the charm for Martin.

He referred to his first “big break” on the national hockey stage for Team USA at the 2004 World Cup of Hockey at Xcel Energy Center in St. Paul. The squad had a lot of defensemen hurt, so Martin got the call to play with teammates Brian Leetch, Chris Chelios, Brian Rafalski and Bill Guerin.

That led to Martin joining the team’s taxi squad for the 2006 Olympics in Torino, along with Minnesota native and long-time NHL player Matt Cullen, and Hal Gill. The team stayed healthy, so Martin didn’t get the call to play at that Olympics.

Martin was excited to be named to the team four years later in Vancouver, but he described those Olympics as “disappointing” because he broke his forearm that fall and wasn’t able to play.

His Olympic dream finally came to fruition when he played in the 2014 Sochi Olympics, taking fourth place with Team USA.

“Just what it means to put on that sweater, it was just an honor,” Martin said. “I was grateful to be able to finally play in the Olympics and stand on the blue line.”

Before Martin focused solely on playing hockey, he played a variety of sports growing up. Football was his favorite sport growing up, but he also played baseball and ran track. He even quit hockey in eighth grade to play basketball with his friends, Martin said.

“I just loved the changing of the seasons and playing different sports,” Martin said. “And I really think it aided in my development as an athlete. Whether it’s eye-hand coordination or toughness or teamwork, so many different things that other sports provide.”

But he missed hockey, and he played a lot growing up with a pond behind his house in Elk River. He decided to focus on hockey after his junior year in high school, saying that hockey “was always my sport.”

Thirty-nine-year-old Martin was living in the Los Angeles area of California the past nine months or so, but he said he’s always thought about returning home to settle in Minnesota.

The Gophers hockey program, and the University of Minnesota in general, have always had a special place in his heart, and Martin is hoping he can help provide the current student athletes with the same positive experience that he had.

“I think this is where I’m supposed to be with this opportunity,” Martin said. “This has always been home.”