UMass Boston hockey players Andy Walker and Jake Adkins look back at their 1,000-mile journey in support of cancer awareness

Now known as the Men in Blades for their epic inline journey spanning nearly 1,000-miles in support for cancer awareness, Andy Walker and Jacob Adkins have spent the past two months reflecting on the impact of their journey, both in their own lives and in the lives of those they’ve inspired along the way.

Originating as a way to stay active and in shape during the early months of quarantine, the UMass Boston hockey players took their new everyday activity of rollerblading to the next level.

“At the beginning of quarantine, we practically lived together since both our roommates left and we didn’t have that many friends who stayed in Boston. We wanted to stay active so we started playing roller hockey or just rollerblading and that turned into blading further and further,” Walker explained. “One day we tried going five miles and that’s when I looked at Jake and asked him how much money it would take to go all the way to L.A. We thought about it and ended up doing it for a cause bigger than ourselves.”

During the beginning stages of their planning, the Men in Blades built a partnership with the American Cancer Society in order to help raise awareness and donations for those affected by cancer, a cause which has hit home for both Adkins and Walker. 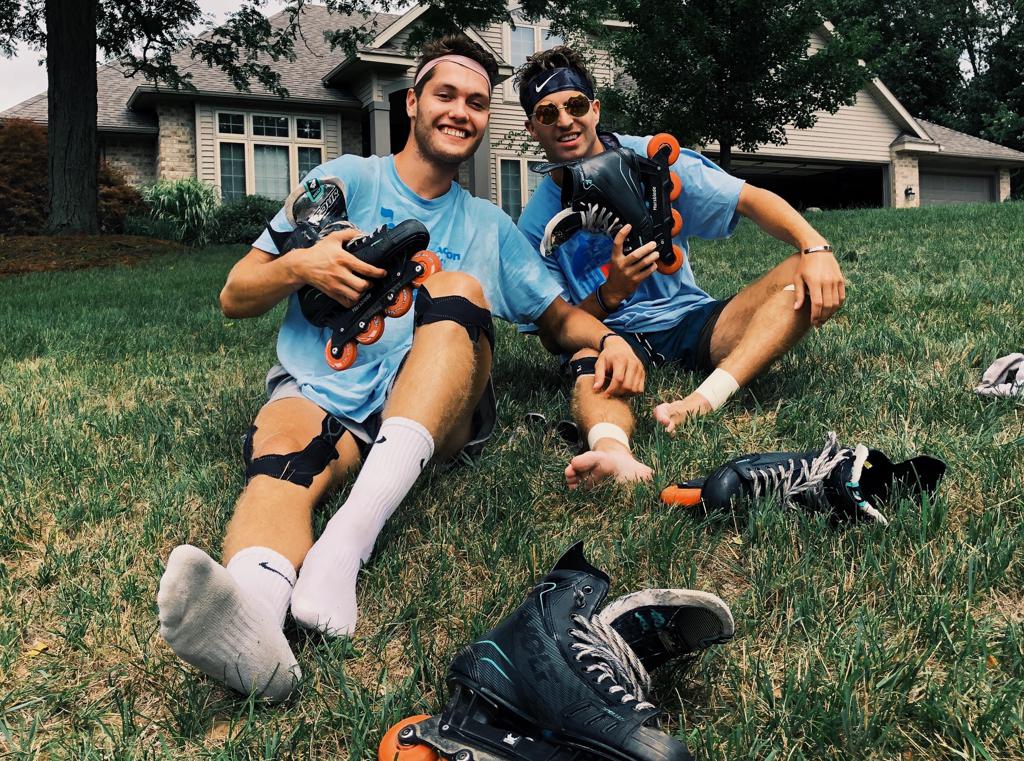 Jacob Adkins (left) and Andy Walker (right) pose for a quick photo after arriving at the finish line.

“Both of us being from families that have been affected by cancer, it’s something that we feel it’s the least we can do is give back and we’ve been fortunate enough to make it and have all these people supporting us,” Adkins expressed.

While both Walker and Adkins were in top physical shape prior to beginning their journey with years of hockey conditioning and training under their belts, the challenge of skating roughly 15 hours a day for ten-days straight pushes one’s physically abilities to a whole new level.

“The training process was basically all out of the gym, all on the pavement, hitting the blades,” Adkins said. “Every single day we would go a little further until we got into a regimen where we were doing twenty-miles one day, taking the next day off and then hitting twenty the next day. There were three weeks where one of the days we did about 50-miles and those were our longest days of training.”

As crucial as their physical training was to the adventure, mapping out the ten-day journey from UMass Boston’s campus to Walker’s hometown in Mason, Michigan to include rest stops, refueling breaks and a place to sleep every night took just as much effort from the two.

“I’d say we spent just as much time if not more planning the whole trip than actually training for it. It took days of calling people, every hotel, every convenience store within the surrounding area of our stops. There was so much that went into it behind the scenes that no one knew about, but finally seeing it go through and making it to the finish line made every one of those moments worth it,” Adkins explained.

It goes without saying, there are always unforeseen obstacles that you cannot plan for and for the Men in Blades that was a combination of elevation changes from state-to-state and the mental fatigue of the journey.

As the days went on, Adkins and Walker learned to adjust to the varying conditions thrown their way in order to forge on.

“We learned very quickly after day three to start using google maps and to not go by miles, but by elevation,” Walker said. “I think one day we went fifteen extra miles to avoid all the extra elevation and we didn’t train for that at all. Another aspect that I don’t know how we could have possibly trained for was the mental fatigue we dealt with.”

All along the way, knowing they were blading for a cause bigger than themselves continued to be their motivating factor. The Men in Blades felt support every step of the way from the crew that accompanied them on the journey to those at home following along.

Among the many who reached out, the Men in Blades were contacted by a mother of a youth hockey player in Colorado who has been battling cancer – Jack. Through Instagram, his mother sent messages and even a video that Jack recorded to encourage the guys along the way.

“I think that as the trip kept going on more people were reaching out to us, which was making us push that much harder, especially Jack, our new little man in blades. He definitely has a soft spot in all of our hearts and that’s something that was incredible to see,” Adkins said.

It’s the stories like this that push us every day to keep going! This is our new friend Jack, who was diagnosed with Acute Lymphoblastic Leukemia in Dec. 2018 & has been in treatment ever since! We wish him the best & welcome him as the newest member of the Men In Blades!

Daily they would wake to encouraging texts and calls from family, friends, and others who had heard about the journey and wanted to share how cancer has affected their own lives and how much what they were doing meant to them.

“It was absolutely incredible. We learned that very quickly when we’d cramp up or fall down, all you want to do is lay there. You think there is no recovering then you get ice on your back, a hydration drink poured down your throat and some food put in you,” Walker explained. “I don’t think we would have made it outside of Boston without everyone, on and off the road.”

Now back in Boston, in school and off the blades for some time, Adkins and Walker have used nearly two and half months since their trip ended to look back on the highs, the lows and all the exciting experiences this trip has given them.

“There were a lot of parts where we were both riding and we would look at each and be like wow this is actually kind of cool when you think about getting to see all the things we did,” Walker said. “I think we can both agree that the finish line was absolutely incredible, seeing everyone out there and being able to hug each other and know we made it. When you look back it’s really inspiring.”

One of the most powerful stops along the way for the Men in Blades was the Hope Lodge, which provides a free home away from home for cancer patients and their caregivers, in Cleveland, Ohio. Unfortunately, due to the pandemic, they were not allowed inside, but optimistically they hope to return and visit with patients in the future.

“It was amazing, but getting to see the Hope Lodge was eye opening even though we were in such a tough mental state,” Adkins said. “I wish we had the opportunity to go in and speak with cancer patients, share our insight and try to inspire them, but that’s just something we’re going to try and add on in the future and I think that’s going to be really awesome for us.” 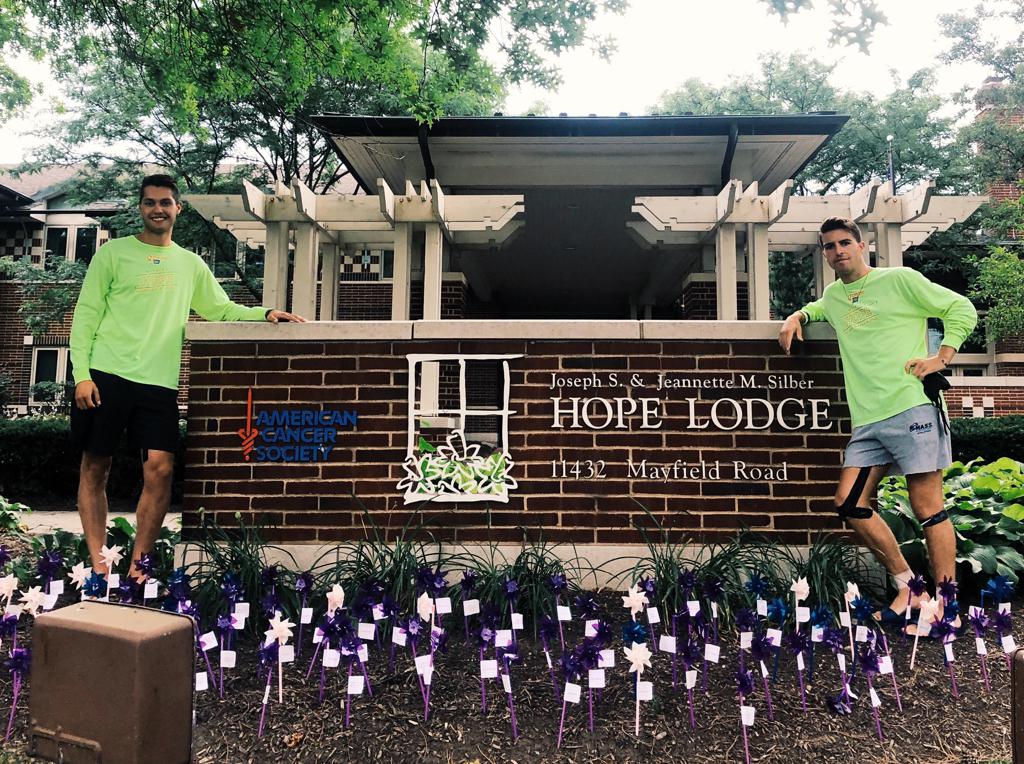 Although their journey has concluded, the Men in Blades continue to raise awareness and donations for ACS. Since July, they have stayed in contact with Theresa Freeman, the Director of Communications at ACS, in order to brainstorm future opportunities, including work with the Boston Bruins Hockey Fights Cancer initiative and the Boston Marathon.

“At this point, all I can say is that I am incredibly glad that I did it. Even though $30,000 isn’t the largest amount of money for an organization like ACS, it’s the impact that we had and the inspiration we created and I think that goes a really long way,” Adkins expressed.

Through everything, from the work with ACS, the support along the way and the media coverage that followed, one thing that’ll never fade from their journey is the bond formed between the two teammates, friends and now roommates.

“I can definitely tell you that I know he won’t ever quit on me or I won’t be able to quit on him. We’ll always have each other’s backs and I think we’ve made it through the toughest of times together as far as I’m concerned,” Walker expressed. “Obviously, there’s different levels of tough, whether it be physical and mental, but through those if we have each other’s back why not have it in any other situation.”