A longtime official and now 10U coach, Carnathan has some insight on bridging that gap

Paul Carnathan logged into a virtual coaching seminar this summer as a 10U coach. The former official with more than two decades of experience in the American Hockey League, ECHL and more was watching as USA Hockey staff and volunteers covered video clips with examples from the Declaration of Safety, Fair Play and Respect.

The videos, with examples of acceptable and unacceptable body checking and body contact, are utilized across the country as coaches attend virtual clinics for their respective coaching certifications. USA Hockey has emphasized its body checking and contact rules to change the culture in an effort to remove hits to the head, hits from behind and late hits within youth hockey.

Carnathan, an officiating volunteer as well as coach, watched as coaches attempted to make officiating calls while watching film in HD, sometimes with slow motion to help.

The consensus? There was never 100% agreement. That is, until the group was able to stop and effectively communicate with one another their thoughts and interpretations. That type of understanding and communication is something Carnathan knows is crucial for having a good hockey experience throughout the country.

“The biggest thing I would stress is just everybody realizing that officials are human beings, too,” Carnathan said. “I understand that people get frustrated and yell at the sweater, but that’s somebody’s son or daughter you’re yelling at. Communication is a two-way street between coaches and officials. We’re all in this together, we’re all human beings, we’re going to do what we need to do to make sure the game is safe, and if we all approach it that way, people will compete and have fun and the game will be better for it.”

Carnathan enjoyed an illustrious career as an official that spanned the entire globe. His greatest officiating memory came during the 2015 IIHF World Championship in Prague, Czech Republic, when a Sidney Crosby-led Team Canada defeated Alex Ovechkin and Team Russia in the gold medal game. 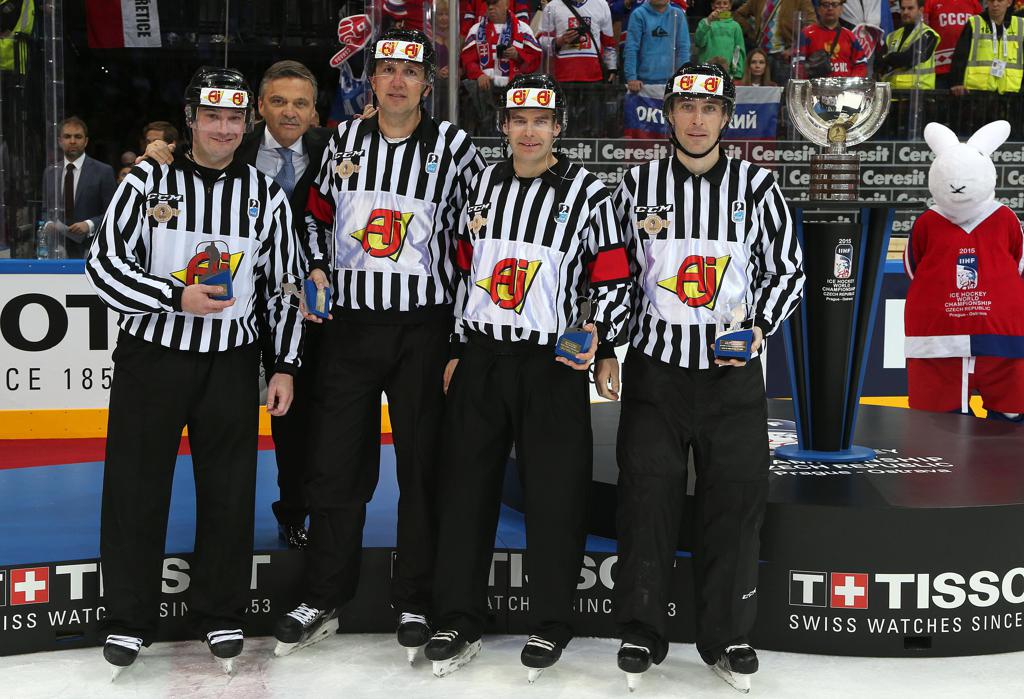 The current youth hockey has certainly witnessed change throughout hockey during his two-decade career as an official. The rough-and-tumble playing style previously prevalent in the game is primarily gone, and the focus is on speed and skill.

“I try to help and give back to USA Hockey any way that I can, instructing national camps and symposiums, and helping with officiating development programs,” Carnathan said.

Carnathan, the state supervisor of officials in Georgia, is also currently focused on coaching his 9-year-old son Max and his squirt travel team. Carnathan believes it’s critical for referees and coaches to stand united.

“USA Hockey has done a really good job of trying to get everybody on the same page, and I think that’s critical,” Carnathan said. “Being a coach, and an official, I can tell you that if you’re not communicating both ways, you’re never going to be aligned. If you don’t have open lines of communication, and you aren’t seeing each other from the same place of understanding, you’re never going to agree.”

The only way for total buy-in, Carnathan said, is to have hockey directors for each association buy into what USA Hockey rolls out from a national perspective.

“If the messaging is the same to the referees, as it is to the coaches, but it’s not being adopted by a hockey director, or accepted within a hockey association, then it’s never going to work,” Carnathan said. “Where I’ve seen the most success is when you have a hockey director tell their coaches, hey listen, abuse toward officials from parents and coaches isn’t going to be tolerated.

“If the directive doesn’t come from the top, it’s not going to take hold. If we’re not aligned, if we’re not communicating the same expectations, we’re going to get stuck in an age that paints hockey in a bad light, and that’s not what anybody wants.”

Carnathan informs his players and parents that it’s his job as a coach to communicate with officials during games. He said that roughly 9,000 officials enter through USA Hockey each year and statistically half do not register the following season.

“I never got better as an official because somebody yelled at me,” Carnathan said. “My game never got to the next level because somebody was on my case. Oftentimes, especially at the younger level, we have newer officials, and the only way we’re going to get better officiating is if those guys aren’t being harassed every time they take the ice.”

The most rewarding part for Carnathan is the opportunity to help coach officials as they come up through the ranks.

“And certainly, when I was in their shoes, there were numerous people along the way that helped with my officiating career,” Carnathan said. “You have to help those people out. Everybody needs a push, and it makes you feel great to see somebody progress to a higher level.”