Kalamazoo Among Many Michigan Associations Excited to Have Hockey Back

Maybe having its rinks open up a little later than most states will be a blessing for Michigan. The Kalamazoo Optimist Hockey Association sure hopes so.

The association had its skaters back on the ice on Sept. 12 for the first time in 26 weeks since the coronavirus pandemic started. And, boy, everyone was prepared and excited.

“It was awesome,” KOHA’s marketing and communications director Stephanie Dukesherer said. “I will tell you from a club standpoint, we were so excited. Also, we were a little apprehensive what it was going to look like, how the families were going to react, how the skaters were going to be on the ice with masks and what the flow of the weekend was going to be. We could not have written a more perfect weekend if we had tried.” 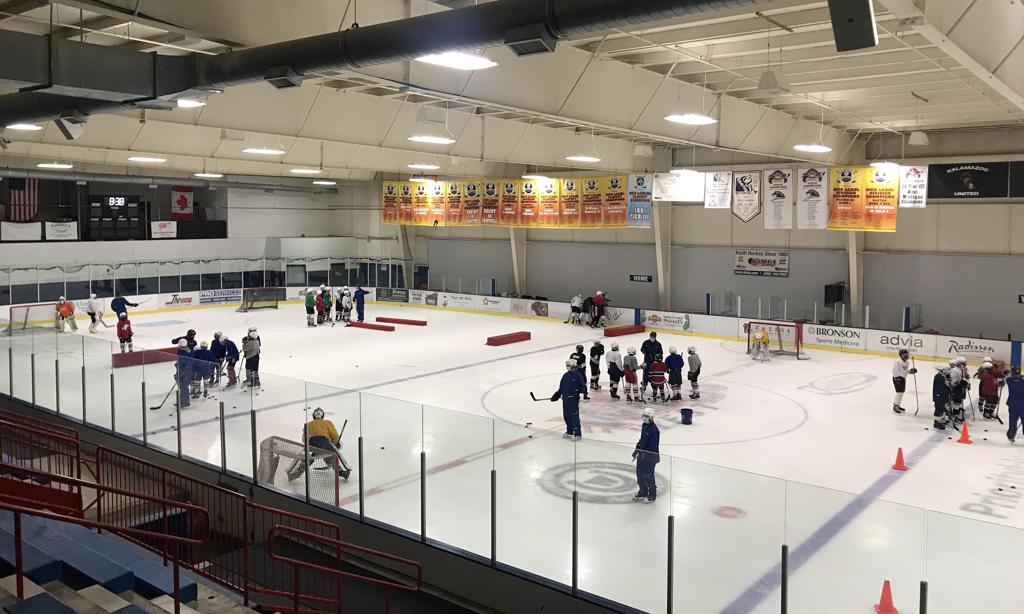 “It was a lot of fun,” said fourth-year KOHA hockey director Matt Kakabeeke. “Probably the biggest thing for us is trying to figure out what the new normal feels like. It took us two or three sessions to really figure out how to navigate.”

The volunteers and staff within KOHA had a pretty good idea how to approach everything, from making sure players and parents have their masks on 100% of the time to how to have everyone exit the building in a safe and efficient manner.

It helped that the organization was able to hear what other organizations around the country had done during reopening — things that worked and things that could be avoided. Kakabeeke was able to receive advice from USA Hockey American Development Model regional manager Joe Bonnett and other hockey directors.

“I’m actually on a monthly Zoom call with Joe Bonnett and his West Coast clubs, so like the guys in Dallas and the guys out in Seattle and Vegas and California and Arizona,” Kakabeeke said. “The last couple months, it was, ‘What do you have to add? Nothing. We’re still not open.’ But they were sharing their experiences and it was a great exchange, so I kind of knew what to expect and that group is great for sharing that information. For us here in Michigan, it was really helpful. It gave me some things to think about and to bring back to our own club and actually back to MAHA [Michigan Amateur Hockey Association], to our affiliate level.” 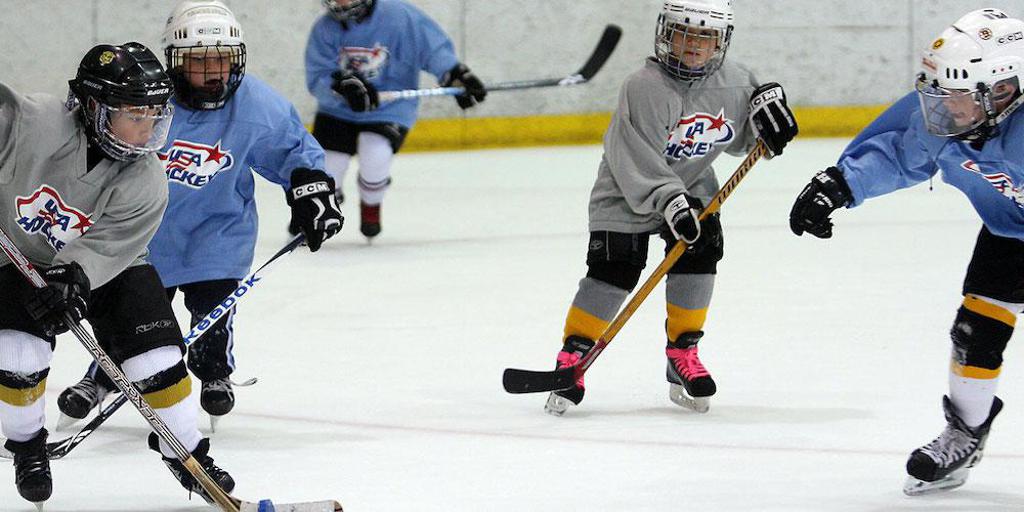 Learn More About The ADM

The safety measures that KOHA — which skates out of Wings West in Kalamazoo — put in place worked well on opening weekend.

The biggest safety measure, of course, was having players wear masks on the ice. Dukesherer said some players seemed a little more winded with masks on, but that could have been from skaters not being in the best condition after six months away from the rink.

“There were plenty of kids that did just fine with the mask on,” Dukesherer said. “Did they like it? No. I haven’t met anybody yet that says, ‘Man, wearing masks is really cool. It feels really good.’”

Dukesherer noted that the kids who wore gaiters had more difficulty than those wearing regular masks. Even the disposable blue medical masks worked well and kept out moisture.

Wearing a mask on ice was also trial and error for the instructors.

“From a coaching standpoint, how are you blowing the whistle and how you’re interacting and instructing with the kids,” Kakabeeke said. “For the kids, figuring out what works and what doesn’t work.”

Only one parent per player was allowed in the rink and that person had to socially distance in the stands.

“We asked them to arrive in their gear and no sooner than 15 minutes prior to their ice time,” said Dukesherer, who has a son skating for the association. “But we did use locker rooms. We used four locker rooms per session instead of two, so we distanced in the locker room. We disinfected the locker rooms, sprayed them down, between each session.”

Players and parents were asked to leave the building 10 minutes after their ice time concluded and no hockey bags were allowed to be left in the lobby at any time. The rink also had touchless hand sanitizing stations installed and touchless water stations to fill water bottles. 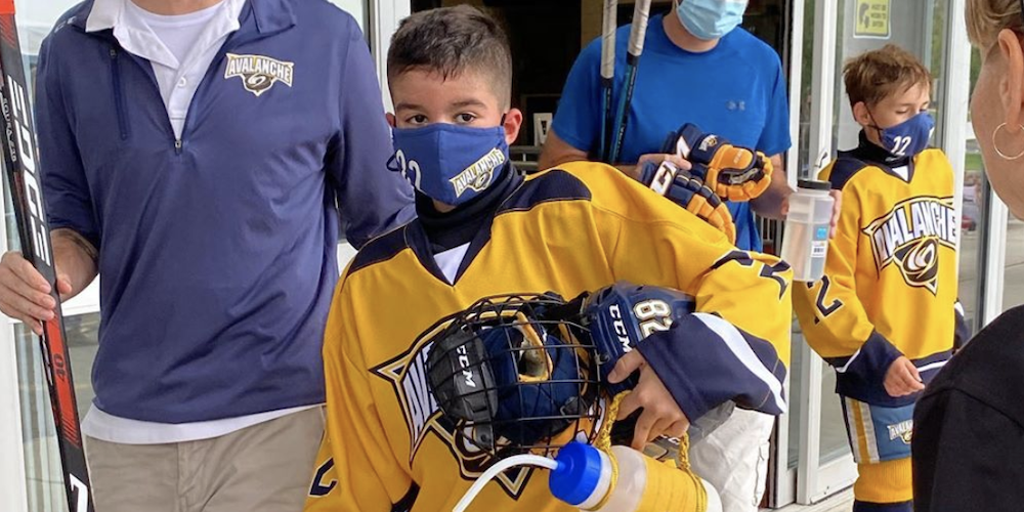 Off and Running for Practices

KOHA had all of its levels — 6U, 8U, 10U, 12U, 14U, 16U, high school and goalies from all ages — practice the first two days. Every level had two-a-day skates except for the two youngest age groups.

It took a little time to kick the rust off the skates, but that was to be expected.

“By that fourth session, kids were flying,” Kakabeeke said. “They were feeling comfortable. Obviously, a handful of them had grown quite a bit and were dealing with new equipment, new skates.”

Kakabeeke said the best part about the players being back on the ice was getting them some exercise and letting them see their friends again — some for the first time in over six months.

KOHA usually holds its tryouts every season in May, but because of the pandemic, that was all pushed back to the week of Sept. 21.

For all age groups through KOHA, season schedules haven’t been worked out yet. But as hockey continues to progress throughout the state of Michigan, volunteers and families alike know that the season schedules are right around the corner.

“It’s been a little bit of a challenge,” Dukesherer said. “We’re just getting our ice blocks from the rink now to make our season schedule. And the leagues that our Tier II and Tier III teams are in, their scheduling meetings are coming up. It’s kind of in limbo, but everybody’s been great.”

Since KOHA is an ADM Model Club, those in the organization and its coaches believe in skill development as the best means for a player to improve. Without games scheduled at this point, practices will hold extra importance.

“I tell our families all the time, ‘If you want a competition-based club, you came to the wrong club. We’re a development-based club,’” Kakabeeke said. “We believe that it’s a process. If we could do more practices than games this year and avoid driving back and forth to Detroit, for the most part, I think most of our families would be happy with that.”