Montoya believes if young Hispanic players get to try hockey, they’ll fall in love just as he did

Al Montoya, the first Cuban American to play in the NHL, says he was also the first native Spanish speaker in the 100-year history of the league.

Montoya finds both facts amazing, but also believes members of the Hispanic community would fall in love with the game as he did while growing up in Chicago. That is as long as they’re given the opportunity to try the sport.

“I realized the weight of what being the first Cuban American was the day I got drafted,” Montoya said. “You’re not representing yourself anymore. You’re representing the community. And I embraced it.”

He spent 15 years in professional hockey as a goaltender, but it’s also his family history that results in Montoya speaking with such pride.

Montoya’s mother was born and raised in Cuba. His grandparents fled Cuba and from the Castro regime in 1963 for the United States. They went from being landowners in Cuba to Montoya’s grandfather “selling strawberries on the side of the road and working at McDonald’s,” Montoya shared.

It’s the work ethic from his grandparents, and his mother working as a doctor, that has rubbed off on Montoya, now 35 years old. He recalls his grandfather telling him how grateful he was for the United States, the place that gave him his freedom.

“One of the prouder moments of my life is standing on that blue line or that red line, looking up at our flag and knowing the sacrifices that they made to give me that opportunity of freedom,” Montoya said. “They passed it down to me. I can’t say enough about it.”

Raised by his single mother and his grandparents along with three brothers, Montoya followed his older brother in playing hockey. Montoya started out as a skater, taking up hockey at 3 years old. He began hockey as a forward, but the next year, his team didn’t have a goalie. He remembers playing in a house league before that, where the goaltender bag cycled between teammates, allowing everyone a shot to try the position.

That second year of mites, “I took that bag, and I never gave it back,” Montoya said.

He eventually ended up with the USA Hockey National Team Development Program at 16 years old. In 2004, he was part of the U.S. National Junior Team that went undefeated (6-0-0) to win the first-ever International Ice Hockey Federation World Junior Championship gold medal for the United States. Montoya was named Best Goaltender and named to the All-Star Team.

He called that 2004 team, which included Zach Parise and Ryan Suter, “one of the best teams ever produced by USA Hockey.” 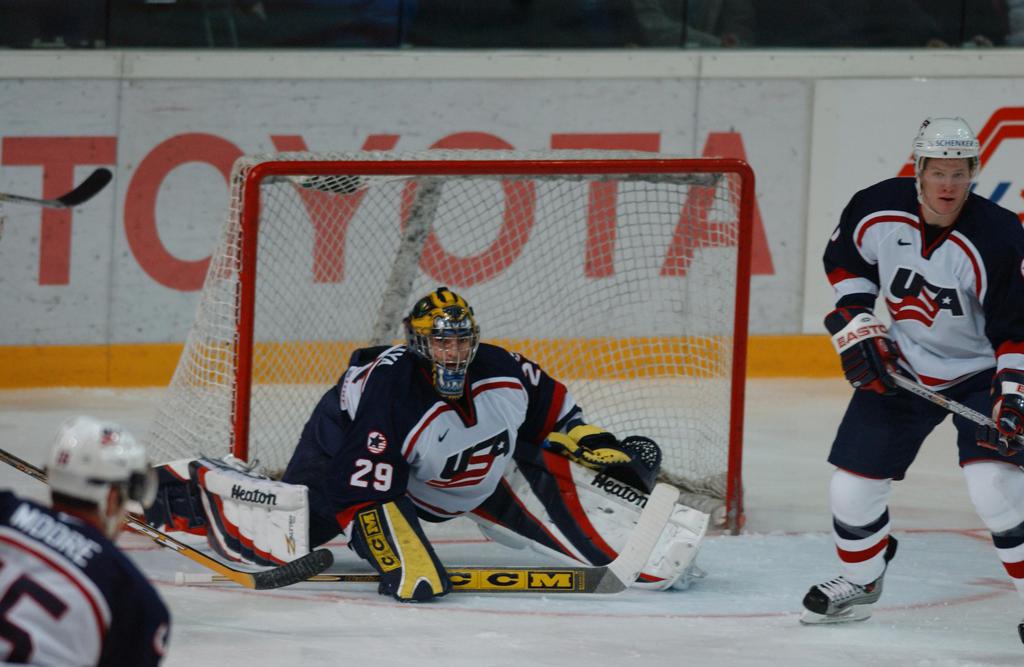 “This is our chance to make this statement and be the first team to ever win, the first U.S. team to win a gold medal,” Montoya said. “Once that American flag is going up, and you know you won it, and you’re surrounded by your brothers, your family, your teammates. It’s really a moment I’ll never forget.”

He played for the University of Michigan when he was 17 years old and went 86-29-8 there across three seasons. The New York Rangers drafted him sixth overall in 2004. That’s when he realized the platform he had as the first Cuban American NHL player. He also played in Puerto Rico, gave interviews in Spanish (his first language growing up) and even had a sandwich named after him at the Carnegie Deli.

He made his NHL debut April 1, 2009 with the Phoenix Coyotes, coached at the time by Wayne Gretzky. Montoya earned a 23-save shutout in a 3-0 victory over Colorado at the Pepsi Center. He couldn’t have scripted it any better.

“Getting that chance to live that ultimate dream that first game is a moment that will always be close to my heart,” Montoya said. 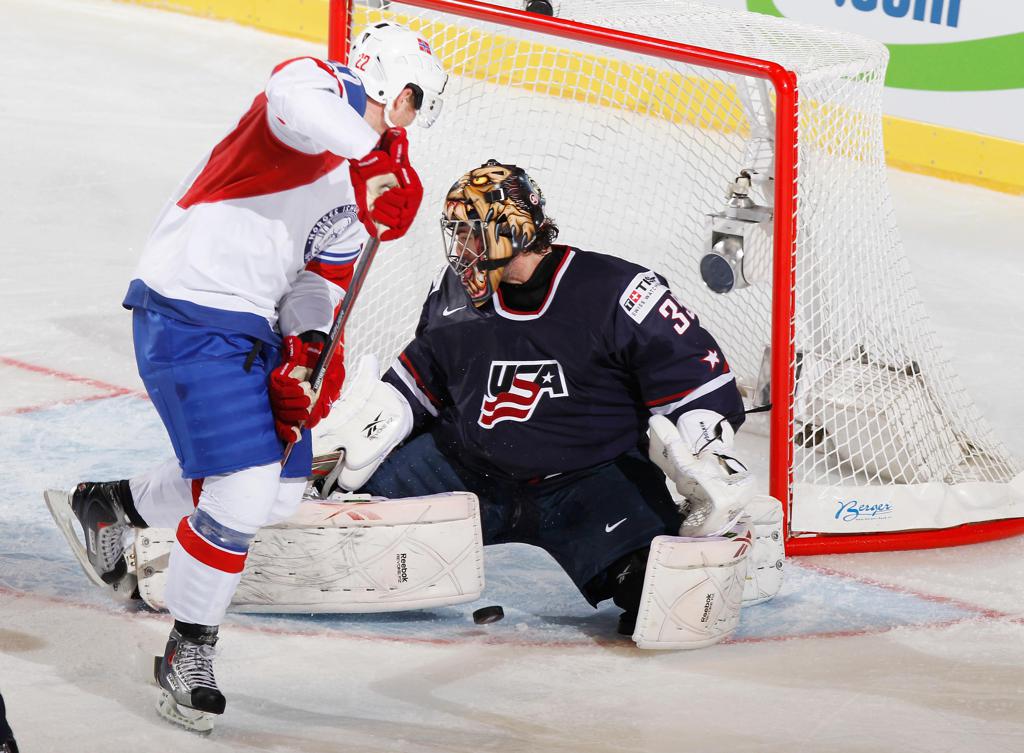 Montoya at the 2011 IIHF Men's World Championships (Images on Ice)

His grandparents died in 2008 and didn’t get a chance to see him play in the NHL, but they watched him at the University of Michigan and saw him get drafted.

“They got to watch me play which was, now that I think about it, it makes my heart whole,” Montoya said.

A year into retirement from hockey, Montoya spent time with his family and took “a spiritual, emotional trip” to Cuba last summer. He was the first in his family to return since 1963. Montoya has appreciated this time in retirement.

“It’s given me the time to be intentional about the next phase of my life, and that’s dedicating my second career to my passions, which are hockey and the Hispanic community,” Montoya said.

His goal is to grow hockey by incorporating Latinos into the conversation around the sport. Recently, he was a panelist for USA Hockey’s Let’s Grow Forward webinar. This focused on different ways the Hispanic community is already joining the larger hockey family and, even more importantly, discussed ways to get them further involved. During the webinar, Montoya and fellow panelist, Robert Torres, talked about their work together. Montoya has partnered with Torres’ organization Parents for Peace and Justice, a Hispanic community in Montoya’s Chicago hometown. Montoya is also part of the NHL’s Player Inclusion Committee.

Montoya sees a grassroots effort taking shape, bringing hockey to Hispanic communities that maybe cannot afford to play hockey or don’t immediately gravitate toward the sport. Hockey isn’t the first sport Hispanics reach out to, Montoya added. In Cuba, there was no ice; kids play baseball or box, he said.

Still, he believes with the celebratory nature of Hispanic culture and how everyone loves to come together that there’s no reason that Hispanics shouldn’t be passionate about hockey as well, he said.

“I know they love speed, I know they love action,” Montoya said. “And by doing that and by starting at the grassroots level, you’ll check all the boxes at the end of the day with fan inclusion and marketing players. The game will continue to grow.”

He’s making it a goal to get out and interact with youth, so he can get them involved in hockey at more of a grassroots level. Or maybe his role will also be working at the NHL level to help put fans in the seats. He’d love for the “fantastic” game of hockey and the “fantastic” Hispanic community to be blended together.

Montoya’s outreach is local with the Hispanic community, but he’s also had conversations with NHL general managers and presidents. It’s all about finding a home for his vision and getting to work right away.

“It started out as an idea, and I’ve had a year to grow this thing and grow this thing,” Montoya said. “I’m looking forward to finally putting it all together.” 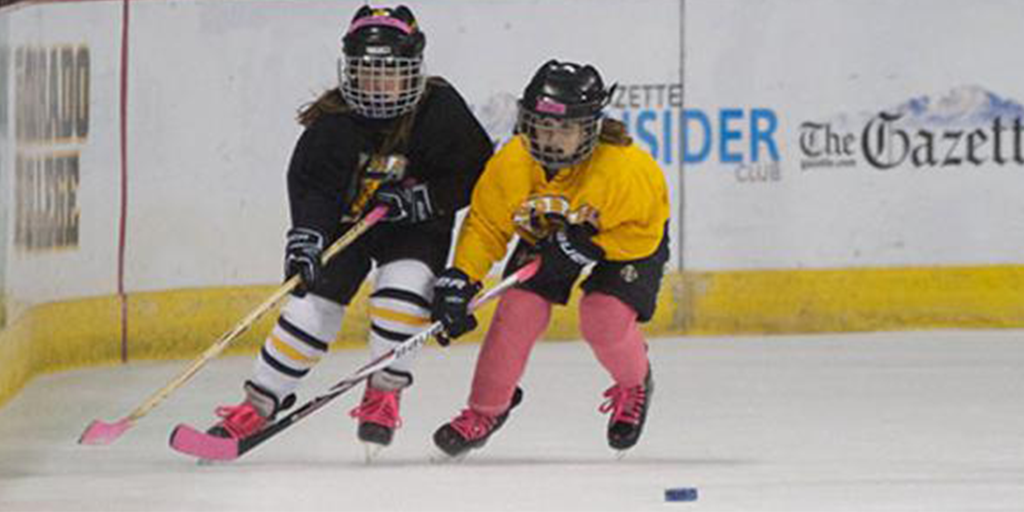