Calling games remotely is a different challenge, but Mleczko feels the same excitement for playoff hockey

The National Hockey League’s return to complete the 2019-20 season has brought A.J. Mleczko back with it.

Teams are still pursuing the Stanley Cup and Mleczko is still doing much of the same broadcasting work, but as the world works its way through the COVID-19 pandemic, the settings and processes are drastically different.

Mleczko, an Olympic gold medalist with the U.S. Olympic Women’s Hockey Team in 1998 and a silver medalist in 2002, is operating from bubbles outside the bubbles.

While showing the adaptability necessary to perform a job in these times, Mleczko is also displaying the versatility that was once evident when she was on the ice. After playing forward in her first Olympic appearance in Nagano, Mleczko was on defense in Salt Lake City.

Mleczko is working as both an in-game color commentator and a studio analyst for NBC, which includes NBCSN and NBC Sports Boston, part of the NBC Sports Regional Network.

Along with that, Mleczko is working as a studio analyst with the Madison Square Garden Network for broadcasts specific to the New York Islanders.

The latest assignment has come with adjustments for Mleczko, who is spending more extended time than usual away from her husband, four children (ages 8 to 16) and her suburban Boston home.

Mleczko is living out of a hotel while commuting between NBC’s headquarters in Stamford, Connecticut, and MSG’s location in Manhattan.

After calling an overtime, series-deciding game Tuesday when the Tampa Bay Lightning knocked out the Columbus Blue Jackets, Mleczko took time out from preparation for her next game to discuss her assignments during a unique Stanley Cup process.

USAHockey.com: What does it feel like to be working games again after the long break?

It’s different. There’s no question that this is a challenge in a lot of different ways. But, I’ve been impressed with the how the league, how the NHLPA and all the networks have managed to pull this off.

USAH: What did you miss most about hockey before it returned?

AJM: I think I missed the excitement of live competition and hockey’s my favorite. I missed live sports in general, just having something to watch on TV as entertainment and to keep track of. Especially with the timing of the quarantine, for me particularly as a hockey fan, when it was supposed to be Stanley Cup Playoff time, it felt like there was really something was missing.

Obviously, during quarantine, there was a lot was missing from our lives. For me, specifically, I travel for my job. I travel for this work, usually extensively during the beginning part of the Stanley Cup Playoffs. I was home with my children and home with my husband. I tried to appreciate and relish that time at home with my gang. But, at the same time, I was understanding there’s a reason we love sports. There’s a reason fans are out there cheering their team or watching a game.

USAH: Can you describe, now that you’re back to work, what the setup has been during the broadcasts and also explain a little about going to two different locations? What is it like when you get there in terms of co-workers that you are able to interact with and how you are handling that as well as monitors and how you are watching the games?

AJM: It’s a unique situation based on being in a global pandemic. Most people who are back to work are facing different challenges. Being in the studio, there’s a lot less people there. I’m used to being on-site, whether I’m working for MSG or doing a game for NBC, I’m usually in an arena, down by the glass between the team benches or up in the booth.

It’s really different being in the studio in Stamford or when I drive into Manhattan to be in the MSG studios and work there. Most of these places don’t have everybody working, so there’s just less people for obvious reasons. Getting in and out of the buildings, you have to wear masks and take your temperature, and you have to fill out a daily wellness check. Everybody is very respectful of it. The buildings have arrows telling you which directions you can walk in going through the building. For those of us on camera, it’s a little more challenging because you take your mask off to go on camera, you have to make sure you are six feet away from your co-worker. At NBC Studios in Stamford, they have a make-up team there. They do hair and make-up and they have to put a mask on, so I feel bad for those make-up artists who are working so hard to make me TV ready.

To answer the question about calling off a monitor, there’s no question that it’s challenging. I’m beholden to the camera operators and the directors who are on site. Whatever the camera operators and the directors in the truck deem appropriate for the screen is what I have to look at. All of us as analysts have our different styles. I like to look at different things. When I can just see the play or just see the puck, then I can’t see off the play — where is this player going? How are they covering that player? It’s much more challenging. After the fact, I can ask for a different angle. I can look at the up-high angle, for example, and see the whole ice, but in the moment, my analysis has to be split-second when I’m calling a goal and how that goal happened. My job is the why and the how and that’s challenging when you didn’t necessarily see how it developed because it was off a screen.

On-site, I can use my own eyes and choose what to look at. I did a game a couple days ago where Kenny Albert was in Edmonton, up high in the booth; Pierre McGuire was down low next to the benches and I was in Stamford. So, none of us are next to each other. You’re trying to read the cadence. There are two analysts in that situation. You’re trying to wait for a pause in the action to jump in. Those are the challenges, but, at the same time it’s live TV, we have a great crew here at NBC; we have a great crew at MSG. Everybody does their best. 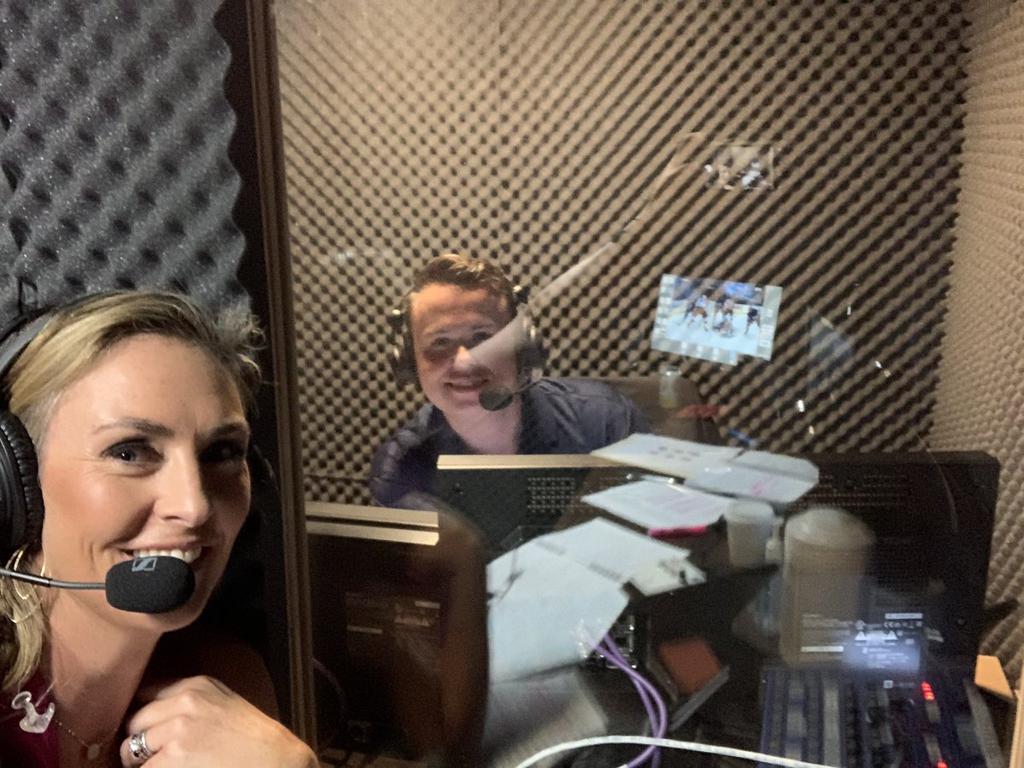 AJM: I just called an overtime game when Tampa Bay knocked out Columbus. Of course, after their five-overtime game in Game 1, you just never know when it’s going to end.

I love free hockey. I love the intensity of it, the thrill of it. I did not work the five-overtime game, but I loved watching it. You go in expecting three periods and you wound up getting eight in that game.

As an analyst, it’s a little bit hard. The one today, in an elimination game, you want to break down the goal as a hockey person and an analyst. At the same time, it’s a huge moment.

The Columbus Blue Jackets had a run here that no one expected. They didn’t give up. They were resilient. They were fun to watch and their season ended on that goal. It was a defensive-zone breakdown, and do I really want to go through all that when the Tampa Bay Lightning are moving on and that’s exciting and the Columbus Blue Jackets have to leave the bubble and their season’s over.

Sometimes it gets bigger than breaking down the X’s and O’s and the actual analysis of a goal. I can go through it a little bit, but it’s always balancing all of that stuff. What is interesting to the viewers? And, everybody has a different viewpoint, too.

All I can do is think: If I’m a viewer sitting at home, what would I want?

USAH: As you’re thinking about the viewers, things were different this year when it started off with the round-robin and the qualifying rounds. What was it like working those games, with such a unique setup compared to past years, did you find yourself feeling like you had to explain more often what exactly a game meant?

AJM: I feel like I explained it a lot, but I heard from a couple different people, friends and others who were at home watching, that didn’t understand. It was confusing. It went from a traditional 16-team playoff format to 24 teams with a round-robin and a qualifying round and who plays who.

There was a lot that went into it. Again, I tip my cap to the NHL and the NHL Players Association that they came to this conclusion and this solution, which I think is amazing. But, it was more complicated than viewers are used to.

You can’t constantly explain it because that can be exhausting if you have to watch it constantly and the guys in the studio are already saying it. But nobody watches every minute of every game, so you have to say it more often.

We were living it. Every day, I was here watching games, reading about games. You can forget that some people that maybe aren’t watching as much, turn on a game at noon and may need to have it explained to them. It’s a constant balance.

USAH: How about game preparation? Normally, you would be flowing right from the end of a regular season into the playoffs. Did this factor into your own analysis and research in what you thought about the players coming into games off a long break?

AJM: I started by going back through all the regular-season stuff, but the second the games started, I realized that this feels like a new season.

I know they are starting where everything ended on March 11, but that was so long ago. So many teams had key players that were injured and going to be out for the playoffs that are now back. Or, you look at how certain players are going to rebound from the break.

Another thing I realized from the break is that a lot of younger players benefitted greatly from it. Part of it, I think the mental grind of an 82-game season is hard to get used to in the NHL. The older guys are used to it. They understand how to take care of their bodies. They understand the ebbs and flows of it. They understand when they need to take a mental break or a physical break. The younger guys are just getting used to it. For them to get a break, go home and spend some time with their families, maybe spend some more time in the weight room, it was really helpful to them. Those were the storylines that we went into that surprised me.

That was what was interesting in the first round. We’re all coming out of this quarantine and so are the players. How are they going to handle it?

USAH: We discussed what you missed the most about hockey. Is there a favorite part about being back? Is there something about this experience that you are enjoying most?

AJM: This has been a very different experience. I love playoff hockey when I get to go to different cities and arenas and see the crowds and the intensity and the thrill of a Stanley Cup run.

It’s great to see in these guys that there is no intensity lost in them. That was a big question mark. Is it going to have the same feel of a playoff run with no bodies in the stands?

It looks the same, in my eyes, as any playoff run I’ve seen.

I just enjoy having the intensity of playoff hockey back.