The men’s hockey program at the University of Alabama-Huntsville, which can trace its history back more than four decades, has again earned a reprieve.

Partly due to the effects of COVID-19 on university finances, UAH announced in May that it would be dropping hockey as a varsity sport. Less than a week later more than $750,000 was raised in private contributions, including $539,280 from a GoFundMe fundraiser, plus almost $35,000 from supportive t-shirt sales, to allow the Chargers to play the 2020-21 NCAA campaign.

Now the real work begins, making sure Huntsville stays the self-proclaimed “Hockey Capital of the South.”

“The Chargers have been around for 41 years,” said former UAH forward and Huntsville native Jared Ross, who played in the NHL with the Philadelphia Flyers. “There’s a lot of history and rich tradition, and long term-success. The last 10 years have been a bit of struggle, but it’s unique to Huntsville, and something not many southern cities can offer.”

The UAH hockey program got its start in 1979, winning three national club championships, and played briefly in the NAIA before joining the NCAA Division II ranks and then Division I as an independent. The Chargers later returned to Division II, won NCAA titles at that level in 1996 and 1998, and then re-joined Division I as a part of College Hockey America. As a CHA member, UAH made two NCAA tournament appearances, the second one backstopped by current NHL goaltender Cam Talbot.

UAH nearly dropped its hockey program eight years ago, before substantial financial pledges were made to keep it going before the Chargers joined the WCHA. Once again alumni, professional players, and hockey fans from around the world pitched in to spread the word, including Chicago Blackhawks forward Patrick Kane.

“The school tried to keep it quiet,” said Ross, whose father, Doug, coached the Chargers for 22 years and won 376 games. “It surprised a lot of people.”

Alumni put forward their plans to save the program, and the university gave supporters just under a week to raise at least a half-million dollars to keep the Chargers going—which they did, with two former UAH players contributing $125,000 apiece to the cause.

“There’s a lot of support, and not just from the alumni,” said Ross. “There’s tons of support from the community, who go to games or are impacted by UAH. I’m confident it will be a successful program, based on the support we received.”

Along with the dollars that were collected in the fundraising drive, a committee is also being assembled that includes hockey individuals, alumni, and successful business owners to assist the Chargers in attaining long-term viability on and off the ice.

“They’ll make sure to make the right decisions for the program,” said Ross.

Ross himself got his start at age 5, playing in the former Huntsville Youth Hockey Association. He stayed into his teens before going off to Michigan, prior to returning home to play for UAH. Another local product is current NHL forward Nic Dowd, who played collegiately at St. Cloud State.

Besides hockey, UAH is also known for its strong engineering curriculum. “The Rocket City,” as Huntsville is referred to for its long-standing ties to the aeronautics industry and the space program, has also benefited from former Chargers players who have chosen to make their permanent homes in Alabama. 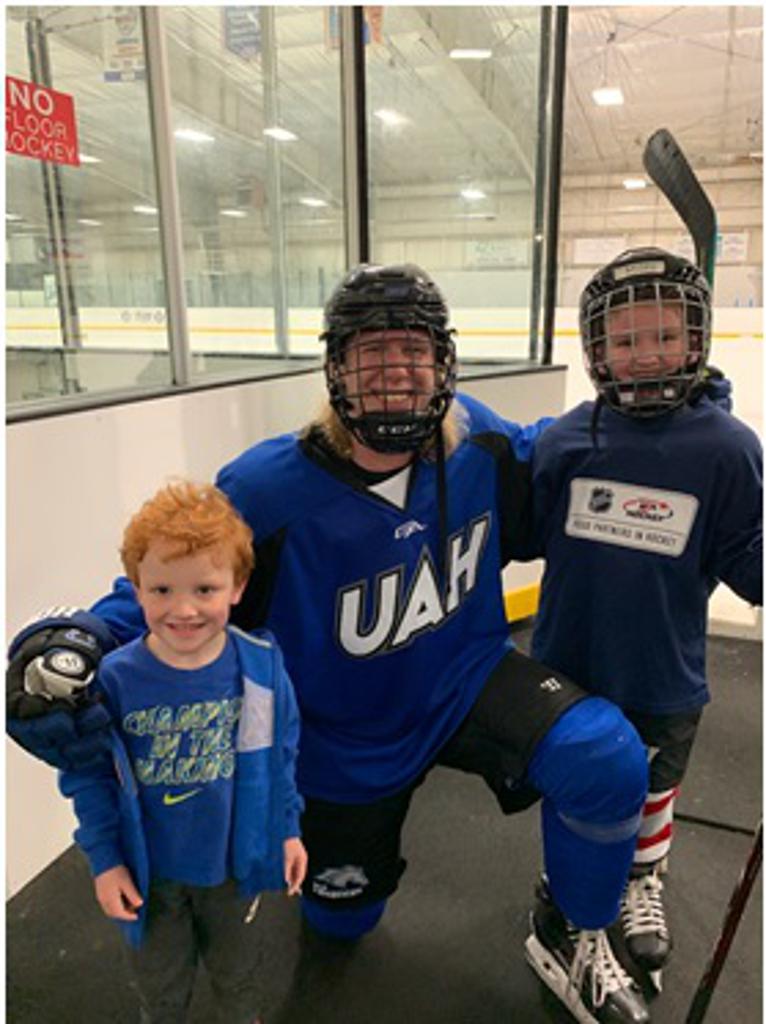 Those alumni are now involved with the Department of Defense, NASA, or various support agencies. A number of alums are also invested in real estate, while some give back to UAH and hockey by coaching future generations of players.

The local youth organization is now known as the North Alabama Hockey Association. It includes nearby Decatur, along with Huntsville, according to Ralph Drensek, who was the association’s president when the name change was made seven years ago.

A former UAH hockey forward himself, Drensek also knows firsthand the impact the Chargers have had on Huntsville.

“They’re a huge influence on youth hockey,” he said of his alma mater. “We’ve grown to over 1,000 USA Hockey players now.”

That includes over 40 UAH alumni coaching or otherwise involved in Huntsville-area youth hockey, out of more than 100 hockey alumni still living in the area.

“It’s a pretty substantial number,” said Drensek. “We have pretty knowledgeable people in a non-traditional market.”

The number of local players has also grown, from just over 700 participants in 2004 to more than 1,300 now, including over 300 adult skaters, all of whom are registered with USA Hockey.

“That’s a piece that we insisted on, as an association,” he said.

He also related that youth hockey makes a sizable impact on the local economy. He estimated that over $8 million had been spent in Huntsville over a recent five-year period, thanks to the perpetual hosting of youth tournaments and travel hockey weekends that fill up local hotels and restaurants.

“It’s a huge benefit to the community,” said Drensek, who added that visiting travel teams provide another boon to UAH itself. “We introduce potential students every time we bring people into town.”

He called having UAH alumni serving as NAHA travel coaches a “critical piece” in the local coaching pipeline. Current Chargers players also serve as role models for their younger counterparts.

A Detroit native, Drensek recalled playing any number of teams just across town while growing up in Michigan’s largest city. By comparison, Huntsville has only the one set of travel teams in NAHA, as compared to two organizations in Nashville, three in Memphis, and four in Atlanta, among other Southern metropolises.

NAHA itself skates out of the Wilcoxon Municipal Ice Complex, which has been undergoing an $11 million overhaul that has left Huntsville players without ice since mid-March, save for a 50 x 100-foot temporary sheet used for camps and clinics.

“It’s going well,” said Drensek of the arena upgrade, “but we could use more ice.”

The organization made a substantial contribution to the recent fundraising effort to save UAH Hockey, although Drensek declined to say exactly how much. He also said the association would love to partner with UAH, and buy every hour of ice the university could sell it in a mutually-supportive agreement. As it is, NAHA already utilizes the Chargers’ nickname, plus their blue-white-black color scheme. They also obtained permission to adopt UAH’s jersey style, which Drensek said was well-received.

Drensek is also involved in helping UAH locate a new conference home after the WCHA gets whittled down next year, which he called “a big hurdle.” He and others want to see UAH Hockey not only succeed but sustain itself in the long run, which could result in increased growth of the sport down south.

“It can only benefit youth hockey, with more ice, more role models, and better opportunities,” he said.