Dave Andrews has played a significant role in helping advance hockey in the United States.

Because of his efforts, Andrews, the longtime president and chief executive officer of the American Hockey League, has been named the recipient of USA Hockey’s Distinguished Achievement Award this year.

“I’m really humbled by it, and I was certainly shocked when I found out,” Andrews said. “I think this award is probably more of a reflection of the work that our league has done over the years, with the growth of our league into 27 cities in the United States and now in non-traditional areas. I think our teams, players and everyone involved with our league has played a role in the growth of the game in the United States.”

Created in 1991, the USA Hockey Distinguished Achievement Award is presented annually to a U.S. citizen who has made hockey his or her profession, and has made outstanding contributions, on or off the ice, to the sport in America. Previous winners include Phil Housley, Peter Karmanos, Brian Burke and Willie O’Ree, among others. 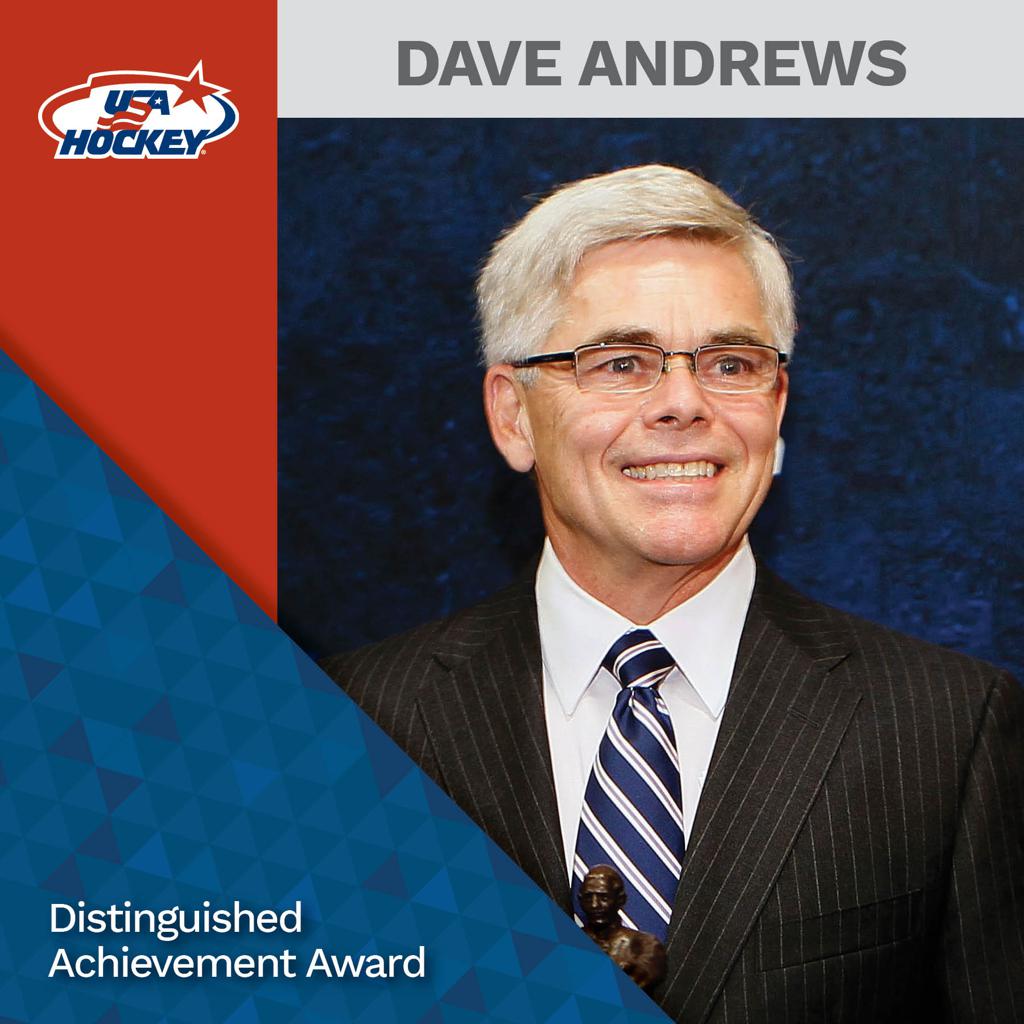 “When you look at people like that, who are legends in the game, and your name goes onto that list, it’s very humbling,” Andrews said. “A lot of those names are good friends of mine … certainly Willie and Brian Burke … there are a whole lot of them on the list who I’ve known very well and I’m honored to be on that list as well.”

Pat Kelleher, executive director of USA Hockey, said that Andrews has played an important role in hockey throughout the past 25-plus years.

“He’s a different kind of big name, but he’s every bit as deserving,” Kelleher said. “The American Hockey League is an institution that has only gotten stronger with Dave’s leadership. He’s done it so well for so long. I’m very happy for Dave and thrilled that we can honor somebody like him.”

Andrews, of Wilbraham, Massachusetts, recently completed his 26th and final season as president and chief executive officer of the AHL. He has overseen the expansion and development of the league since 1994, and throughout nearly three decades of service, the AHL has grown from a regional 16-team format to a 31-team league in diverse markets across the country.

“You look at the size of the league, the way it’s expanded over the last 25 years under his tenure, the way franchises have stabilized and the expansion to the west coast … it’s been huge,” Kelleher said. “All those things have made the American Hockey League successful but have also played a big role in helping to make hockey in America successful.”

A key moment in league history came in 2001 when the AHL absorbed six teams in Milwaukee, Chicago, Houston, Utah, Manitoba and Grand Rapids, following the closure of the International Hockey League.

“I think expansion is something that I’m very proud of, but more importantly, what does the league represent now, and what have we achieved through that expansion,” Andrews said. “We now have one league that essentially almost 90% of the NHL players come through our league, most of the NHL coaches, general managers and all of the officials have come through the league. Our place in the game changed dramatically and our expansion out west made a big difference in terms of the footprint for us and what we could do in helping to grow the game.”

Andrews has also been a staunch supporter of USA Hockey initiatives like Try Hockey for Free, Hockey Week Across America and more.

“We’ve had a pretty close partnership with USA Hockey over the years and we’re very grateful for that,” Andrews said. “If you look at USA Hockey’s prominence in the game and how much it’s grown in true development of elite players … a lot of those guys have come through the American Hockey League to the point where they could represent their country in Olympic games and the World Championships.”

Andrews has also distinctly defined the AHL’s current path. Kelleher believes Andrews has taken the AHL and developed it into a marquee sports property in the United States and Canada.

“They do it the right way, and I’ve been so impressed with the way they operate and the way they do things under Dave’s leadership,” Kelleher said. “They know exactly who they are and exactly what they’re supposed to do. They develop players and people for the next level, from the American Hockey League, to go to the National Hockey League. That’s so rare these days when people try to do more than they can, or be more than they are. The American Hockey League does an incredible job and Dave’s been the leader to make that all happen.”

Andrews also played an integral role in the implementation of innovative rule changes and increased player safety initiatives throughout the league during his tenure.

“I think our impact on rule changes is probably far greater than most people know,” Andrews said. “Obviously, we have done a lot of testing of rules for the NHL over the years, but we’ve also contributed to the rules of the game on our own that we felt would be good and eventually were taken to the NHL. I think we’ve had the opportunity to make a difference in the game and we’ve done that very respectfully and responsibly.”

Andrews also developed corporate and broadcast partnerships to establish strong platforms for viewership of league games and events, which has played an important role in added visibility of the sport. He has witnessed that transformation, firsthand.

“I think anytime we’ve had Calder Cup presentations in buildings like Cleveland and Philadelphia with more than 20,000 people in the building, and that’s a moment where the emotion sort of gets you and you say, ‘Wow, we really accomplished something,’” Andrews said. “We’ve had similar experiences with our outdoor game in Philadelphia that drew more than 47,000 and had a great game that went to overtime. Those sorts of moments are things you remember. It’s a sense of, ‘Wow, we have come so far.’ The emotion of the moment makes you proud.”

The proudest moment league-wide, Andrews recounted, came in 2001 during the league’s expansion.

“That was a major, major step that changed the course of the league,” Andrews said. “It was a difference maker in terms of changing our footprint and satisfying the needs of our western-based NHL clubs.”

In recognition of his contributions to hockey in the U.S., Andrews was also awarded the Lester Patrick Trophy in 2010, and has been inducted into both the British Columbia Hockey Hall of Fame in 2005 and the Nova Scotia Sport Hall of Fame the following year.

“He’s such a perfect hockey gentleman,” Kelleher said. “He’s certainly much deserving of this honor and he’s earned it over the years.”

Moving forward, Andrews will be officially retired, but continue to serve as chairman of the board of the American Hockey League, though not directly in the office. His biggest goal will be spending time with his three children and eight grandchildren.