Hank Manz has worked tirelessly for the last three decades to make sure that the Lexington-Bedford Youth Hockey program’s in-house league is all about having fun.

Manz and his tireless efforts earned the Lexington, Massachusetts, native the Wm. Thayer Tutt Award. The distinguished honor is presented annually by USA Hockey to a volunteer who, during many years of service, has displayed a selfless dedication to the enhancement of ice hockey at the grassroots level in America.

“It just blew me away completely,” Manz said. “It’s a huge honor and I had no expectation. I was just absolutely and completely surprised. In-house hockey has grown to be a big part of our program. It’s something that draws players in, and even if they don’t continue with hockey, they remember the experience. So, getting an award for doing that for all these years is fantastic.”

The Wm. Thayer Tutt Award is the top volunteer honor awarded by USA Hockey each season. It is named in honor of the late William Thayer Tutt, who served as president of USA Hockey from 1972-86.

“It’s a huge honor for the program,” LBYH board president Ron Tashjian said. “[Manz is] an icon at the rink. He’s been volunteering his time for years and he’s really the face of the program. Everyone that comes into the program, especially the in-house program, knows Hank.” 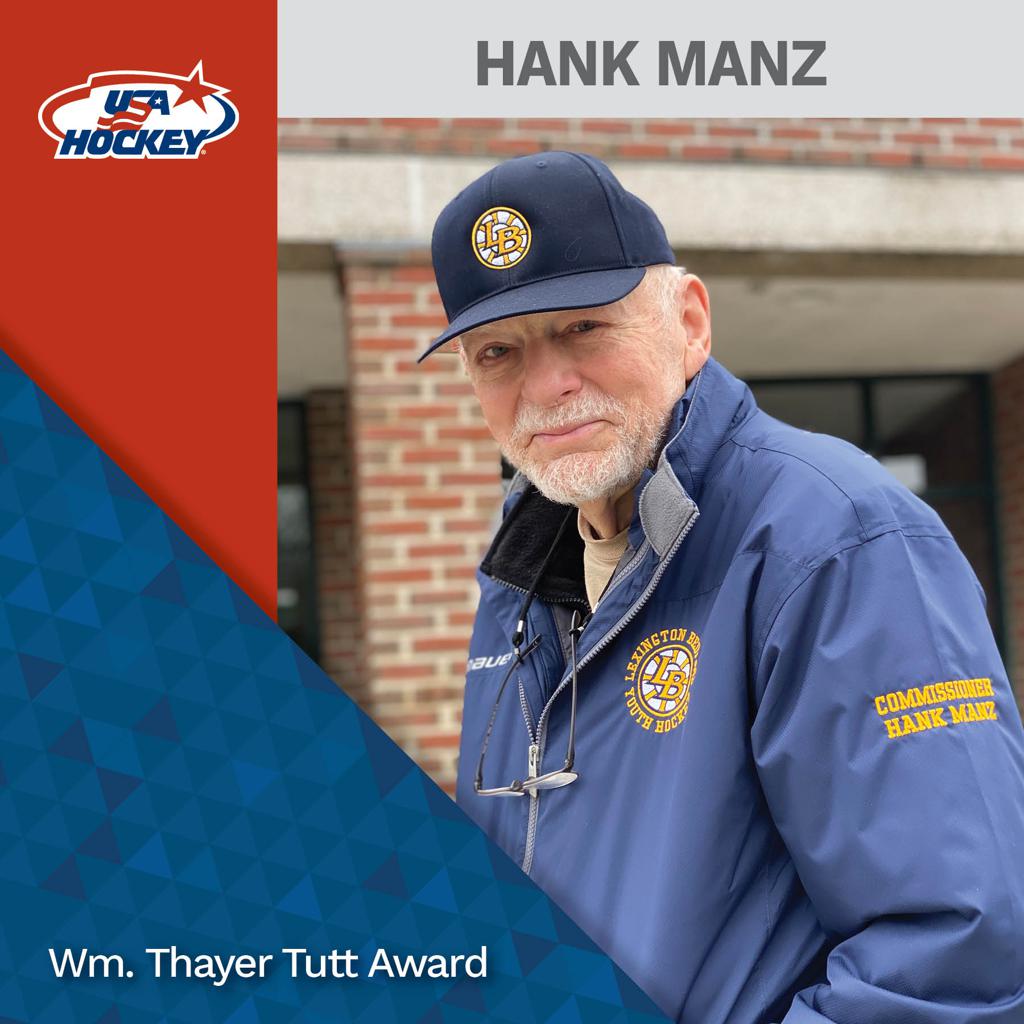 Manz, 77, has been in his current role for about 30 years, combining a tireless work ethic with a leadership style that promotes encouragement and brings others to the forefront.

Manz also created a league that emphasizes fun. The in-house league, now comprised of 16 teams, features boys and girls age 5-11 of varying skills and experience. The individual lines are designed by a wide spectrum of skill, so a 5-year-old might be matched with an 8-year-old beginner.

“When we put together our teams, I want them all to win half of their games and lose half of them,” Manz said. “That’s how we made the teams, and the coaches have assisted in that. We came pretty close this year. We had several teams right in the middle all tied, and that’s excellent. It means we did a good job of putting teams together.”

Manz, the commissioner of the league, handles everything from organization of the schedule, team jerseys, ice time, standings, playoff format, goalie equipment and much more. He attends more than 150 games a year and he’s visible at the rink every morning beginning at 5 a.m.

“He turns the lights on and gets everything ready,” Tashjian said. “He facilitates the start of it, assembling the boards at center ice. He has statistics, he keeps all the scores and standings logged, he’s really well respected by the coaches and he talks to them about the rules and how they should be followed. He is definitely the glue to the fabric that keeps everything together.”

Manz, who is also a local scoutmaster and town selectman, fell in love with the sport while serving in the U.S. Navy in California.

“I scored my first goal at the age of 41,” Manz said. “Then two guys convinced me to take over an in-house league and it was absolutely perfect. It matched my skillset and I started playing more adult hockey.”

Manz said former Boston Bruins great Cam Neely once had a child play in the in-house league. Additionally, Claude Julien, former coach of the Bruins, and current Montreal Canadiens coach, also had a child that played in the league.

“One of the teams was, of course, named the Bruins, so [Julien] would always come down and talk to the kids,” Manz said.

Manz and his wife Wendy have three adult children, Kathryn, Erin and Jonathan. Tashjian said that Manz is always making decisions for the betterment of the program.

“It’s never being selfish, one-sided, or anything self-serving within the program to make himself look good,” Tashjian said. “When things aren’t good, he’s the voice of reason. When there’s confrontation, he’s the voice that settles things down. He extends his life, his heart and his family to the program, and he just wants the kids to have fun.”

Manz explained that there used to be an executive board within the league, created for the purpose of quickly diffusing disagreements. A typical suspension lasted one game, but Manz said the league turned so cordial, without any suspensions in several years, that officials decided to dissolve the board.

“We didn’t need it anymore,” Manz said. “The coaches are very good at solving problems themselves. I used to joke that I never fired a coach for a win-loss record, but I have fired them for failure to bond with parents and players. I haven’t had to do that in 10 years. I think everybody understands that the league is there for fun.”

The league, arguably, has its biggest day during a mammoth end-of-season banquet, organized by Manz.

He puts together a yearbook, which include photos and rosters, given away during the banquet. Manz is there for setup, he’s there for teardown and he gives away the championship awards. Manz arranges for players to receive pucks in a small case when they score their first goal, in addition to a goalie trophy when they play goal for the first time.

He also presents awards, which include recognition for graduating players, the “Dream Big” award and the famed “Anchor” award among others.

“We always present the anchor trophy,” Manz said. “The team that finishes last in the league gets the biggest trophy. We say that they probably worked and worried harder than all the rest.”

Manz continued to serve the league this past fall, all while battling illness. Manz said he’d like to continue volunteering “one more year at least,” if not longer.

“You wouldn’t know how much he does until something happens like when he got sick this winter,” Tashjian said. “It took basically an army to replace what he does on his own because he dedicates a tremendous amount of time to this.”

Brad Conlin, league vice president, also attempted to fill in while Manz was out.

“The amount of effort and work he puts in is really unbelievable,” Conlin said. “I’ve tried to fill in and I can maybe last a week. Fortunately, there’s enough of us to try and help. It’s just the hours he spends doing all of this and creating this atmosphere.”

It’s all to make sure that the players ultimately have fun.

“I’ve heard so many people tell me that their best hockey experience was playing in this league,” Conlin said. “The teams that win or lose is almost an afterthought. He wants to make sure that everyone has a good time and a chance to play. He does all of these things that make the league run so efficiently. He’s thought of everything, and if he hasn’t, he’s going to have an answer to you by next week.”

Tashjian said there’s a plan in place to celebrate with a “Hank Manz Day” in the fall.

“He may not express that, but I know deep down this is a massive honor for him,” Tashjian said. “This is sort of the culmination of what he’s done. This is his body of work and it’s now being recognized by the highest authority within hockey. I think it leaves a nice legacy and it means a lot to him, but he would never expect any of this to happen.”

Bryant McBride, a league volunteer, spoke of Manz’s generosity and his relentless work ethic, calling him a great leader and example for other volunteers in USA Hockey.

“He sets the tone in that league and in that building,” McBride said. “He always wears a big smile, he’s high-fiving kids and they’re thrilled to see him and be at the rink. He never seems to have a bad day.”

One of Manz’s greatest qualities, McBride said, is his ability to listen and selfless approach to leadership. It’s also a big reason why Manz is this year’s Wm. Thayer Tutt Award winner. 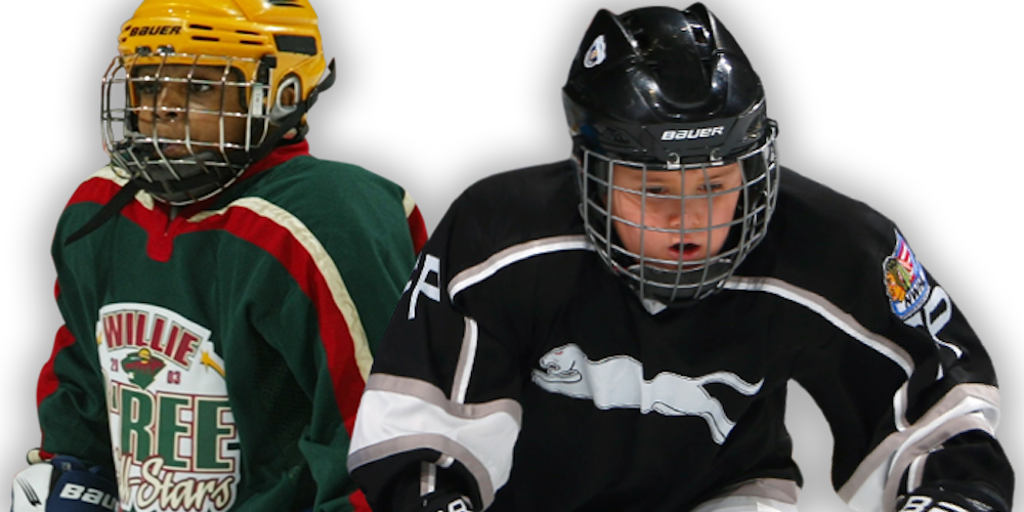