Tom Kehr has always known that in order for youth hockey players to learn the game properly and become fundamentally sound, good coaching is key.

That is why for the last 36 years, Kehr has made every effort to be a hands-on coach on the ice as well as off the ice as an integral part of the Coaching Educational Program (CEP) in Michigan.

After passing the master’s level coaching certification in 1992 — eight years after first starting to coach hockey — Kehr was asked if he’d like to get involved with volunteering on USA Hockey’s end. He gladly accepted. 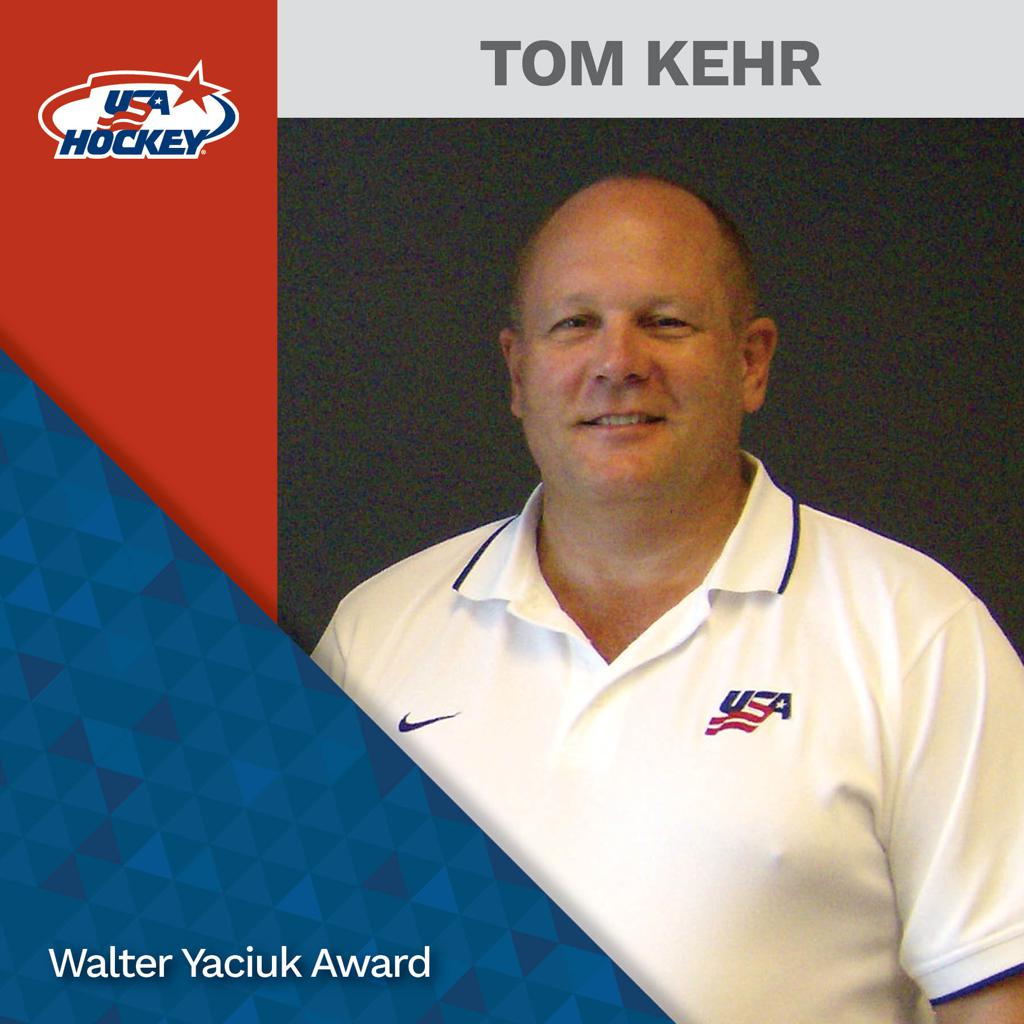 For his nearly four decades of volunteering and educating coaches, Kehr was named the 2020 USA Hockey Walter Yaciuk Award winner.

“I’m humbled beyond words to be mentioned with a group of previously distinguished Walter Yaciuk Award winners,” said Kehr, who has been the associate coach-in-chief in Michigan since 2000. “I know a number of them and it’s a very esteemed group.”

Michigan coach-in-chief Jack Witt met Kehr 30 years ago at an advanced level coaches clinic and the two became friends. No one knows better Kehr’s dedication to educating coaches in Michigan than Witt.

“The word ‘passion’ gets overused, but he really does believe passionately in the mission of the coaching program, which is to improve the quality of coaching in the U.S. and thereby help our players get better as well,” Witt said.

Kehr, 70, puts an emphasis on having experienced coaches at all levels. The players want to have fun, and coaches need to provide a positive environment.

“It’s really up to us as coaches to be energized and continue that enthusiasm to keep them busy while at the same time explaining to the parents that are paying the money what the expectations are for the money that they’re paying and the expectations that we have,” Kehr said. “What’s your son or daughter going to learn while they’re here and then preparing them for the next session.”

Learning Along the Way

With a family lineage of hockey — Kehr’s kids’ grandfather is the late Al Renfrew, who was a successful player and coach at the University of Michigan — it’s no surprise Kehr’s kids were interested in playing the game.

When Kehr’s oldest son, Rob, was four in 1984, the two went out to a rink in South Bend, Indiana, to learn the game. There was one coach working with about a dozen young players and Kehr was asked if he was interested in helping out. He was happy to help even though he had never played organized hockey. Kehr wasn’t exactly sure how to teach the players.

However, things went well and Kehr’s son’s coach mentioned he would be moving up to the next level the following season with his son and the team would need a coach. Kehr talked it over with another parent and the duo took on a co-coach role.

“We coached together that year and had a lot of fun and I decided that I wanted to continue on in the Coaching Education Program,” Kehr said.

In October 1985, Kehr attended an Amateur Hockey Association of the United States (AHAUS) — later USA Hockey — clinic in South Bend and passed the exam to become a certified coach.

Over the next seven years, Kehr moved up the coaching ranks to achieve his master’s level certification.

Kehr coached house and travel teams in South Bend for seven years — with three of his kids playing for the Irish Rovers. Kehr’s fourth kid started to play in Saginaw, Michigan, in the late 1980s after the family moved north.

“He coached in the Saginaw area here in Michigan for a number of years,” Witt said. “He went to at least one national championship with USA Hockey. When you get to the nationals, you’re doing something right. He had that going for him before he got involved in the coaching program.”

Kehr also helped coach at Grand Valley State University when one of his sons played on the ACHA Division II club team at the time.

Kehr got involved with USA Hockey’s CEP in 1992. When the position of coach-in-chief for Michigan became available in 2000, he was interested in the position, as was his friend, Witt.

“Jack and I both went down and interviewed for the Coach-in-Chief position and since Jack had been a MAHA [Michigan Amateur Hockey Association] director, he had the experience,” Kehr said. “He became the CIC and at that same time he asked me if I’d be willing to be an associate CIC and I said yes.”

When Witt took over as coach-in-chief, he knew who he wanted as his right-hand man.

“I recognized the contributions he had already made and the great advice he gave me, both as an instructor and later on with me taking on my leadership role,” Witt said.

Since taking over as the associate coach-in-chief, Kehr has quite a few responsibilities in the state through the CEP.

“When I moved over here to the west side, I was responsible for what they would call Michigan Districts five and six, which was all the west side and the northern lower peninsula, if you will,” Kehr said. “After one year of Jack being the coach-in-chief, the first year he ran what they call the ACE program, which was the Association Coaching Educator program, and each one of the associations was to have an ACE director. Starting year two and ever since then, I’ve been responsible. I’ve been the Michigan ACE director.”

In the late 2000s, Kehr became the national ACE administrator for a couple years. That proved a lot of extra work for Kehr, having to head to USA Hockey Annual Congress and other national events.

“What Tom took on additionally was working with every hockey program’s coaching director or head of coaches and show them how they could improve their program locally in addition to running our statewide clinic. That was an extra role he took on and I give him credit.”

The last four years, Kehr has had a little more time to concentrate on his role as the associate coach-in-chief after retiring from his day job in 2016 as a plant manager at Kellogg’s. Kehr still enjoys spending time educating coaches statewide, but he knows his time is winding down.

“Just two weeks ago, we had our 15th grandchild,” Kehr said. “To be honest with you, I’ve got an awful lot of enjoyment these days in terms of teaching my grandchildren the fun of learning to skate. I’ve taught a number of them to skate.”

Even as a grandfather, Kehr can’t help but teach. Like the saying goes: Once a coach, always a coach. 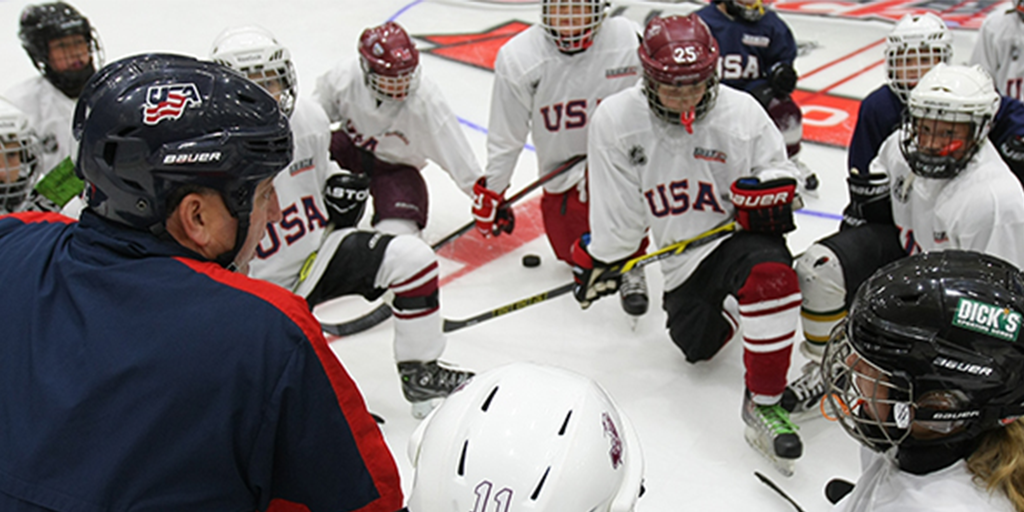