After being wounded in Iraq, Kusch played club hockey in college and earned a Team USA selection for Disabled Hockey World Cup

Gliding along the ice, stick in hand, hockey has become so fluid and natural to Raymond Kusch.

But with one prosthetic leg, it wasn’t always a joy to play the sport so many take for granted.

Eight years earlier, Kusch would have never even imagined he would be playing hockey after a horrific wartime injury shattered the well-being of the U.S. Army sergeant. What has transpired after that life-altering moment has been truly spectacular.

It’s been an unbelievable past year for the 29-year-old from Clio, Michigan, who is now addicted to hockey. He plays on the Spirit Warrior Hockey Team, a squad in the USA Hockey warrior division that is comprised of disabled veterans; played a semester for the University of Michigan-Flint, an ACHA Division III program; and, despite the event’s postponement, was chosen to play for Team USA in the 2020 International Disabled Hockey World Cup.

For all he has achieved on the ice, Kusch was named the 2020 USA Hockey Disabled Hockey Player of the Year. 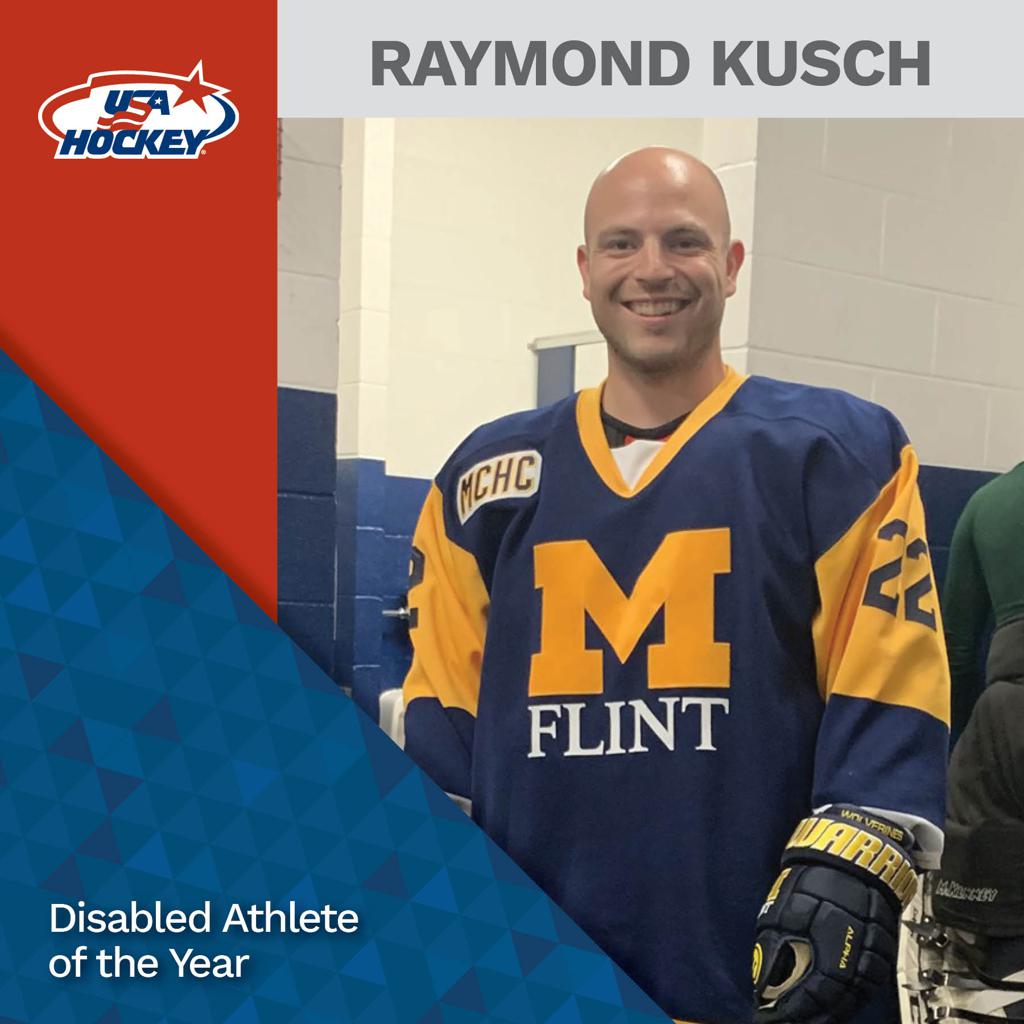 “To be honest with you, this might be the accomplishment that I am most proud of in my civilian life, by far,” Kusch said.

Kusch has put all his heart into hockey the last three years, and he’s reaping the rewards.

“I’ve seen the impact that I’ve had on other disabled people, even able-bodied people, by me going out there and doing it,” Kusch said. “It’s rewarding and it’s purposeful, which are things that I value a lot. I can’t put my finger on it, but when I got the call to say that I’d won this award, it was huge. In fact, it was more than that, it was life changing.”

UM-Flint men’s hockey coach Michael Schunot, who has been coaching the sport for 19 years, had the pleasure of working with Kusch this past season.

“For me as a coach, I have been blessed at the University of Michigan-Flint. My first year, we were in the national championship game. We’ve won tournaments. We’ve had 30-win seasons. For me, this is my proudest moment as a coach,” said Schunot, getting choked up.

Growing up in the Detroit suburb of Gibraltar, Kusch wanted to try hockey as a youngster, but the cost to rent ice was too much for his family. It would be almost 20 years later when he got a shot to play hockey.

Ever since he was four years old, Kusch wanted to be in the Army. He enlisted four days after his 17th birthday and went to basic training between his junior and senior years. After graduating from Carlson High School in May 2009, five months later, he was deployed to Iraq. Kusch spent 12 months on that tour and became a sniper. In early 2012, Kusch’s team was integrated with a team from Marine Special Operations Command (MARSOC) and sent to Afghanistan.

On July 9, 2012, Kusch and his team went to set an ambush on an improvised explosive device (IED) factory in a Taliban hotbed. While traveling to the site, Kusch and another soldier got separated from their patrol.

“We were going, and we saw our people and there was a wall in between us, which is pretty common,” said Kusch, who was just 21 at the time. “We get a lot of counter IED training and I did an assessment of where I should be crossing, which matched where they were at. So, I went to cross the wall and right as my toes touched the other side of the wall, I was launched 10 feet in the air and 10 feet over and landed on my back.”

Kusch’s left foot was blown off. He had shrapnel wounds to all extremities, including muscle blown out of his right arm causing nerve damage in his hand, a broken left hand, a punctured ear drum, a traumatic brain injury and PTSD. He also sustained secondary injuries such as gastrointestinal problems and chronic kidney disease.

Kusch didn’t want the men he was in charge of to worry about him. So, in order to ease the tension, Kusch amazingly kept cracking jokes while getting carried off the battlefield. That’s who he is.

“I wanted to be in the Army since I was four, so my initial reaction was, I don’t care what I have to do, I want to get back to my guys while they’re still in country,” Kusch said. “I realized that was a little naïve at the time. Then after that, I was like I’m going to find a way to stay in the Army, but then realized that retiring out was my only real option.”

Even through his long road to recovery, Kusch remained positive. He invested in a small business with a military friend and after exponential returns after just two-and-a-half years, the company was bought out by an outside firm.

With life starting to get somewhat back to normal, hockey entered the equation again. Kusch had a friend who liked to attend open skating, so Kusch was asked if he and his wife wanted to get out on the ice.

“I’m always willing to try something new,” Kusch said. “I go and I rent skates and I put my prosthetic in it, and I go out on the ice and it was an absolutely terrible experience. One of the worst experiences ever. My prosthetic wasn’t adjusted correctly for it. Honestly, didn’t know how to compensate for the slickness or how to use my edges, so that caused my residual limb to go in all different weird ways and it was super painful. I was like Bambi on ice, man. I was glued to the boards. I made it about halfway around and I was like, ‘Well, all right. I’ve got one leg and I guess ice skating’s one thing I can’t do.’ It kind of made sense.”

In 2016, Kusch enrolled at UM-Flint to pursue a degree in entrepreneurship and innovation management.

The next fall, Kusch started working at the Student Veterans Resource Center at UM-Flint and his boss, who was also a disabled veteran, told him about the Spirit Warriors Hockey Program. Kusch told his boss his experience with hockey, but he was reassured the coaching staff would make hockey fun. Kusch gave the sport another try.

“Within the first 10 or 20 minutes, they had me skating around the ice, chasing the puck,” Kusch said. “Something just flipped in me. I was absolutely addicted to ice.”

Kusch started taking private hockey lessons. Just like everything in his life, Kusch went after it hard.

That same year, Kusch got an email about recruiting UM-Flint students to the hockey team. No experience was necessary. Kusch was reluctant but contacted Schunot, who was a retired military member himself.

Kusch came to a practice and showed off his skills, but Schunot didn’t think it was safe for Kusch to play.

“I’ll be honest with you, in the beginning hockey was a struggle for him,” Schunot said. “For a guy who did not play when he had both legs and to start playing when he had a prosthesis was difficult. He would come to practices and things like that and over time he as a dedicated individual started getting better very quickly.”

Classes became too time consuming, so Kusch stepped away from practicing with the team. However, he kept taking private lessons.

By the start of Kusch’s senior season, some of his hockey friends were impressed with his on-ice skills and told him to try out for his college team again. As luck would have it, Schunot had a roster spot available.

“He and I were talking about it and I said, ‘Ray, if you want to play, we’d be happy to have you,’” Schunot said. “His eyes lit up and he was excited. He started to play and honestly did a great job for us.”

Due to him graduating in December of last year, Kusch was only eligible to play for a portion of the season. During the majority of the games he played, he skated full shifts.

Kusch was proud to play in 11 games and earn one point. Being the only disabled player on the ice each night didn’t slow down Kusch.

“I think what a lot of people forget, unfortunately, is because I have one leg, they look at me like I’m glass,” Kusch said. “But I was also a very high performing individual in the Army that was on multiple combat deployments by the time I was 21. The moment that my coach realized I wasn’t made of glass, I started getting more and more shifts.”

It didn’t take long for Kusch to earn the respect of his teammates as well as his opponents. Schunot will never forget giving Kusch a starting nod at forward in a game against Oakland University.

“When they called his name and he skated out to the blue line, everybody on Oakland’s team tapped their sticks and kicked the boards as a sign of respect for him,” Schunot said. “Not only our team, but the teams we played really had a deep respect for what Ray was doing.”

Schunot got stopped all the time after games and was asked about Kusch. Everyone praised his effort.

“He’s just a wonderfully humble human being,” Schunot said. “He’s a guy that has every right to complain and be upset about life but never does. He’s one of the most positive people and thankful people I’ve ever been around.”

Kusch, a 4.0 student, graduated from UM-Flint last December and was selected by a board of school officials as a commencement speaker. He was honored to represent his peers.

This was supposed to be a big hockey year for Kusch, but the coronavirus pandemic put a stop to that. After competing for Team USA’s Standing/Amputee Team in the 2019 Disabled Hockey Festival, Kusch was selected to play in the 2020 International Disabled Hockey World Cup in May. However, that was canceled.

Kusch is commonly asked why he doesn’t play sled hockey since he’s eligible.

Kusch proved to himself he could play able-bodied hockey at an extremely advanced level at UM-Flint as well as qualifying for the World Cup team.

“I might be disabled, but it’s not stopping me from anything,” Kusch said.

Nothing has ever slowed down Kusch. If there’s an obstacle, that just pushes him even harder to succeed.

Schunot can’t believe all the adversity Kusch has faced in his life and turned it into triumphs. Being a veteran, Schunot isn’t sure he could have overcome what Kusch has with losing a leg and coming out stronger on the other side.

“I know for me personally, I don’t believe I have the inner strength that Ray does,” Schunot said. “I think few people do. I think that’s what makes him special. 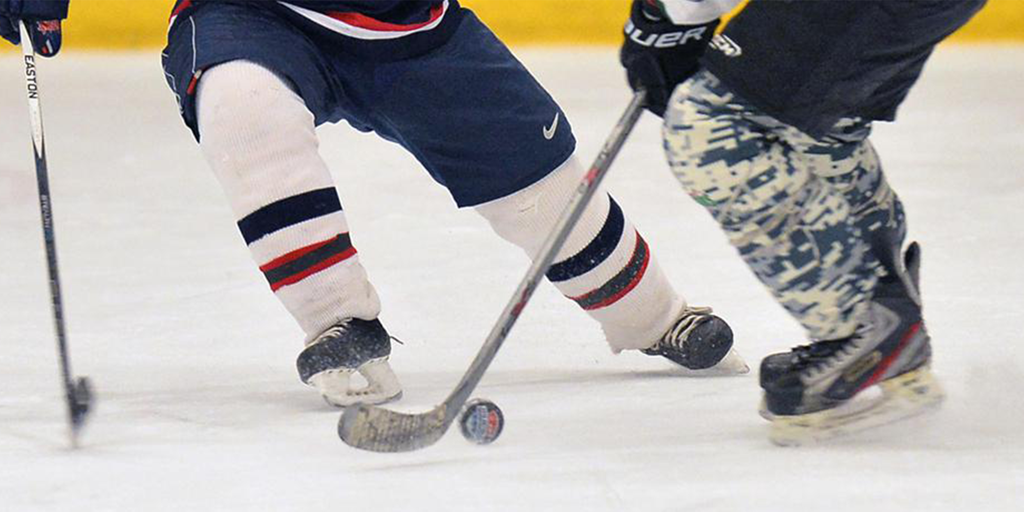