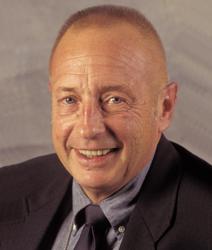 John Dotte (Fort Edward, N.Y.), who was one of USA Hockey’s top volunteers for a quarter century (1981-2006), passed away peacefully today (May 4) at his home after a battle with cancer.

“John dedicated much of his life to helping our game grow and flourish,” said Jim Smith, president of USA Hockey, “and the positive impact he had on our sport continues to be felt today. Our condolences go out to his wife Ann and the entire Dotte family.”

Due to the COVID-19 pandemic, funeral services will be limited to family members only.

Below is an archived story on Dotte from the USA Hockey Magazine archives.

Under John Dotte’s leadership, youth hockey around the United States has not only gotten bigger, it’s gotten better.

From the number of girls playing the game to a renewed emphasis on skill development and fun at the youngest ages, the game has improved under Dotte’s watch as USA Hockey vice president and chairman of the Youth Council.

“Every decision John made has been done with the good of the kids in mind,” said Kevin McLaughlin, director of youth hockey for USA Hockey.

“From the implementation of the cross-ice and initiation programs to the expansion of our select camps and National Championships, a lot of great things have happened under John’s leadership and direction.”

For all he’s accomplished in his 25 years with USA Hockey, Dotte may be most proud of his role with helping to create a Tier II National Championship for community-based teams.

“Tier II gave kids and communities the opportunity to play in a National Championship,” said Dotte, who became involved with hockey in 1968 by shoveling snow off the outdoor rink in Fort Covington, N.Y.

“Over the years, the Youth Council has been a great team effort, always looking for ways to raise the bar and provide more opportunities for more kids to enjoy our great game.”

Dotte announced his decision not to seek another term on USA Hockey executive board at the most recent Annual Congress. His seat will be filled by Dave Klasnick, who has served as National Championship director for the past five years.

In addition to recognizing Dotte for his years of service to the organization, USA Hockey’s board of directors unanimously elected him to the title of director emeritus.

“It’s been a great ride, and I couldn’t have done it without my wife Ann by my side,” said Dotte.

“From time I started in New York State Amateur Hockey to my time with USA Hockey, Ann has been there for me. She’s been a great sounding board and given me great advice over the years.”