Ice hockey is a fast-paced sport that requires all five senses. The sight of a jam-packed arena, the sound of your teammates cheering you on, the smell of your gear after a hard practice, the touch of an opponent’s hand when you shake hands after the game and the taste of victory.

The hockey community, players, parents, coaches, officials and fans, all experienced a sense of loss after having to put their seasons and even their lives on hold due to this nationwide pandemic.

While some people may have tried to fill the void by suiting up to do the dishes or drawing up practice plans for your at-home workout routine, many are reuniting with the hockey community online.

USA Hockey came up with a way to keep coaches engaged during this universal downtime by hosting a virtual webinar series with a variety of guests and topics.

“Initially this started as a way to keep our coaches involved, but it evolved into so much more than that” said Dave Caruso, manager of the Coaching Education Program at USA Hockey. “It really is an opportunity for coaches, members or anyone involved in hockey for that matter to further their learning for free despite being confined to their homes.”

Caruso detailed that the hockey department has hosted four webinars a week for the last month or so and that they plan to continue at this pace until mid-May. Attendees are able to ask questions in real time, which allows presenters to engage with participants and customize the conversation.

“We have had a lot of people reach out who are eager to participate,” Caruso said. “All of our guests bring really great knowledge and great ideas to our audience. Although each presenter covers a variety of different topics, everything relates back to the youth sports experience with the underlying message: never stop learning.”

It’s certainly not just the abundance of free time that has contributed to the success of this webinar series. ADM Manager of female hockey Kristen Wright, who also spearheads the now-online Intern Coach Program, explained that there are a lot of moving parts behind the scenes that has led to its overall success. 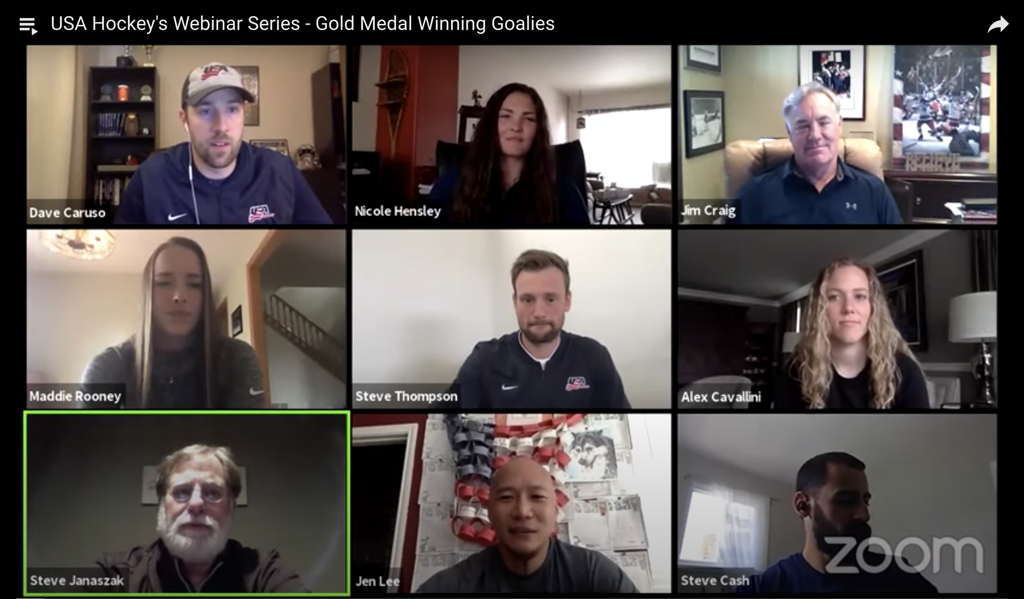 “The people involved and their passion to try something new is what makes this all come together,” Wright said, “Our ADM staff, coach education staff, volunteers and previous mentor coaches for the intern program spent a lot of time crafting the agenda to make it work in a virtual environment.

“The effort put in by our coach developers to test out the new CEP Curriculum in this medium has also made these webinars successful. They have all adjusted their content to ensure that the sessions are interactive and engaging, while also informative.”

While it has been beneficial for organizations to supplement cancelled events with online alternatives, Wright explained that these online communities are equally if not more important for attendees during this time of isolation.

Chi-Yin Tse, who currently serves as the manager of the Oakland Hockey club in Oakland, California, has participated in every webinar thus far and has been able to attend the majority of them in live time.

“My coaching philosophy has been right on par with a lot of the speakers,” Tse said, “But being able to hear more content and to direct my coaches and parents to these webinars has really helped my program.”

A New Jersey native, Tse started playing hockey at 14 years old and has been involved with the sport in some capacity ever since. In his current role, Tse manages all hockey programs from learn to skate to travel programs and adult hockey. He’s spent the last three years growing the program and working to build a hockey community in downtown Oakland.

“These webinars have helped me to shape my own coaching philosophy and how I can now implement more content to our coaches, parents and players,” Tse said.

While there have been so many great presenters, Tse noted that one of the most important topics for him was facilitated by Dr. Tiff Jones and her discussion on mental health. He said he used what he learned from that specifically to reach out to his athletes to see how they are coping with the stay-at-home orders during this time.

Virtual webinars have been beneficial for both educators and attendees as a way to stay connected during this uncertain time. The idea may have started for just coaches, but now its reach goes beyond the coaching community and spans to players, parents and many more.

Everyone can relate to the sense of loss and isolation due to this pandemic, and while people could never replace the feeling, the sights, the sounds and the smell of being back on the ice, the hockey community has rekindled its sense of togetherness in the online space through virtual learning.