David Carle was 28 years old when he was named head coach of the University of Denver’s men’s hockey program. Two years later, at the age of 30, Carle remains the youngest active head coach in NCAA Division I hockey.

An early 45-21-11 all-time record as head coach, including a Frozen Four appearance in his first season behind the bench, sounds impossible for such a young coach. However, it was early adversity that pushed Carle so quickly into coaching.

Growing up in Alaska, Carle’s hockey story begins further north than a typical USA Hockey player. His older brother, Matthew Carle, played hockey at an early age and so naturally David became interested in joining backyard games. With the addition of their younger brother, Alex, the Carles became a true hockey family playing high school and travel hockey in The Last Frontier.

“We had a backyard rink for a little bit of our childhood and being in wintery Alaska we had some good opportunities to play outdoor,” said Carle. “Every school had an outdoor drink. You’d call up a few of your friends, maybe four or five guys, and play posts. You’d throw a cone out and that was the tag up line, or you’d play 2-on-2 against each other. No gear, just putting on your skates and gloves and try to stay as warm as you can. Maybe one of the parents is keeping the car running so we could get warming breaks and some hot chocolate.”

While having three sons heavily involved with playing hockey, the Carle family focused on creating balance throughout the season to help their kids enjoy sports.

“Our parents were so busy with three boys that they would tell us, winter is for hockey and summer is time for our cabin. We were outside a lot, playing on the water, skiing and taking a reprieve from the game,” said Carle. “We were getting a break from it so that when the season rolled around in the Fall we were very excited about getting back on the ice again.”

Despite being recruited to play college hockey, Carle was diagnosed with hypertrophic cardiomyopathy at the NHL combine in preparation for the NHL Draft and what would have been his freshman season with the Pioneers.  Hypertrophic cardiomyopathy is the primary disease of the myocardium muscle of the heart, and forced David into an early retirement from playing hockey.

Gwozdecky was the one who turned David’s life-altering health discovery into the opportunity of a lifetime. Carle, despite not being able to play, still attended Denver and served four seasons as a student assistant coach with the Pioneers until his graduation in 2012.

“I’ve been given a lot of opportunity in my coaching career and I’ve been fortunate to learn from some great coaches including George Gwozdecky, Derek Lalonde and Jim Montgomery,” said Carle. “In terms of coaching advice like anything in life, we try and look for an edge and start to complicate things. For me, to have success at any level, you have to be a high-level communicator. You have to have a plan, communicate that plan, and build relationships to execute the plan.”

After graduation, Carle was hired by Lalonde with the Green Bay Gamblers of the United States Hockey League, USA Hockey’s only Tier 1 junior hockey league. It wouldn’t be long before he was called back to Denver, this time as an assistant coach.

Since taking over the program, Carle has focused on recruitment and maintaining the championship culture at the University of Denver. 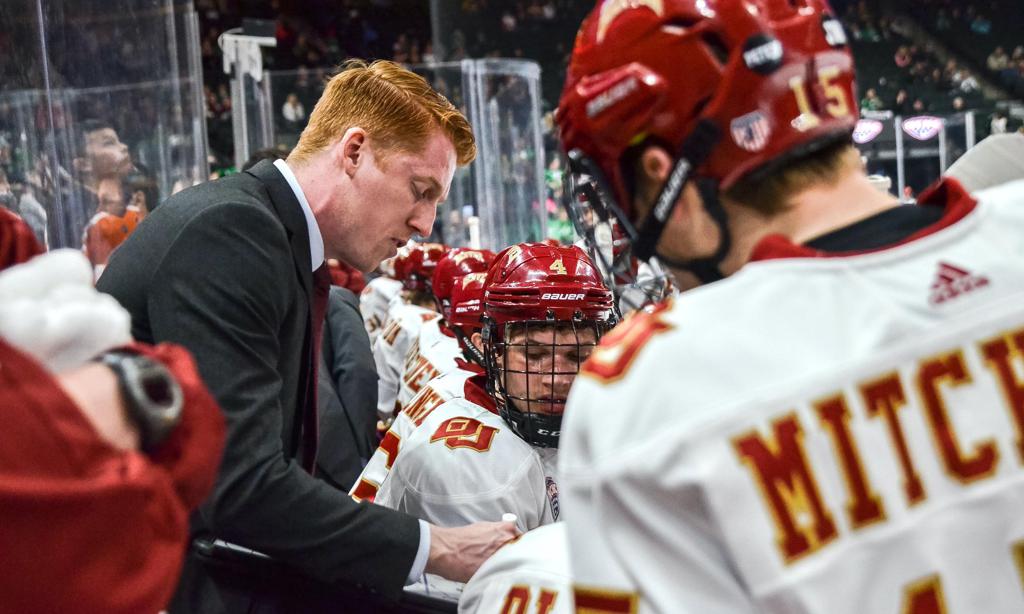 “Every kid is different, but we try and focus on communicating with the player about what they want from their college experience,” said Carle on the foundation of building his program. “Everyone plays a role in building relationships and communication throughout the program.”

Even day-to-day practice plans help make sure the athletes are engaged in a way that is fun.

“When even looking at 6 to 12-year olds and trying to keep them engaged, it relates to all players at all levels,” added Carle. “At the end of the day we do play a game, and is it hard work? Yes, it is. But it should also be enjoyable. We do different team building things, small area games to make things competitive, and help change things up here and there. It helps us make sure they’re looking forward to coming to the rink every day.”

Carle and his staff had to think quickly as their season, and ultimately their campus began to shut down. Denver students left campus in less than 24 hours as the nationwide quarantine was implemented due to the coronavirus pandemic. Players returned home for summer, some even internationally, in an effort to complete courses online and submit their respective finals.

One aspect that Carle didn’t want his players to leave behind was the sense of team, and the trust and communication that is involved with teamwork. He went about a creative way to establish communication channels outside of social media and video games.

“The biggest challenge for hockey players right now is not being able to go to rinks and be with one another, they don’t have their typical resources to make themselves better,” said Carle. “We have tried to facilitate communication as a staff. We’ve divided our team up into three pods and we put captains and seniors at the top of each pod to lead their group. They have topics to talk with their teammates about, and communicate at the end of each week, to have a conversation and try and work on their peer-to-peer communication skills. Ultimately, we believe in our sport that’s the most important aspect to have. They need to be able to communicate to one another.”

Denver’s director of sports performance, Matt Shaw, has also been heavily involved with maintaining communication. Shaw is developing workout plans using basement stairs, backyard fence polls or home gyms, whatever might be available to the players in an effort to give the team a sense of normalcy.

Carle and his staff look forward to playing hockey again once it is determined safe. Like many people, he acknowledges there are many people working through very stressful situations on the frontlines and families that are being disrupted during the pandemic. He’s noticed how many people are taking this as an opportunity to develop not professionally, but personally.

This offseason, even in quarantine, presents an opportunity for Denver to focus on its team communication.

“The better communication flows through your team, the more successful you’ll be and the more satisfied people will be.”