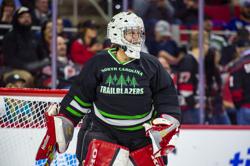 The rise of Southern-fried hockey undoubtedly stemmed from the Hartford Whalers’ move to North Carolina, where they became the Carolina Hurricanes. North Carolina has been home to a number of minor league hockey programs, including the Raleigh Icecaps and Greensboro Generals. But it was the high-energy Hurricanes, their college football-style tailgating, and on-ice success that bred a growing legion of diehard hockey fans across the Carolinas.

For the first time, large numbers of boys and girls, men and women alike traded their basketballs and high-tops for sticks and skates. They were intrigued by an unfamiliar sport that highlighted speed, skill and physical play. Out of their enthusiasm, a number of teams and leagues began to form, giving hockey fans the chance to play at rinks around the state.

One of those groups was the North Carolina Trailblazers Women's Hockey Association. Founded in 1995, the Trailblazers offer women age 14 and up a place to play ice hockey while promoting competition, sportsmanship, athleticism and community awareness.

We sat down with goalie Margaret Lillard, a former Associated Press journalist and twenty-five-year hockey veteran, to get her thoughts on women’s hockey and the ever-increasing popularity of the Trailblazers organization.

USA Hockey: How did hockey (and the Trailblazers organization) become such a big part of your life?

Margaret Lillard: I grew up in the Southeast and Hawaii as an Army brat, so I didn’t see much hockey as a kid except for the Miracle on Ice game, which fascinated me. I didn’t see my first live hockey game until I moved to New York City in the early 90s and watched the Rangers’ first Messier-led run to the playoffs. After they won the Cup in 1994, we had the lockout – and I had to do something to feed my new hockey fever. I took skating lessons and bought hockey skates. The guy who sold them to me put me in touch with Aaron Foeste, who was teaching a women’s learn-to-play group, the Brooklyn Blades. It took me a couple of months to work up the nerve, but I skated out in my first practice in February 1995. I loved it immediately.

Five years later, I was preparing for a work transfer to Raleigh, and naturally, one of the first things I did – before looking at apartments or cars – was check out the hockey scene. To my astonishment, there were multiple rinks in the area as well as a full-fledged women’s hockey program, the North Carolina Trailblazers, that had started in April 1995, just a couple of months after I first began learning to play.

USA Hockey: Over the years, you and your teammates built the Trailblazers into one of the nation’s healthiest house league programs, but that success hasn’t come without changes and adaptation.

Margaret Lillard: Right. The biggest change is that we’ve morphed from a two- or three-team organization with regular practices and games against regional teams into a house league with six teams playing every Sunday night. Any time we wanted competition, we had to make a full travel weekend of it and play multiple games in the weekend. 2008 was the last season we fielded full-time “travel” teams, and the year our newish summer house league program was turned into a year-round affair. There are simply not as many women’s teams within a day’s drive anymore.

USA Hockey: Has the makeup of your group of players changed as well?

Margaret Lillard: When I first joined the Trailblazers in September 2000, it seemed a lot of players were transplants. At the time, a number of Canadian companies had sizable presences here and that helped fill our ranks. But over the years, we started getting more and more “homegrown” players – Southerners and transplants alike – who had only played a little hockey or none at all, but who were attracted by an all-female league with regular games and a welcoming atmosphere that encouraged learning.

By morphing into a house league, we’ve been able to bring in many players who can’t commit to the time and expense of travel, but who want to play regularly. We’ve also offered a less-daunting opportunity to women who are just learning to play, and those who played a long time ago and want to get back into it.

Some of our players, myself included, have gotten coaching certification. I’m one of several Level 4s and have used what we’ve learned to teach kids and support female adult beginners. The Trailblazers’ goal has been, from the start, to encourage women to play – and love – hockey. Our group now includes former college and high school players, hockey moms who got sick of being on the sidelines, NHL fans who wanted to challenge themselves, veteran players, “veteran” beginners and everyone in between – joined by friendship, team spirit and a shared passion for the game.

USA Hockey: In what is still regarded as a non-traditional market, how do you recruit new players and onboard them into the sport in a way that's not too intimidating?

Margaret Lillard: Many of our players will help out in coaching adult, women-only, and kids learn-to-play programs. That’s where we meet potential Trailblazers. Our players who go to Stick-and-Puck also have their eye out for potential candidates. Since we play year-round (winter, summer and fall), it’s easy to invite recruits to come see a game and meet other players, then of course join us for a beer afterward. Other women find us through our website, just as I did 20 years ago. If they show up mid-season, we invite them to sign up as a sub or to get on the list for the next season.

You’d be surprised how many times we might be at a game or some totally random, non-hockey event and discover that a woman we’ve just met has always wanted to try hockey, or already knows how to play. In fact, we have a small “library” of gear we can lend someone who wants to test their skating legs. We do require that new league players have basic skills and understanding of the game and their own gear, and if they need coaching, there are plenty of mouthy women like myself who are more than happy to oblige.

USA Hockey: What’s the biggest difference in the Trailblazers and other house leagues?

Margaret Lillard: We mix our teams so that they are all relatively equal in strengths and weaknesses. There aren’t enough women-only teams to divide up by skill level, so we try to assure that we have the best blend of players to get a decent amount of ice time for everyone, at a level where they feel they can compete as hard as they’re able without standing an unreasonable risk of injury.

USA Hockey: What’s the coolest thing about the Trailblazers?

Margaret Lillard: Well, for one thing, the fact that we’re all still playing! I turn 60 next fall and, though I have to stay off the ice until May due to eye surgery, I fully intend to get back between the pipes and play as long as my bones – and my even more worn-out gear – holds out. A bunch of our players will turn 50 this year, as well. I think we have enough for a team at Nationals if USA Hockey ever fields an old ladies’ division.

I also love that we’ve been at this long enough that we have moms and daughters playing together. Chief among them are Michele Goodman, our longest-serving goalie, and her 14-year-old twins, Lily and Maddie. Lily’s a goalie like her mom, and Maddie plays defense. It’s kind of cool to remember them as preemies, then little tykes learning to skate. Now they can blow past most of us. Another mother-daughter set, the Friedas, joined up several years back with two daughters who played well and a mom who was just learning to play, but is now is one of our defensive mainstays.

USA Hockey: How does your relationship with USA Hockey benefit the Trailblazers organization and how would you like to see it grow?

Margaret Lillard: The first serious attempt we made at a summer women’s house league came about thanks to a grant one of our players received from the Carolina Amateur Hockey Association, our USA Hockey regional affiliate. We had so much fun – and maintaining travel teams was becoming so difficult – that we decided to become a house league full-time.

We’ve had individuals who have gone through USA Hockey to become coaches and officials; a Trailblazer teammate and I went together to the DC area to get our Level 4 certification a few years ago. What I’d personally love to do with USA Hockey is develop a curriculum for adult beginners – the people who, like me, may be past the point of being physically elite – but who want to maximize the skills they have and develop their “game smarts” to become viable lifelong players.

USA Hockey: What would you say to those future Trailblazers who might want to give women’s hockey a shot?

Margaret Lillard: Come out any Sunday night from 7:15 to 10:45. Depending on how soon you make it out, I’ll either be the one on the sidelines with an eye patch or in net, screaming, “ATTACK THE PUCK CARRIER!” Hit me up – we’ll have a beer after and see if we’ve got gear that fits you.

NOTE: The North Carolina Trailblazers’ house league is a beginner/intermediate level league for women ages 14 and up to play in a semi-competitive environment. Players are expected to have skated before and have knowledge of the game. For more information, visit here.