Hockey families near and far stepped up following March 3 storm

Hockey, like so many sports, produces moments on the ice that leave lasting memories for so many reasons. There are also many occasions — long drives in the car, late nights in the hotel — off the ice that stick long after those involved leave the game they love.

Once in a while, you get to be part of an amazing moment.

Such is the case with Carter Chamberlain’s family and the Nashville Flyers 16U team.

A powerful tornado ripped through the country music capital in the early hours of March 3, killing at least 25 people and leaving a path of devastation and destruction.

“I was so scared. I thought I was gonna die,” said Chamberlain, a 15-year-old goaltender for the Flyers, a team in the Nashville Youth Hockey League.

Chamberlain had been fast asleep when the weather warning came across his phone and abruptly woke him up. His parents were just settling into bed and were keeping a close eye on the news as the severe storm made its way through central Tennessee.

Shay Chamberlain, 40, Carter’s mom, had an uneasy feeling. Having grown up outside of Minneapolis, she knew what tornado weather was. So she scurried outside to the barn, which is about 40 feet behind the house, and made sure her three horses were secured — something she had never done in 25 years.

As she returned to the house, the weather had turned from “dead calm” to rain. Then, all the electricity went out. She harkened back to when she was 10 years old and living just outside Stillwater, Minnesota, and there was a tornado warning. Shay Chamberlain remembered asking her dad, who worked at a steel mill near a train track, what a tornado sounded like.

“He goes, ‘Shay, do you know what a freight train sounds like when it's coming through and it's not stopping to get loaded?’” she said. “I was like, ‘Oh, yeah, dad.’ ‘So that's what a tornado sounds like. If you hear it coming, you best get out of the way.’”

Shay and husband Chris, 42, decided to get Carter and 17-year-old daughter Savannah dressed. As they made their way downstairs, Chris poked his head out the back patio.

“He goes, ‘What is that sound?’” Shay Chamberlain said. When she went to the back patio and heard the sound, “Every hair on the back of my neck stood up and my blood ran cold.”

It was the sound of a train. It was a tornado.

The family of four scrambled for refuge in the long tuck-under garage, which is set slightly below the ground floor of the house. They huddled on a corner and waited for the tornado to pass. Once they felt it was safe, the parents went out to do an initial survey of the damage. With the electricity out, only the flashes of lightning during the downpour illuminated their property and the immediate neighborhood. The windows were broken in all three vehicles, which were parked outside.

Not seeing any damage to their home that needed immediate attention and with it being pitch black out, the family hunkered down and waited for daylight to come.

When the sun rose, the damage was clear in the morning light. Their house had escaped major damage as a 100-foot tree fell and landed within a foot of the dwelling and in front of the barn, which was intact with the horses safe. However, a look next door revealed half of their home was gone. A picture from inside that house was found more than 100 miles away.

That morning, the hockey team’s group text started checking in to make sure everyone was safe. The Chamberlains, who escaped relatively unscathed while businesses and houses across the city were leveled, were in the most dire position on the team, with no electricity, severe property damage and no usable vehicles — even if there wasn’t another massive tree blocking the driveway.

As the texts came in, Shay and Chris, weighing the financial impact the storm had on their family, had to make the tough decision that Carter couldn’t go to the season-ending tournament in Lansing, Michigan, which was just a few days later. 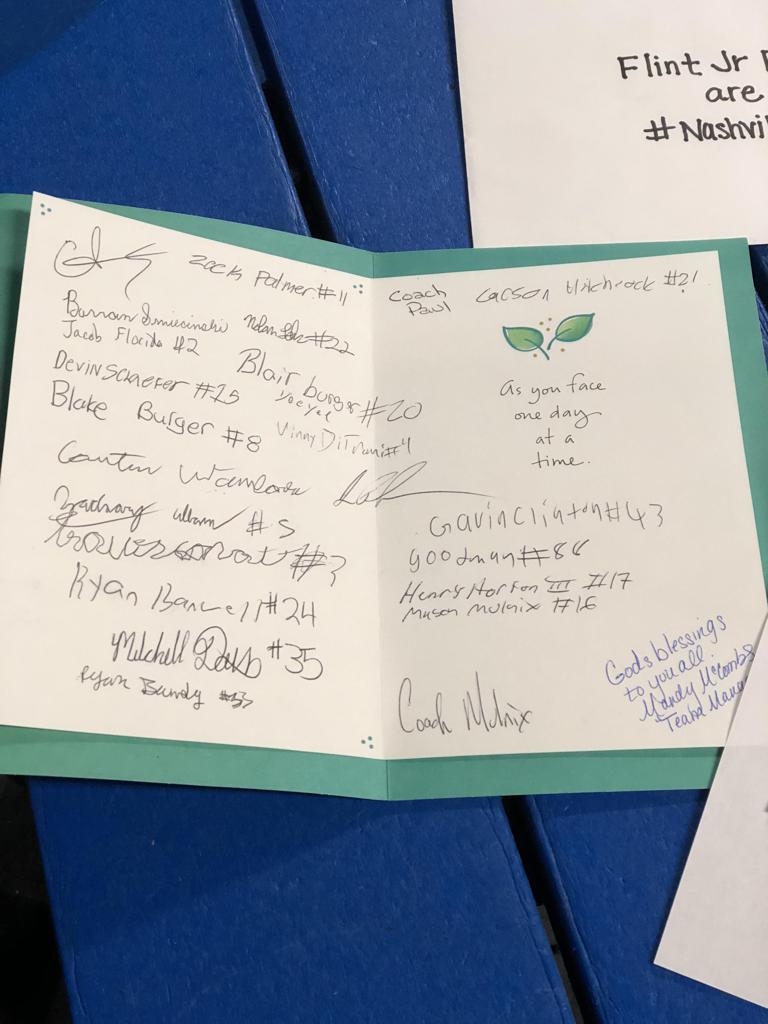 “All of a sudden, the team set up a meal train for us,” Shay Chamberlain said. “They showed up with a generator and a cooler full of water and a pickup truck full of [nonperishable] food and snacks.”

Those gestures alone were more than enough for the Chamberlains, who were relative newcomers to Nashville, having moved to Tennessee about 18 months ago. But the goodwill didn’t stop there. As hockey people tend to do, team parents stepped up and offered to drive Carter and his goalie gear to the tournament nine hours away in Michigan, while also covering his hotel and food.

Carter hitched a ride to Lansing, him in one car, his gear in another. Before the team’s first game against the Flint Jr. Firebirds, having heard about the tornado hitting Nashville, gave the Flyers an envelope with a check for the Nashville Youth Hockey League.

“Our team manager, I know she was very tearful,” said Flyers assistant coach Bradford Winfrey, noting that Flint has been dealing with a severe water crisis in recent years. “A couple other parents were teared up about it. You know, to have another community that's been hit by you know, just some really terrible conditions like that still reaching out and helping another community. I grew up in Detroit. That gives me goosebumps. That's a piece of Michigan that I really appreciate.”

Carter is one of two goalies for the Flyers. His absence would have left the burden of playing four games in three days to the other netminder. He was the backup for the opener against Flint, but started Game 2 against Root River, a Canadian team that was a little too much to handle.

He got one more chance to play, in the third-place game against Flint in the season finale.

It turned out to be a storybook affair. Carter stopped every shot he faced as the Flyers won 6-0. One of the other moms kept Shay Chamberlain updated via text messages as her son notched the shutout.

“[The other parents] really stepped up their game and they were really nice,” Carter said of how he and his family were treated by his team in the immediate aftermath of the tornado and on the road trip. “But basically, I played for my parents in that last game.”

For the Chamberlains, what could have been a tragic event turned out to be one full of tremendous memories.

“I'll tell that story to all my friends I meet when I grow up and continue my hockey career,” Carter said. “It'll be a good story to tell.”