RJ Umberger came from a non-traditional hockey area, becoming the second western Pennsylvania-born player to make it to the NHL, appearing in 778 NHL games with the Philadelphia Flyers and Columbus Blue Jackets. Now, he’s helping kids learn the game in another emerging hockey market, Columbus, Ohio.

Umberger is coaching his son’s 8U team. He also coaches pre-and post 16U and 18U players, who break during the high school season.

“It’s been so rewarding to be involved and to give back. One, seeing your son doing it and seeing kids progress,” Umberger said. “I started with kids when they were 14U and now they are graduating high school. I see how much they develop. It makes you proud and it’s exciting to see where hockey is going, especially here in the Columbus area.” 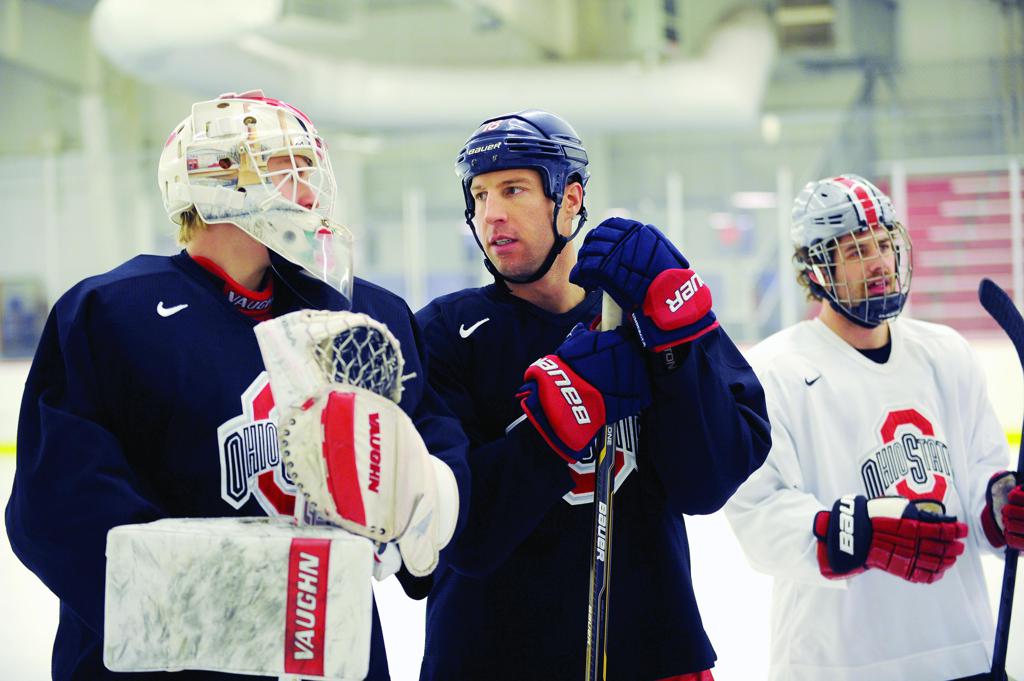 Umberger is well versed with USA Hockey, having played with the National Development Team Program in Ann Arbor, Michigan, before attending Ohio State. The Level 3-Certified coach believes the American Development Model is the best way to get kids to fall in love with the game.

“It’s great having a blueprint for kids’ development across the country,” Umberger said. “It’s for the kids’ best interests to maximize their potential so they can be the best that they can be, while increasing the amount of fun and their level of interest in playing the sport.”

Even though practices look a lot different than when he was growing up, he has quickly embraced ADM principles.

“It’s definitely different than what I did, geez, 30 years ago now,” he said. “We know so much more about the game and what’s best for the kids. You have to be open doing things a little different. It was new to me when I got done playing in the NHL, getting involved with my kids and coaching. You have to educate yourself and learn what’s best for them. When you see the results and the amount of fun they’re having and how involved they are when they’re playing in the game, it just makes sense from so many levels.

“It was easy for myself to adapt to this new way.”

He’s also a proponent of cross-ice hockey for 8U players and thinks it can even be expanded.

“We use that [cross-ice hockey] model and I think it works great. I actually even support it for even higher age groups. I would definitely like to see it more often at 10U,” Umberger said. “For 8U especially, it’s been great seeing these kids improve throughout the year for the last two years. I’ve witnessed it. The smiles on their faces along with their skill and skating has improved tremendously.”

Playing on a smaller surface has had a big impact on their skill progression and overall enjoyment of the game.

“When you make the ice relative to the players, it does a lot of things. It creates more puck touches, more shots on net, more chances to be involved in the play,” Umberger said. “Your kid can come off the ice after a shift excited that they touched the puck and that they were involved and it’s not one kid skating around the full ice because he can skate better than everybody else.”

“It allows them to make more hockey decisions and hockey plays so it increases their development. At the 8U level, it’s the best surface for them, cross-ice hockey.”

When you play in the NHL, you have one goal: winning. However, especially for the younger players, Umberger has his sights set on another target: fun.

“It’s important to look at the big picture and realize what’s most important and that is, one, like I keep saying, the kids having fun. That is ultimately the most important thing. Two, the kids developing and improving and enjoying what they’re doing and getting something out of it,” Umberger said.

He said players are unlikely to try hard or look to improve if they’re not interested and not having fun.

“When too much is focused on the winning, you lose a lot of those parts. It can start to not be fun and you start to lose what’s best for the kids in the long run. It’s a fine line,” Umberger said.

However, he thinks that kids should still be competitive and coaches can help foster that sense of competition in practices.

“That is a characteristic – whether it’s on the ice or off the ice – in life is important to learn. For me, my competitiveness had a lot to do with my success,” Umberger said. “I think there are ways to instill that in kids, teach that to kids and get that out of them through practices and small area games – where it’s not about just winning, that’s the competitiveness we’re talking about.”

“Once the season is over, let’s make sure we’re having some fun. One of the ways we do that is by playing a lot of small area games. We divide these kids into groups and encourage the competitiveness among them and challenge them and do different small area games and keep a tally going through the eight weeks,” Umberger said. “The kids have a blast with that – you talk to a few of them afterwards and they almost have more fun with that than playing in their regular season. It’s a blast, the kids get better, improve and have fun doing it.”

He said that learning to play in small areas is crucial at any level, especially if guys are good enough to make it to the NHL.

“It’s part of hockey, it’s a skill of hockey. You need to be able to handle the puck, you need to be able to protect the puck. Things happen really fast out there and they just continue to get faster and faster, players are stronger and more athletic,” he said. “You need to make these decisions in a split second, your development and skills become second nature. Frankly, you need it in the NHL, you can’t survive without the ability to play in tight areas.”

The former NHLer also appreciates what USA Hockey is doing to introduce body contact at all levels and teach it as a skill progression. Hockey is a physical game, so getting kids confident at a younger age is another part of their development.

“It goes into us knowing so much more about the sport. About injuries and concussions and there’s just so much more science behind it that you have to adjust,” Umberger said.

The sport has changed to the point where body contact is more about puck possession than laying a big hit.

“Maybe back in the day it was go out there and make a big hit, but you see it at the NHL level and on down, it’s become a skill, it is a way of puck possession and leads to scoring goals. It’s holding onto the puck and protecting it. It is more about those small little things than making a big hit,” he said. “So, teaching kids at a younger age that it’s a skill and something you can use to be a better player with the puck is important.” 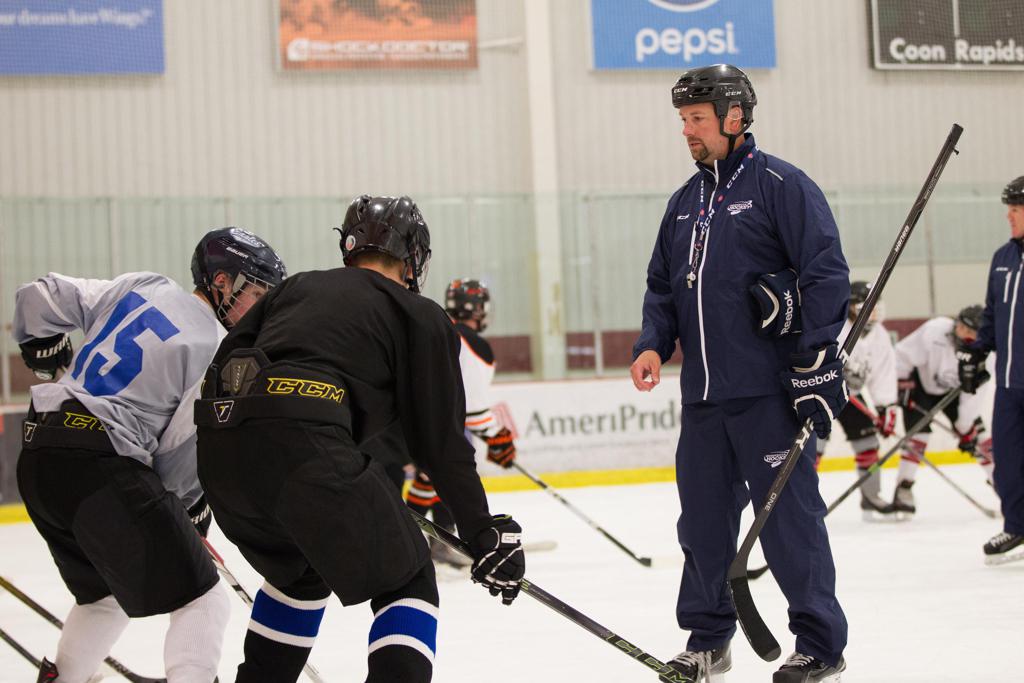 Umberger played both baseball and football in high school. He says playing other sports made him a better athlete and he gained skills that helped on the ice.

“It was important for myself – I experienced it. Other sports helped me overall to become an athlete. I know when I played baseball, catching ground ball after ground ball and hitting balls made me stickhandle better.”

There are other benefits, too. Kids learn other things that they might not experience on a hockey team.

“I think it’s important for kids to be a kid, have fun, make other relationships, try other things and just enjoy sports in general and learn different things from other sports. In the end, if you do choose hockey down the road, it will make you a better hockey player.”

Overall, Umberger thinks hockey in the states is in a good place, but he thinks people need to keep perspective when it comes to their development. It’s okay to hang up the skates when the season ends for other endeavors.

“There’s a sense of feeling like, if we’re not doing what you’re doing, we’re a step behind. There’s a culture of trying to keep up with each other,” Umberger said. “Instead of comparing everybody to each other, take a look at your kid and try to find what’s best for them.”