NBC Sports will showcase an all-female crew to broadcast and produce game coverage of the St. Louis Blues and Chicago Blackhawks Sunday on NBCSN, coinciding with International Women’s Day and marking the first NHL game broadcast and produced solely by women in the United States.

Tappen, a reporter and co-host of NBC’s coverage of the NHL, recently shared her thoughts on Sunday’s historic broadcast.

What’s it like for you to be part of the upcoming all-female broadcast to celebrate International Women’s Day?

It’s really a huge honor to be a part of it. I look at the cast that I’m going to be with that day, and I can’t get over it, with Olympic gold medalists and Kate Scott who has done an unbelievable job paving a path in her own way for play-by-play. And then all the women behind the scenes who I’ve had the great joy of working with for so many years, to let them shine as well and give them their moment. I think this is awesome and I’m honored I get to be a little piece of it.

How much does it mean to be part of the first NHL broadcast involving all women?

This is an honor for me, but this is also groundbreaking. I hope that other leagues will take note of what we do on Sunday and start doing it themselves. I know that it’s been done on Amazon with Hannah Storm and Andrea Kremer and they’ve done an unbelievable job on the digital side, but this is for network broadcast. There’s no reason why this can’t happen many times going forward. I’m excited to see the finished product. Everyone has been working so hard behind the scenes to make sure that Sunday is going to go off without a hitch.

What does International Women’s Day mean to you?

International Women’s Day to me is a time to reflect on the great women in history who have done unbelievable things to make sure that we can be where we are right now. Not only the people that are famous that we hear about, but also our own mothers and our grandmothers and our best friends that cheer us on. I have an incredible support system of men and women who empowered me to be where I am today.

This Sunday March 8, join us at 7pmET! I’m proud to be part of an All-Female crew to broadcast and produce @NBCSports coverage of the Stanley Cup Champ @StLouisBlues - @NHLBlackhawks game in honor of International Women’s Day!!! The studio, the truck, the faces- ALL WOMEN!!! pic.twitter.com/q1OF8904bS

How did you get started in broadcasting? What was the inspiration or motivation for choosing your career path?

I knew when I was little. I would watch football games with my dad on Sunday’s and we would go to Major League Baseball games together for Father’s Day. We would always watch sports together, and I played sports. Growing up, my mom also had the “Today” show on every single morning and Katie Couric to me was just untouchable. I was fixated to the TV. I participated in an extracurricular class growing up called forensics, which was public speaking. I just loved speaking, I loved being in front of people and communicating with people. I had a passion at a very young age.

It’s one thing to have a passion, it’s another thing to know what it all entails and to execute it. I graduated from Rutgers with a degree in journalism and political science and an athletic background and I just busted my butt to try and find my first TV job. I won an audition in New York City at what was then College Sports TV — it is now CBS College Sports — and I started to get reps there. But I was also living at home and working part-time at a running store and fitting people for sneakers when all I wanted to do was get into television. I had the resources to put together a nice little 2-to-3-minute resume reel, sent it out to all of the stations in the country and in January 2005, I was hired as the weekend sports anchor and weekday reporter in Providence, Rhode Island. That’s what I consider my first meat and potatoes job in TV. 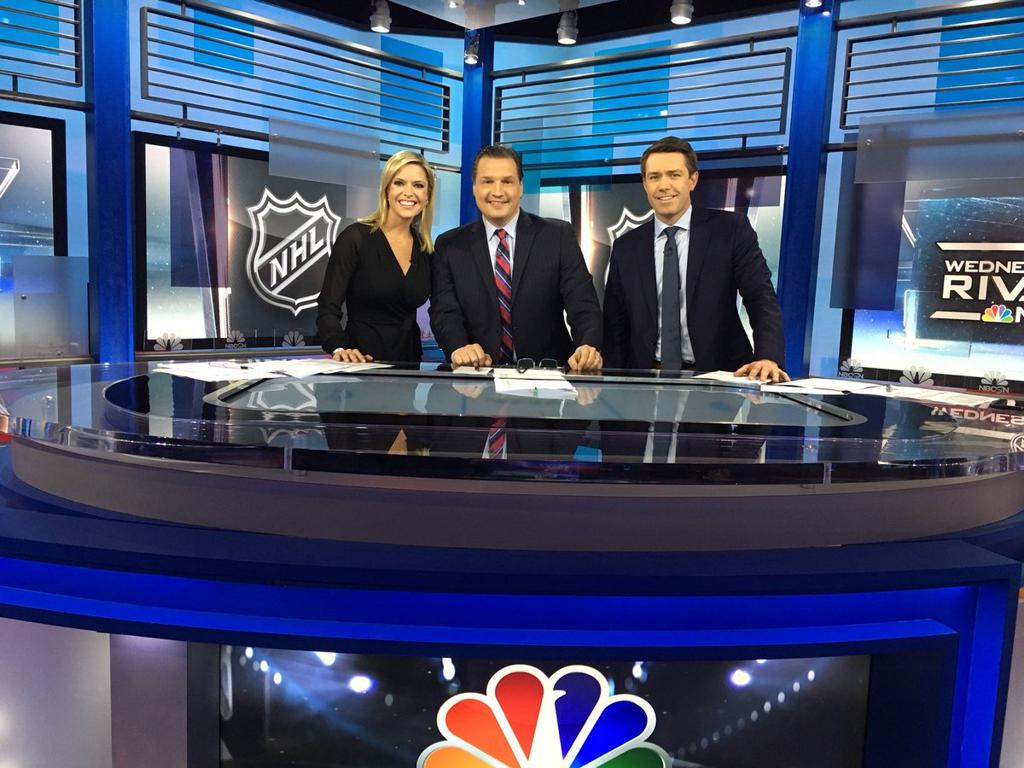 What advice would you give girls or young women looking to follow in your footsteps?

I find it so important to pay it forward. I’m certainly a champion for everyone that works hard to achieve their dreams. I would say one of the biggest pieces of advice I give is to do what you love. If you really have a passion for something, you’re going to succeed, you’re never going to feel like you work a day in your life, and you’re going to be happy. I’m living my dream every single day and I don’t take it for granted. I also think that class always wins. Holding yourself with integrity, holding yourself with dignity, holding yourself accountable and putting in the hard work, while being a classy individual the whole time is really worth it because it sets you apart.

From your perspective, what role does having female broadcast talent play in growing the game across the U.S.?

I think it’s huge, but it’s more than just showing up and being the female face on television. I think it’s the fact that they are as qualified as any male that is going to sit in that role. They work just as hard and they know the game just as well as anybody else. It’s not just any female in these positions, you’re putting in Olympic champions, gold medalists, women who have played hundreds of games and paved the way for women who come after them. Having them in there is incredible credibility. The resume behind each one of these broadcasters and everyone behind the scenes on Sunday is just as good as anyone else in any other sport in the country.

Have you seen a difference in the growth of the women’s game since the U.S. won the Olympic gold medal in 2018?

I always used the 2018 gold-medal game as a real turning point for women in hockey. I didn’t really see the full morphing of women in hockey until 2018 when the U.S. won gold in South Korea. What those women achieved was the best of the best, but what they did after they achieved that gold medal was even bigger. They went around the country for the next year promoting the game. They were so visible and they were all so attainable. It’s one thing to be visible, but they were also going into communities and meeting one-on-one with girls’ hockey programs. They didn’t just walk the walk, they backed it up, big time.

Do you have a favorite moment or event that you covered in your career? Why does it stand out?

It’s so hard to pick. I love the big events. There is so much excitement around the Stanley Cup Final. I don’t think there’s a greater trophy in sports than the Stanley Cup. Also the Olympics. I think back to my very first Olympics in 2014 in Sochi and my whole life I thought if I can broadcast and Olympic game, that would be so cool. As a little girl I was glued to the television with particularly the Winter Olympics, they were my favorite, but the Summer Olympics, too. To be able to broadcast for NBC in Sochi in 2014 in my very first Olympics, I will never ever forget that. I kept a journal and I was writing home quite frequently to family and friends. That to me was one of the biggest moments of my career.