Representing the big tech company, players don’t always see each other in the office.

When Henry Majoros landed a job at LinkedIn as a software engineer a few years back, he knew life would be different.

He had to make the long move from just north of Detroit to Silicon Valley. Growing up in Michigan, Majoros played hockey quite a bit. When he packed to head to northern California, he didn’t bother grabbing his hockey gear.

“I figured, when am I ever going to play hockey?” Majoros said.

One of his first days at LinkedIn, a popular social network for professionals, Majoros mentioned to some co-workers that one of his hobbies was playing hockey. One of his colleagues responded that she knew the captain of the LinkedIn hockey team and could put Majoros in touch with him.

Majoros was in luck. He quickly joined the hockey team, which plays in the San Jose Adult Hockey League.

The LinkedIn hockey team had plenty of success and won a few league championships, so a second LinkedIn team — LinkedIn Premium — was added shortly after Majoros came aboard. The Premium team is comprised of more advanced hockey players.

“It’s nice to just get out to the hockey rink and play with your friends,” said LinkedIn Premium team captain Steve Holsapple, who has played on the LinkedIn teams for seven years. “The team has really developed a lot of friendships, so it’s more like friends than co-workers.”

Majoros has a great time playing on the team. One big reason is because it’s a fun group of men on and off the ice. 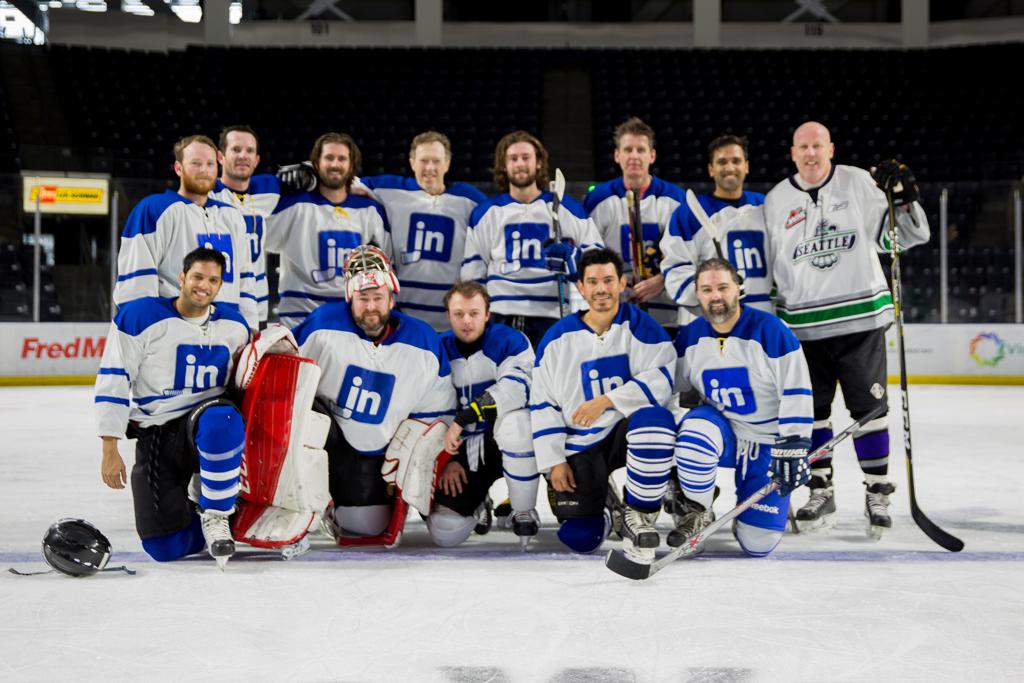 “Just an awesome group of guys,” Majoros said. “I’ve gotten to know them a lot over the last two years and it’s really cool that if people leave LinkedIn, they’re still looking to play on the team. So, we’ve got a good mix of alumni, people that have retired and move onto other jobs.”

There’s a broad range of ages on the LinkedIn Premium hockey team. It consists of guys in their early 20s just out of college to nearly retirement age in their 50s and 60s. Some players are working in the first job of their career while others are senior directors of divisions.

“I think it’s pretty sweet,” said Majoros, who is 24 years old. “Regardless of age or what you do in the company, too, we’ve got a great community. There are guys who are old-timers and they’re sheer fundamentals and have been playing for 40 years. They’re fun to play with. I think it’s awesome.”

Holsapple, a 30-year-old software engineer, enjoys building camaraderie on the ice with his teammates. That connection certainly helps in the workplace.

“The team is kind of diverse enough in what we do that we don’t always see each other,” Holsapple said. “LinkedIn is a big company, so we don’t all directly work together. But when we do see each other in the lunch room or around the office, it’s fun.

“The most challenging part is remembering people’s real names when you see them at work instead of using their nickname.”

Majoros loves having the backing of the LinkedIn teams from some of the top brass at the company.

“We actually had a few guys, they may not play with us anymore because they’re kind of higher up in the company as VPs or executive level guys — they don’t come to the games really but they used to play on the team and know it’s an awesome part of the company, Majoros said.

The guys have a lot of pride playing for LinkedIn. With the original LinkedIn team winning a few championships, the players continue to be competitive and want to win more hardware. That makes for some healthy rivalries within the league.

“It’s cool when you go out and play another tech company, especially since it’s so big in the area, everybody always makes jokes about us,” Majoros said. “We chirp each other for the website that we work on. We always joke that we’re going to give guys LinkedIn Premium after we beat them.”

LinkedIn helps fund the hockey teams and allows the players to travel to tournaments a couple times per year. The group went to Lake Tahoe last year. Microsoft, which is the parent company of LinkedIn, invites the LinkedIn teams to play in its annual tournament in the Seattle. The guys have jumped at that opportunity.

“It’s a real tight-knit group of people right now,” Holsapple said. “It’s a blast playing for LinkedIn. I really appreciate LinkedIn helping us put this together.”