Today (Feb. 19) is “Salute to Officials” Day as part of Hockey Week Across America, and one of USA Hockey’s initiatives over the past several years has been to collaborate with American National Hockey League teams using the “Meet the NHL Officials” program.

Younger, grassroots-level officials are invited to games in different cities to meet the NHL officials. Each officials then has a chance to talk to them before the game, ask questions and learn about what it took for the big-leaguers to make it to the NHL as an official. 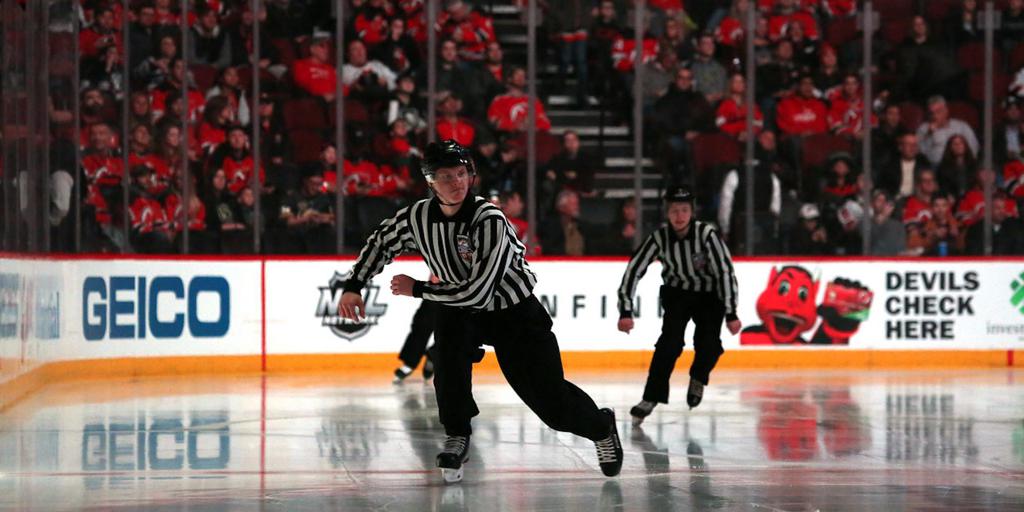 Numerous past participants of the program have benefited from the experience, taking those lessons to heart and continuing to progress up the officiating ladder.

For Erika Greenen, getting to meet up with referees Chris Rooney and Frederick L’Ecuyer and linesmen Devin Berg and Jonny Murray in Nashville in 2016, during her second year of officiating, was an eye-opening experience and just another step on her journey towards high-level officiating.

“I guess it was different because I was 26 at the time, so it was different from a kid going in,” said Greenen, who decided to take up officiating after concluding her playing career at the University of Wisconsin-Stevens Point. “Just to see that exposure of, ‘This is what these guys have worked for,’ and hear their stories of how they got there and what it took to get there, and what their schedules and every day looks like as an NHL official, was really cool.”

Greenen attended USA Hockey’s Futures Camp in the summer of 2016 and has gradually upgraded her assignments since then. She is currently working a lot of youth games in the Chicago area, as well as some women’s NCAA Division III contests, ACHA college games and even some National Women’s Hockey League outings. She is on the International Ice Hockey Federation list and worked the 2019 World University Games in Russia and will be officiating the Division IIA World Championships in Spain in March. 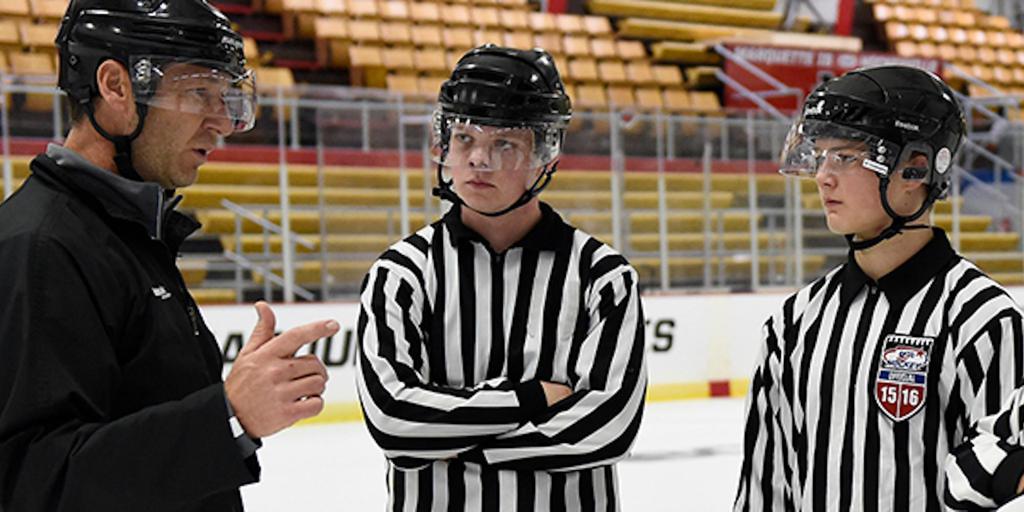 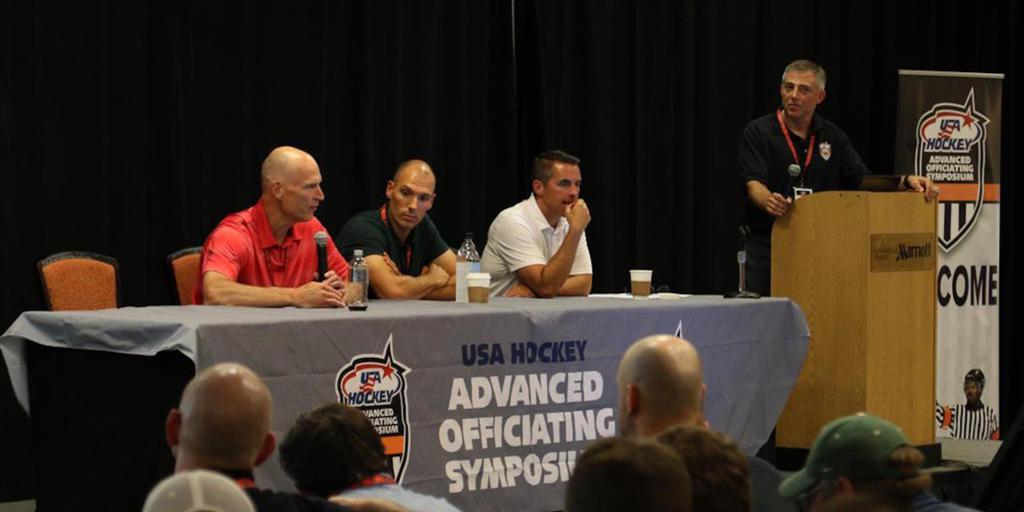 But perhaps the most prestigious assignment she’s had was the finale of the 2019-20 Rivalry Series women’s game between the U.S. and Canada in Anaheim, California, on Feb. 8 in front of a U.S.-record crowd of 13,320.

“That was a really cool experience,” Greenen said. “It was a fun game, it was loud in there. It was cool to see just how many fans were there.”

Andrew Bell has had a similar career trajectory since participating in the “Meet the Officials” program in New Jersey, actually getting the opportunity to do it twice, in 2017 and again in 2018.

“From my understanding, a lot of places around the NHL don’t allow you to skate on the ice with the NHL officials and both times, I was able to do that, so that in itself was pretty interesting,” said Bell, who is just 19. “But just to have the sit-down time with one of your peers, because they send us in pairs, and to have time with professionals to hear their stories, and just the way they handled themselves, it was just an interesting experience.”

In 2017, Bell met with referees Francois St. Laurent and Kyle Rehman and linesmen Greg Devorski and Ryan Galloway. Then in 2018, he met refs T.J. Luxmore and Tom Chmielewski, and linesmen Libor Suchanek and Brian Murphy.

“Obviously, you watch these guys on TV every night, but being able to spend time with them, hear their point of view on certain things, it kind of reminds you that they’re all humans,” said Bell, who started officiating at 13, but is unusual in that he didn’t play hockey first. “Even though they’re on TV, they’re still human, they still went up through the ranks as I’m doing now.”

“This year has kind of been a breakout year, but I love being on the ice and I love officiating,” he said. “So it was easy for me to want to work those games and get better.”

For any young officials about to get their chance to participate in the program this season, Greenen has some advice.

“I would say, make sure you have some questions written before, because probably once you get there, you might forget them,” she said. “So go in with some questions and nothing’s stupid, ever. They’ve all been there, they had to start somewhere. Just take in what they have to say and kind of apply it to your games.”

And the connections they make through the program really might endure. Greenen crossed paths with Rooney again last summer at the Advanced Officiating Symposium in Minnesota. He was one of the speakers at the symposium and she got to talk to him again a little bit afterwards.

And Bell ended up connecting again with Murphy, who was an instructor last summer at a USA Hockey officiating camp, and the two have since forged an ongoing friendship.

“He remembered me from the time that we met through this program,” Bell said. “Since that camp, I’ve kept in touch with him and quite a few times since then, I’ve reached out to him to seek advice and sometimes just check in and say, ‘Hello.’ He’s one of the best mentors and people that I’ve met in the hockey world.

The opportunities are there for young officials to quickly climb the ladder and both Greenen and Bell have done well since participating in the “Meet the Officials” program.

“I remember going to my first seminar and being told that if this is something you want to do, you can make a future, you can go far with this,” Greenen said. “I was just here to get back in the game. I never thought I’d be where I am, but I definitely couldn’t have gotten here without the help of my supervisors, people in the Southeast District. A lot of people go behind helping me get there.

“We’ll see where it goes. It’s definitely been a lot of hard work, not only getting to see that success, but just building friendships. I have friends all across the country from reffing now, which is really cool.”