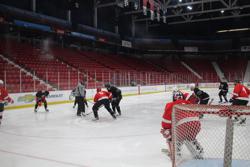 We’ve all been there. Pent up in the defensive zone, coasting in circles while the opposing team moves the puck with ease. They’re generating scoring chance after scoring chance.

You, and all your linemates, are completely gassed. Attempts to alleviate pressure and clear the zone are futile. Goal.

How can you break the cycle and get momentum back in your favor? Buckle down on team defense and regain possession with these five tips.

Take shorter shifts: You showed up to play hockey, not sit on the bench. But shorter, high-energy shifts are much more effective. When you’re tired, get off, and let some fresh legs on to keep intensity up. Opponents feast on coasters who don’t get off the ice, don’t backcheck hard and get stuck in their own end. Hold yourself and teammates accountable. It just takes one player to stay out for five minutes and the bench starts getting cold and angry, and then others will stay out longer, too. Make short shifts contagious and you’ll play better hockey and win more battles.

Communicate: Let’s hear some chatter out there. Are you open for an outlet pass? Should the goalie freeze the puck? Who’s got who in an odd-man rush? Alert your teammates of back pressure. Call for a cycle or a D-to-D pass – don’t assume teammates see you. Goaltenders should be vocal as well. The more chatter on the ice, the better a team is generally performing. Teams who communicate are more cohesive and resilient.

Puck smart: Develop a puck-possessive mentality. Be deliberate with decision-making when handling the puck everywhere – in all three zones – of the ice. Do you have to try and force a pass through traffic? Is a bad-angle shot worth it if it misses the net? Or can you pivot, protect the puck, and create more time and space in a soft area? If you must dump it in, do so strategically to allow teammates a chance to reach the loose puck first and retain possession. Carrying the puck into the offensive zone with no support? Try to curl away from defenders, throttle your speed, power down into the corners, or even retreat and regroup until you have numbers again. Watch 3-on-3 NHL overtime games and you get an immediate sense of how important puck possession is.

Active sticks: Use your sticks with a purpose. Force the other team to react to your stick pressure – take a good angle and try to jar the puck loose. Disrupt passing lanes and take away their time and space. Be ready to tie up opposing players in front of the net. If you’re not near the puck, look around, find a body and get in a good defensive position. Lift their sticks so they can’t catch passes or shoot. Just be careful not to get a stick penalty.

Backcheck: It’s not what hockey players dream about, but it is an absolutely crucial component of winning hockey teams. Chasing down an opponent and stripping them of the puck or intercepting a pass can be very satisfying and it will get teammates howling. Lead by example. More players will want to backcheck when they see you putting the work in and creating turnovers. Give your teammates a stick tap for busting their tails back after a bad turnover.

Just remember, it’s way more fun to play with the puck than without. Committing to solid defensive play and smart puck possession will help you win more games.