Location, location, location may be a big deal in the world of real estate, but for the 2,000 adult players who came to Wisconsin’s north woods for the 2020 Labatt Blue/USA Hockey Pond Hockey Championships, it really didn’t matter.

For the second time in the 15-year history of the event, uncertain ice conditions forced organizers to relocate away from its typical picturesque setting on the shores of Dollar Lake to a more practical location in the famous World Championship Derby Complex. 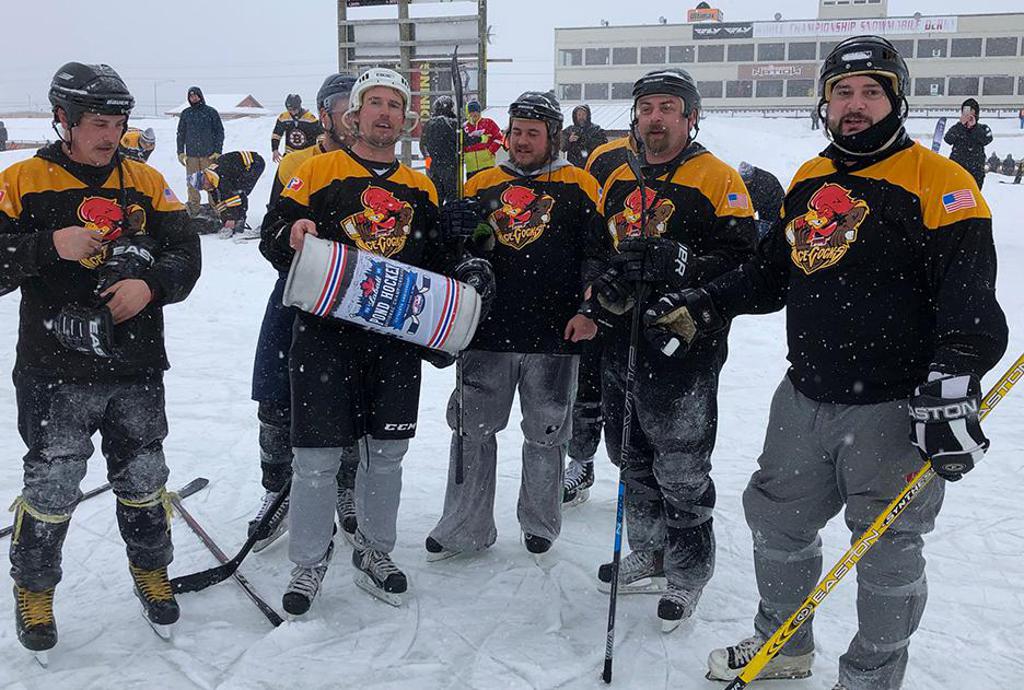 The change could not damper the enthusiasm of the players who came early, stayed late and had a great time playing Cornhole games, listening to a live band, swapping old pond hockey stories and making new ones as they enjoyed beverages provided by the tournament sponsor.

While the setting was maybe not as scenic as being on the tree-lined lake, the quality of the ice on the slightly smaller rinks was a big hit. Players offered a big stick tap to the ice crew that spent the week pushing mountains of snow around the sprawling snowmobile track and adjacent grounds to create the 24 rinks that housed 267 games over the course of the weekend.

“The ice was awesome,” said Chelsea Gouette, whose Four Lokos took home the title in the Women’s Silver division for third time. “The lake is the lake. It’s such a special setting. But just coming up here and being around so many awesome people, it doesn’t really matter where they hold it.”

With the snow falling and the temperatures hovering in the single digits on Sunday morning, it was the perfect backdrop as tournament wrapped up with 19 teams skating away with championship trophies.

Like most veteran pond hockey players, Nick Akers of the Press Box said dealing with the elements is part of the fun. As the snow built up on the ice, players had to improvise to move the puck.

“The conditions, with the snow flying and building up in the ice, weren’t ideal but it was the same for everyone,” said Akers after he and his teammates posed for their championship photos after capturing the Silver 30+ title.

“I’ve been the past few years out on Dollar Lake. Some things are better on the pond but this is a great atmosphere. We had some friends who drove up from Milwaukee and I don’t think they would’ve hung around as long as they did if this was out on the pond. The atmosphere here was a lot of fun.”

This year’s list of title holders included a number of repeat winners along with a few first-time winners champions. Winning is never easy at any level of play, but the veteran teams have learned a few tricks along the way.

For Michelle Greeneway and her Ponies on Zambronis teammates, the secret to winning their second Women’s Gold division title in the past three years is learning to deal with the twists and turns of playing outdoors.

“You can be the most skilled team but not be good in pond hockey,” said Greeneway, who along with her teammates all played college hockey in their home state of Michigan.

“You have to adjust your strategy because it’s a different type of game when it comes to moving the puck and making shorter passes to deal with the ice conditions. Even knowing how to substitute players is different.”

As the action wound down and champions gathered to receive their spoils of victory, some quickly packed their cars looking to beat some of the heaviest bands of snow on their way out of town. Others lingered until the bitter end, looking to wring every last second of fun out the weekend.

For Nate Boychuck of the Poppin Tarts, the champions of the Bronze 21+ division, the six-hour drive back to Chicago would be a little easier with a championship trophy in tow.

“It won’t be a bad trip because we’ll be rocking all the way home,” he said.

“It’s always a great time being here, drinking beer, playing hockey and having fun. We’ll definitely be back next year.”