In lesson to players on recognizing hockey role models, Appert’s youth coach joined him on the bench in Minneapolis

MINNEAPOLIS — Seth Appert grew up in a baseball family, spending summers together on the diamond in Cottage Grove, Minnesota. Seth became drawn to another sport, developing a love of hockey.

The attraction to hockey grew into a lifetime in the sport and spurred a career that has seen Appert play and coach at the college level, and eventually led to him becoming a coach with USA Hockey’s National Team Development Program in Michigan.

Through it all, Appert often reflected back on one person who helped foster his passion for hockey.

“When I give talks to youth hockey coaches, I talk about the importance of instilling love of the game, and passion, and wanting these kids to keep playing the game; how much fun is important,” Appert said. “It can’t just be about wins and losses. I tell the story of my first travel hockey coach, Al Palodichuk, and what he meant to me. I was coming from a non-hockey family and he taught me love of the game, respect for the game, passion for the game of hockey. I told that story enough over the years and I started thinking, ‘Man, I should probably call him, and thank him and tell him that.’”

The idea grew into an initiative for Appert. He wants his players to reach out to someone in their journey through hockey that has positively affected their love of the game and personal development. First up was Appert himself and Palodichuk, who first started coaching a 9-year-old Appert in squirts.

Back in Minnesota on Friday, Appert asked his former coach to join him behind the bench as Appert’s U.S. National Under-18 Team faced the University of Minnesota for a game.

“Quite an honor the boy bestowed on me,” Palodichuk said. “First of all, your jaw kind of drops because you can’t believe that someone like Seth would be coming back to you so many years later with an offer like that, from the position he’s in. For him to do that and bestow that kind of honor on me is unbelievable. It’s hard to fathom how deep the threads of hockey run and how small the hockey community really is.”

The Palodichuk’s and Appert’s were family friends. Al would hunt and fish with Seth’s father. Al also coached Seth’s brothers. The connection between Al and Seth has been enduring, in part because of hockey. The two keep in close contact but Seth wanted Al to know how much he was appreciated. 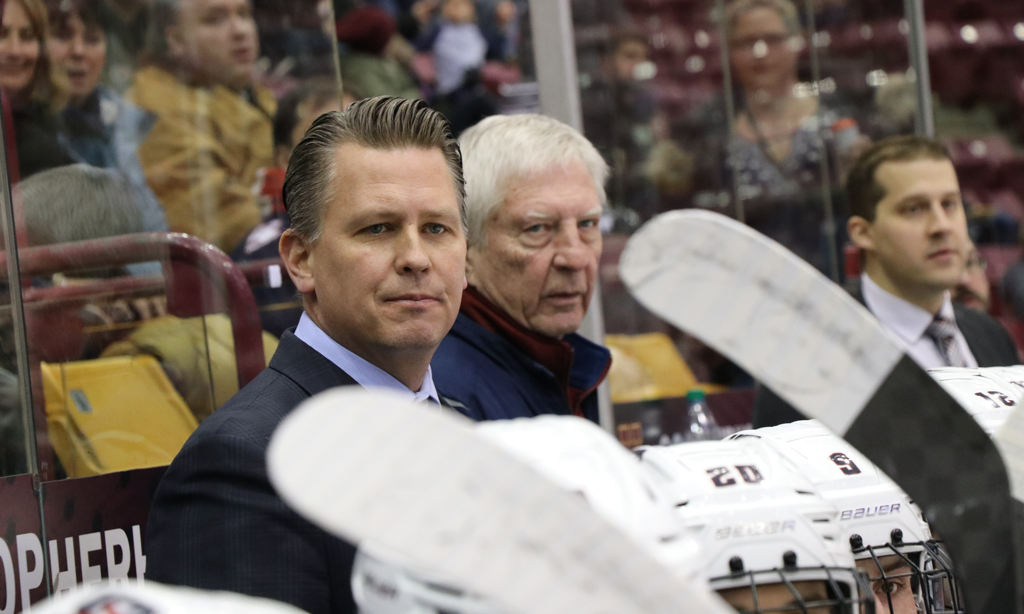 “Certainly his competitiveness, his passion and his love of the game, and how much he tried to share that with us,” Appert said of how Palodichuk influenced him. “I think he and I are kind of cut from the same cloth. So, we were wired similarly in terms of we’re both competitors. We both really like to compete and like to test ourselves, and we both love being part of something bigger than ourselves. That’s the beauty of getting to be on a team, you get to be a part of something bigger than yourself.”

Palodichuk could see the competitiveness in Appert early on. After coaching Appert as a 9- and 10-year-old, Palodichuk later became Appert’s high school coach.

“The guy was a real bulldog as a goaltender and an extreme competitor,” Palodichuk said. “Seth was the type of kid, even at a young age like 9 and 10, that you could just tell it was his passion. He literally loved the game and he would sacrifice whatever he had to do to become better and help his team win.”

For Appert, coaching now is about more than wins and losses. This week, he approached his team with the idea of reaching out to former influences. Appert believes his players might receive as much from the phone call as those who they are showing appreciation for. Appert plans to have his players share their experiences with each other.

“Sports are way more about life lessons, and relationships, and friendships and love of the game, whatever it is you choose, than it is about trying to get a scholarship, or play pro or whatever that is,” Appert said. “Those are lessons I learned from Al. I don’t remember a ton of hockey things, specific hockey instruction, from him, but I do remember what he meant to my life and I do remember that he helped instill this fire and passion that I have for the sport of hockey.”

Appert sent Palodichuk a text message in December asking his former coach to join him behind the bench. Palodichuk said he didn’t believe Appert at first. He thought it was a joke. It was no joke. Palodichuk made an impact on Appert’s life and now it was time to repay the favor.

Palodichuk spent the day with the team, which later beat Minnesota, 2-1.

“It’s just a tremendous experience for me to sit back and watch Seth coach these young men that have put so much into the game, and just kind of reflect on all the things I tried to teach and listen to how Seth communicates with his guys,” Palodichuk said. “It’s like having another son that you’re so proud of. I guess that’s the best way I can put it.”