July 17, 2019 will forever be remembered as a life-changing day to those involved with the Watertown Youth Hockey Association (WYHA).

The organization in west central Connecticut had one of its longtime hockey players, Tyler Palmer, pass away in a non-hockey related accident. But what has transpired since that sad summer day has been truly positive for everyone involved within the close-knit hockey community.

“When Tyler passed away and we started to work on the memorial, that’s where we want to leave a legacy in his name,” Silverman said. “That’s where having the free learn-to-skate being funded by that memorial fund sort of came from.”

The WYHA wanted to find a way to honor Tyler’s memory after playing more than six years with the association. With guidance from Tyler’s parents, Steve and Mandi, the Tyler Palmer Memorial Fund was created in August.

“It definitely gave us that extra focus to get it out everywhere, because of the cause,” said Steve Silverman, WYHA director of girls’ hockey. “The kid loved hockey, and now all of a sudden we’re introducing people to the sport that he loved.”

Tyler began playing hockey in 2013 after signing up for learn-to-skate sessions through the WYHA. Mixed with a passion for racing go-karts, Tyler played goalie because of the competitive nature of the position and challenges involved.

“He loved the satisfaction of being the last line of defense,” said Mandi Palmer, Tyler’s mother.

Tyler, who had just graduated from Swift Middle School in Oakville, Connecticut, was also a kid who loved riding all-terrain vehicles and snowmobiles in his free time.

“He loved every minute of it,” Mandi said. “He loved to ride every day. He worked on a farm right near us and rode his ATV there every day. It’s tough to have it happen that way.”

Just five days after his 14th birthday, Tyler was at a friend’s house with his dad cleaning up trails on their ATVs. With his dad a distance away, it’s unclear what happened, but Tyler’s ATV tipped over and crushed him, said his mom.

It was devastating news for the community and Tyler’s hockey brethren.

“His squirt A year they actually went to sectionals and won that up in New Hampshire, and that group of kids has stayed very tight,” Mandi said. “The devastating blow there was just huge. It impacted kids even that looked up to him that we didn’t even know, necessarily, or spoke to all the time. We had kids themselves reach out to us, which is heartbreaking to know that he touched them as well, and that he was a role model for them being on the ice and they really looked up to him.”

There has been an outpouring of support for the Tyler Palmer Memorial Fund where different events will be raising money. Its biggest fundraiser to date took place on Dec. 21, which was proclaimed Tyler Palmer Day. The Boston Bruins alumni played the Watertown youth hockey coaches and players in a fundraising game, raising about $25,000. The game, along with individual donations, 50/50 raffles and other activities, will fund the WYHA’s learn-to-skate program for years to come, Steve Silverman said. 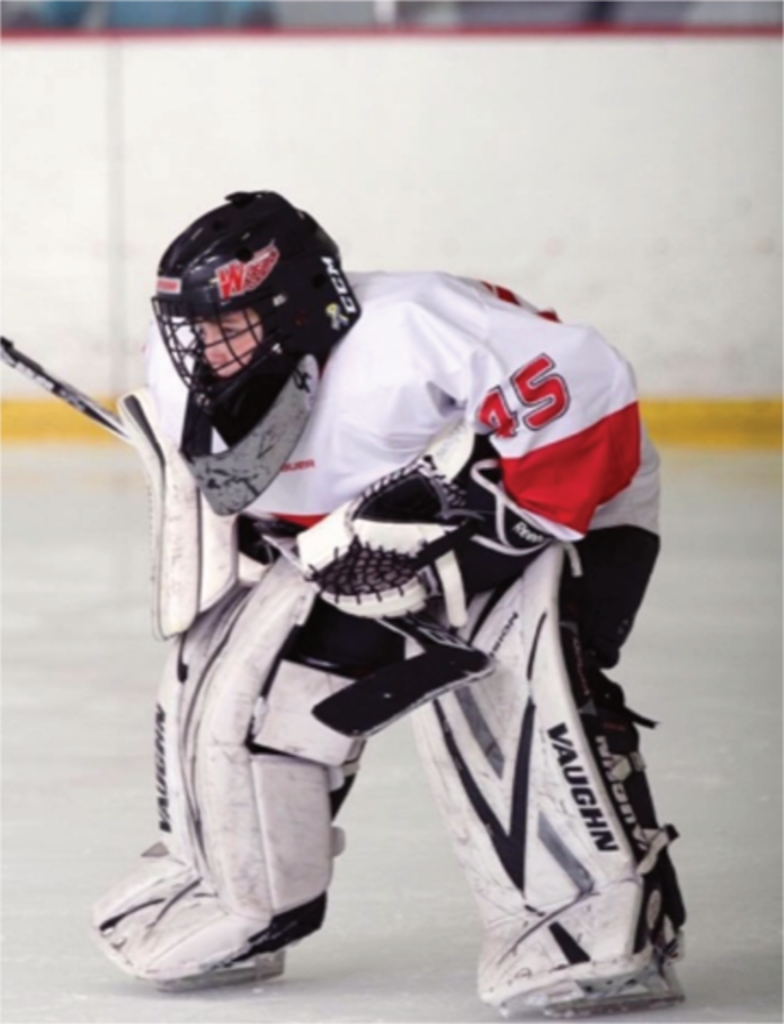 “As long as I’ve been here, we’ve never seen anything quite so sad as that, and this will keep his memory alive,” Erickson said. “It will keep kids in our system and basically teaching them the game that Tyler loved so much.”

Steve and Mandi Palmer were able to attend a few of the most recent WYHA’s learn-to-skate sessions to see the kids, talk with parents and witness first-hand the effect of having the memorial fund in their son’s name. It’s been therapeutic to continue being “hockey parents,” Mandi said.

Tyler will always be a big part of the WYHA. There’s a constant reminder of his legacy as the players in the association wear helmet stickers with Tyler’s No. 45 on it.

But that isn’t the only way Tyler is being remembered. During a ceremony following the Bruins alumni game, the association retired Tyler’s number. There will never be another WYHA player to wear 45.

“That was amazing for us,” Mandi said. “It was something that was unexpected, and to me it goes to show how much Ty influenced and impacted people in the organization.”

The WYHA, which was founded in 1954, has been growing by leaps and bounds in recent years. The association, along with the Palmer family, hope Tyler’s legacy will continue to help the growth as more kids are introduced to the sport he loved.

“It’s heartwarming, and it’s bittersweet as well,” Mandi Palmer said. “We can continue Tyler’s legacy and love for hockey and watch other kids grow because of that, which is amazing to us.”

Right before Christmas, the WYHA wrapped up an eight-session, learn-to-skate program that hosted 160 kids.

“From tragedy, the Watertown community has rallied around Tyler and his family,” said Graham Gill, the women’s/girls’ director for the Connecticut Hockey Conference. “The number of kids who have shown up at the learn-to-skate/learn-to-play clinics is a testament to carrying on Tyler’s love of the game. It is amazing to see all the young girls and boys showing up every week. Watertown has quickly joined the small handful of programs in the state that has a home for young female players from learn-to-skate to 19-and-under.”

Of those 160 kids taking part in the learn-to-skate, about 50 were girls. Five years ago, girls participating in the WYHA was almost unheard of. During the 2015-16 season, the association had just 14 girls’ players and didn’t offer any all-girls teams. The following year, the Connecticut Jr. Eagles Tier I 19U team was formed. The very next season, 2017-18, a Tier I 16U team was added.

The last two years, the WYHA has put together recreational girls’ teams at the 10U, 12U and 14U age levels.

“It grew faster than we thought,” Silverman said. “You see a lot of girls that have never put on skates before that have gone through our learn-to-skate program and [after] have said, ‘Hey, I want a hockey stick. I want equipment. I want to learn to play hockey.’”

Gretchen Silverman, a member of the 1998 U.S. Women’s Hockey Team that captured Olympic gold and current Taft School girls’ hockey coach, is able to look back at her own youth hockey experience in Connecticut and see the progress made in recent years.

“Growing up as a young girl playing youth hockey in Connecticut, I only encountered one other girl player in the state before I was 12 years old,” said Silverman. “To see Watertown Youth Hockey and the Connecticut Jr. Eagles embrace growing the game, especially for girls is something to be proud of. I am glad to serve as a role model for local girls to dream of a future in our great sport of hockey.”

There are now over 130 registered girls’ players in the association. Just this year, 100 boys have been added to the WYHA through the learn-to-skate and learn-to-play programs.