So, when Dick Foster earned the award in 1994, the longtime hockey volunteer was honored beyond belief. But he didn’t retire from volunteering at that point. Not by a long shot.

“Then he decides to stick around another quarter century,” said Glenn Hefferan, president of the Atlantic Amateur Hockey Association. “Dick would joke about that, ‘I’m working on my second lifetime achievement award.’”

Foster liked to joke around, but he was always serious when it came to hockey. He was a volunteer up until the day he passed away, Nov. 2, in Manahawkin, New Jersey. The 87-year-old logged nearly 50 years of volunteering for hockey organizations on the East Coast as well as with USA Hockey.

“Unheard of,” said Gene Palecco commissioner of the Atlantic Youth Hockey League. “I know I can’t do it. I have 20 years in and to think I’d have another 30, I’d be 80. I probably won’t live that long.”

Foster’s list of hockey duties over the years is quite impressive. He served as the Atlantic Amateur Hockey Association vice president from the mid-1970s until 1992 and then was a director emeritus. In 1992, Foster was named to the USA Hockey Junior Council where he spent 25 years. He was Atlantic Metropolitan Hockey League commissioner from 1990 until the day he died.

Foster had his biggest honor bestowed on him in January 2018 when he received the Dr. John McMullen Award, which is given by the New Jersey Devils for those who support amateur hockey throughout the state. Foster was one of three recipients that day along with former AAHA President Jim Plunkett.

“It was an honor to be able to do that with him,” Plunkett said.

Said Hefferan: “That was an incredible day. I know it meant the world to him. I watched him cry.”

Those who knew Foster well describe him a mentor in every sense of the word. He was also someone who would do all the behind-the-scenes work and not look for any recognition.

“He was a big-hearted, big brother, elderly statesman kind of guy,” Plunkett said. “At the same time, he was fun. He had a heart of gold. He helped so many kids behind the scenes that few people know about. He would always just operate with the idea that kids have to come first and whatever we can do to help them further the game of hockey.”

Foster lived most of his life in Glen Ridge, New Jersey, where he and his wife, Elaine, raised five sons, all who played hockey at an elite level, including Kevin, who was part of the 1982 U.S. team that skated at the World Junior Championship. The Fosters also helped raised a sixth “son,” Tom Preville. 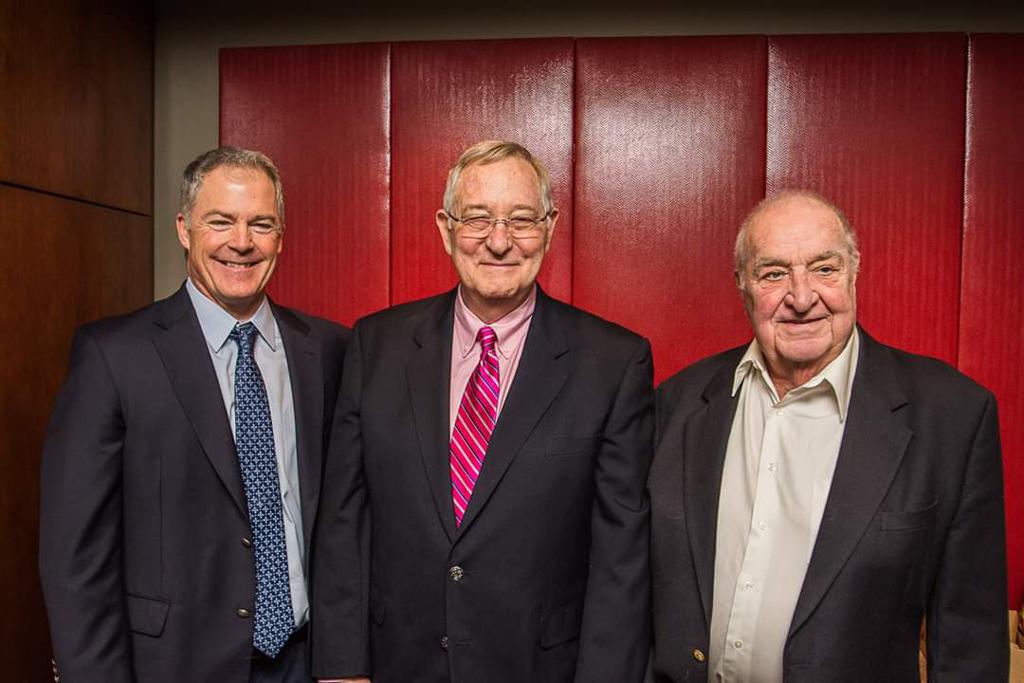 Dick Foster (shown on the right)

“When you’ve gone through all of that, you would think that by the time your youngest would be done, you’d be done,” Hefferan said. “Not for him. He wanted to be involved, he was always asked to stay and remain involved. Pretty remarkable that no one ever challenged him in any of his elections. Everyone respected his opinion. They didn’t always have to agree with him, but he was so well regarded and respected.”

By day, Foster was a business attorney. Taking part in all the hockey activities really shifted his focus to more fun activities. But his law background provided Foster with a solid knowledge base that helped tremendously in building a hockey league.

“He knew every trick in the book,” Hefferan said. “He had a great sense of humor, but he was very compassionate and had a lot of wisdom. He was very careful in measuring how he wanted to respond to things and how to address problems and how to problem solve. He had a great mind of those kinds of things that could come up in the world of hockey.”

Along with his wife, kids and friends, hockey was Foster’s life. He wouldn’t have wanted it any other way.

“The foundation that it gave his family is what drove the passion,” Palecco said. “All his kids played; his wife was involved in it. It was always some place he could go home and call family.”

Foster leaves quite a legacy on the hockey communities in the Atlantic District.

“I think there are going to be many times now that we will say, ‘Boy, I wish Dick Foster was here to ask his opinion,’” Hefferan said. “He was not a very verbose person, but when he spoke, he really spoke with authority and sensibility and logic. That’s kind of something we need more today than ever because the sport has become very passionate and emotional for some people where they lose a little objectivity. Dick was always that grounding force.”

There is a celebration of life planned for Foster on Dec. 21 at 3 p.m. at the Glen Ridge Country Club. Plunkett will be there to honor a close friend who helped fuel his own passion for hockey.

“I expect it to be a very large affair,” Plunkett said. “He was so well loved.”