Second Annual Special Hockey Classic a Hit for All Involved

WAYNE, N.J. — Alex DePalma was a veteran hockey coach at a handful of high schools and arenas in central New Jersey for almost 30 years when John Schwartz, a fellow coach at the Ocean Ice Palace, where DePalma spent most of his ice time, approached DePalma with an idea.

“He said that he had a program for kids with special needs,” DePalma said. “I was willing to help out.”

That was almost 10 years ago when DePalma, the founder and coach of the Brick Stars, started with eight kids.

It also led to the Brick Stars program being the host of the 2019 USA Hockey Special Hockey Classic Nov. 8-10 at the Ice Vault Arena in northern New Jersey, some 60 miles north of the Stars’ home base.

The Ice Vault staff graciously extended their facility to 12 different teams from all parts of the country and Canada to participate in the three-day event for special hockey players from ages of 4 through adulthood.

However, once every team and participant arrived Thursday and Friday, DePalma breathed a sigh of relief. Even if he had to be concerned about his own team, the Stars, he was ready to enjoy.

“Now, I can have a little fun,” DePalma laughed. “I’m starting to enjoy it now.”

He wasn’t the only one.

All anyone there had to do was look at the smiles of the coaches, the players — and yes, even the players’ parents.

There are no penalties and no hits — and no complaints echoing from the stands.

“You get to see the best of what hockey could be,” DePalma said.

Dina Crepaldi’s son Paulie was 9 years old when he started to have a liking for hockey, mainly because his brother Gio and sister Adriana both played.

“The kids loved Paulie and wanted him to play,” said Dina Crepaldi. “We’re a very family-oriented group and do everything together, a well-rounded hockey family. Paulie would always just pick up a stick, find a puck in the driveway and go shooting.”

Crepaldi said that her son was a natural on skates.

“We saw him walk on the skates right away and said, ‘This is amazing,’” Crepaldi said. “Let’s see what he could do skating. It took a little while for him to get used to it.”

Once Paulie got the knack of skating, his mom took him to the special needs skates organized by DePalma. And she became the Brick Stars’ team manager, a role she still embraces today.

“It’s giving these kids a chance to learn the game,” Crepaldi said of the Special Hockey program. “It’s making the world a better place.”

A lot of the others involved are college and high school players, lending a hand as volunteer referees and scorekeepers.

“We even have the younger kids, the youth hockey players, helping,” Crepaldi said. “To see where Alex is with the program, the growth of it all, is tremendous. It’s helping our players become active members of society. Events like this help our players become friends with players from Chicago, Boston, Canada. It’s tremendous.”

Dan Loader is the head coach for the Toronto Gladiators. Loader is a veteran youth hockey coach who once worked with former NHL star Pat Flatley.

Loader just started to work with the Gladiators program a few years ago. He never had one of his own children involved in special hockey.

“I just love it,” said Loader, who also coaches baseball, soccer and basketball with the Gladiators’ special program. “We have kids from eight to 52. We have great parents, who are just unbelievable. We’re more like a family.” 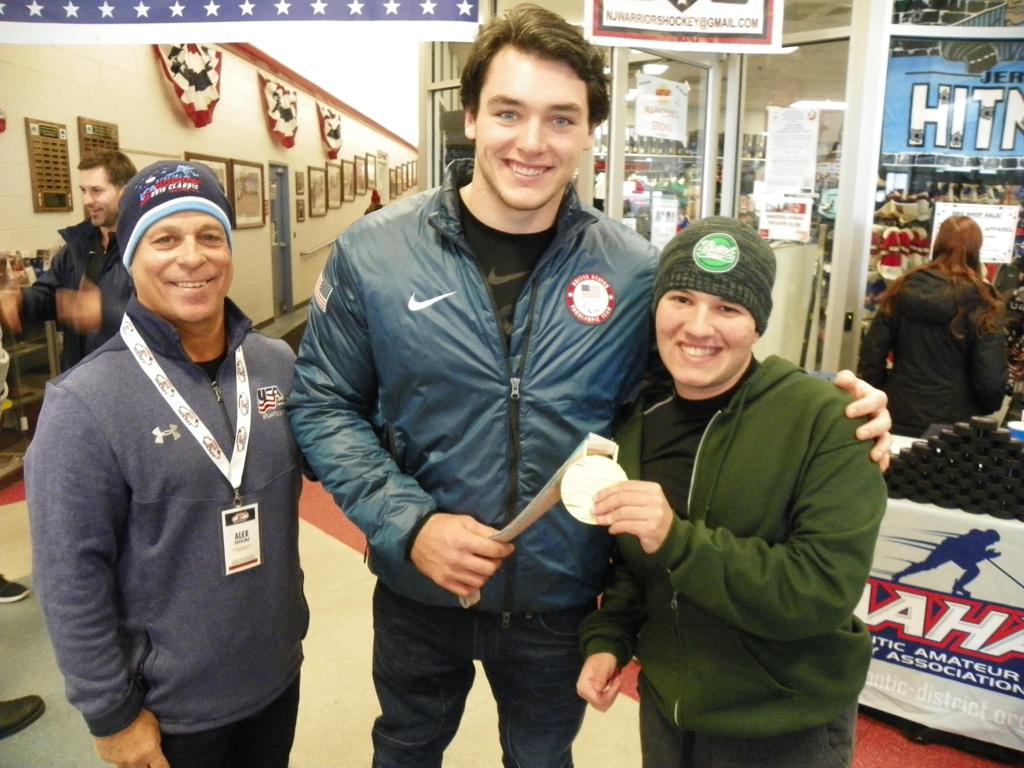 Jack Wallace of the U.S. National Sled Hockey team was in attendance.

The Gladiators are so much of a family that the Gladiators turned their trip to the tournament in New Jersey into a mini-vacation with a ton of touristy events in the New York area. Taking the nine-hour bus ride from Canada, the Gladiators were able to visit the Statue of Liberty and One World Trade Center in New York.

“It’s really just a big family event,” said Loader, whose team played four games over the weekend. “It’s just a lot of fun for the kids. This is just fantastic.”

“It means a lot to me,” said Jonathan Speranza, a 22-year-old who plays for the Gladiators. “I got to meet new people and that was awesome. We went to Manhattan and that was great. I like going on trips. This was my first time coming to Manhattan and I want to come here again. It’s been amazing playing here. I scored a lot of goals.”

Speranza was asked how many goals he scored over the weekend.

“I scored 12 goals,” he said, finding the net more than his favorite player, John Tavares. “I had a great time, meeting people from all over the world.”

“I have to admit that this is the biggest thing for the Brick Stars ever,” said Gargiulo, who has been playing for the Stars since 2015. “It means a lot to me to play here. I used to struggle a lot with my skating, but now I’m getting better at it.”

Gargiulo said that he was looking forward to the tournament for a long time.

“It’s a pretty big challenge,” Gargiulo said. “I got to meet all these other teams and they’re pretty good. We want to finish first, that’s the goal.”

But in this tournament, everyone is a winner.

The tourney had a special visitor. Jack Wallace, a member of the U.S. National Sled Hockey Team that won the gold medal at the Paralympic Winter Games last year, brought his gold medal to the tournament and showed it to many of the participants. Wallace, a native of Franklin Lakes, New Jersey, played a lot of hockey at the Ice Vault.

“It means the world for me to be here,” said the 21-year-old Wallace, currently studying biomedical engineering at The College of New Jersey. “Hockey can bring us all together. Sled hockey isn’t as well known, but I think everyone knows how much that medal means. Maybe I can help make their day special.”

Wallace said he plans on being on the national team for the 2022 Paralympics in Beijing and hopes to play sled hockey for as long as he can.

“I’m known for smiling when I play,” Wallace said. “My teammates make fun of me because I’m smiling on the ice, but playing hockey is my favorite thing on this planet to do.”

Wallace wasn’t alone with that special feeling in the Ice Vault. There were the players, but there were also the parents and organizers.

“I never expected anything to be this big,” Dina Crepaldi said. “It exceeded my expectations. I knew it was growing, but not to the national level. I’m very proud of where it’s gone.”

“I have parents come up to me and say, ‘Thank you,’” DePalma said. “I say, ‘For what?’ I tell them that the kids changed all of our lives. I think they gave us a better understanding about life. As long as they’re always happy, I’m always willing to help.”