If you build it, they will come.

The RoughRiders ranked first again with 158 kids in November of the following year, and 186 during its event last February. In order to keep up with the demand, they have expanded to two, one-hour sessions instead of one, and increased the number of volunteers to ensure every participant is paired with an experienced player or coach.

The goal for this weekend’s event is 200 players, according to hockey director Dustin Timm. So what made the organization in the middle of Iowa so successful?

Timm attributes much of the club’s success to dedicated staff members and a positive shift in its culture.

“The coolest thing is seeing everyone buying in,” said Timm, also an assistant coach for the RoughRiders United States Hockey League team. “It’s a community thing, not just an event. Everyone understands how important it is.”

The program, which began in 2002, went through several name changes before becoming the RoughRiders about 10 years ago. It wasn’t until 2016 that the club began to experience success with its youth program and Try Hockey events. With the help of Cedar Rapids Ice Arena marketing and events coordinator Tonya Frost and former youth hockey director Heather Adams, the club has become consistent in solidifying its process and retaining players. Each child who signs up following Try Hockey for Free, presented by SportsEngine is enrolled in the Learn To Skate and Learn To Play programs.

“We have a pretty dialed in progression now, which is important,” Timm explained. “We don’t want to put players in the wrong position.”

Timm and his staff rely heavily on Facebook and Twitter ads, email marketing, and local television news coverage to promote Try Hockey Days and the club in general. During the city’s annual Halloween parade last weekend, the RoughRiders entered a float and handed out Halloween goalie masks, jerseys and candy to spread the word about this weekend’s activities.

“We reached almost 9,000 families in that single event,” Timm said. 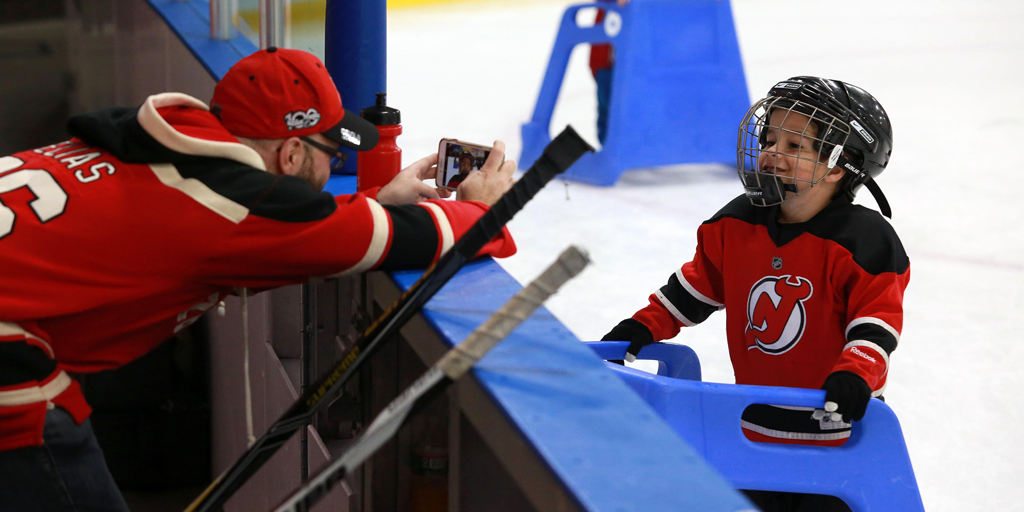 Find a Rink Near You!

Besides the typical introductory one-hour sessions this weekend, Timm and other directors will make themselves available to parents, answering questions and providing information on how to sign up for Learn To Skate and Learn To Play. Beginners will be divided into three different groups according to their skill level. Members of the RoughRiders USHL team will be available for pictures and autographs following the sessions. Players from the 10U and 12U travel program will be paired with beginners to assist in putting on hockey gear, skating and shooting. Timm says this is one of the most crucial aspects of the event.

“It might be a little intimidating for a kid trying hockey for the first time to be out there with an adult,” he explained. “For me, to see our own players helping these new kids who don’t know how to skate … it’s absolutely unbelievable to see 10, 11, 12-year-olds helping the next generation of hockey players get on their feet and love the game.”

In keeping with the standard of other Try Hockey events around the country, Cedar Rapids uses USA Hockey’s American Development Model during sessions. Timm believes it plays a vital role in player retention and development.

“It groups players with similar abilities,” he said. “You’re not going to have a 4-year-old skating next to a 10-year-old. Younger players aren’t feeling as intimidated. It makes the process easier to understand.”

The RoughRiders have had the same success in all levels of their youth program as in the Try Hockey events. Over 215 kids are currently enrolled, including travel select, high school, and a house league. Team tryouts are generally held each August, but players are welcome any time after the season starts. All levels participate in weekly one-hour individual skill sessions, with one-hour practices twice a week for 10U, 12U and 14U. The club is also working with the Maidens of Mayhem, a local program for girls ages 4-14.

“We have a lot of resources with the USHL team, coaching and financial resources,” Timm said. “We’re hoping to bring in the Maidens of Mayhem officially as a RoughRiders girl’s program down the road.”

The greatest benefit of initiatives like Try Hockey events, Timm says, is the ability to offer a model for beginners who might not otherwise come in contact with the sport.

“It provides opportunity for participants to meet our current players, for them to share stories, to create those bonds,” Timm said.