Taylor Lipsett May Have Hung Up His Sled, But He’s Nowhere Near Done Working with USA Hockey

He may have retired as an active player five years ago, but the impact that Taylor Lipsett continues to have on sled hockey in the United States cannot be understated.

As one of the most decorated Team USA members over the course of a highly successful career, Lipsett was instrumental in two Paralympic gold medals and two world championships in addition to a USA Hockey Sled Classic, presented by the NHL, Division A title for his hometown Dallas Stars squad in 2012.

Despite retiring from playing, working a full-time job as an investment manager at Bank of America in the Dallas area, as well as raising a family, Lipsett is still heavily involved with USA Hockey as a volunteer, serving as an Athlete Representative on the Board of Directors.

“Most recently, I was elected to the Executive Committee on the Board of Directors as an athlete rep,” said Lipsett, 32.

“I was also appointed the sled hockey representative for USA Hockey this past summer. In that role, I serve as a main point of contact for all things sled hockey for the entire country, as far as people looking for information about programs in their area or information on starting a new program, or a question about where to buy equipment and that sort of thing. It’s been a lot of fun.”

There are few people better qualified to represent the sled hockey community at USA Hockey’s highest administrative levels. During his time on the national sled hockey stage, Lipsett, who has a condition called osteogenesis imperfecta, also known as “brittle bone disease,” has witnessed the sport’s incredible growth and been instrumental in many key moments of its history.

He joined USA Hockey in 2003 when he was just 16 and became a fixture on the national team over the next decade-plus, developing into one of the world’s top sled hockey players. He participated in three Paralympic Winter Games, helping Team USA win bronze in Torino in 2006 and then take gold in 2010 in Vancouver and again in 2014 in Sochi. He also helped the U.S. bring home medals in each of the six World Championship tournaments held during his tenure — bronze in 2008, silver in 2004 and 2013, and gold in 2009 and 2012.

In the 2010 Paralympics, he led Team USA with five goals in five games and scored the key insurance goal in the third period of the 2-0 gold medal victory over Japan. His performance in the 2012 World Championships was also impressive — six goals and two assists in the tournament, including three goals and an assist in the 5-1 gold medal clincher over South Korea.

When pressed to name his favorite moment as a player, he chose the 2010 Paralympic gold medal performance. 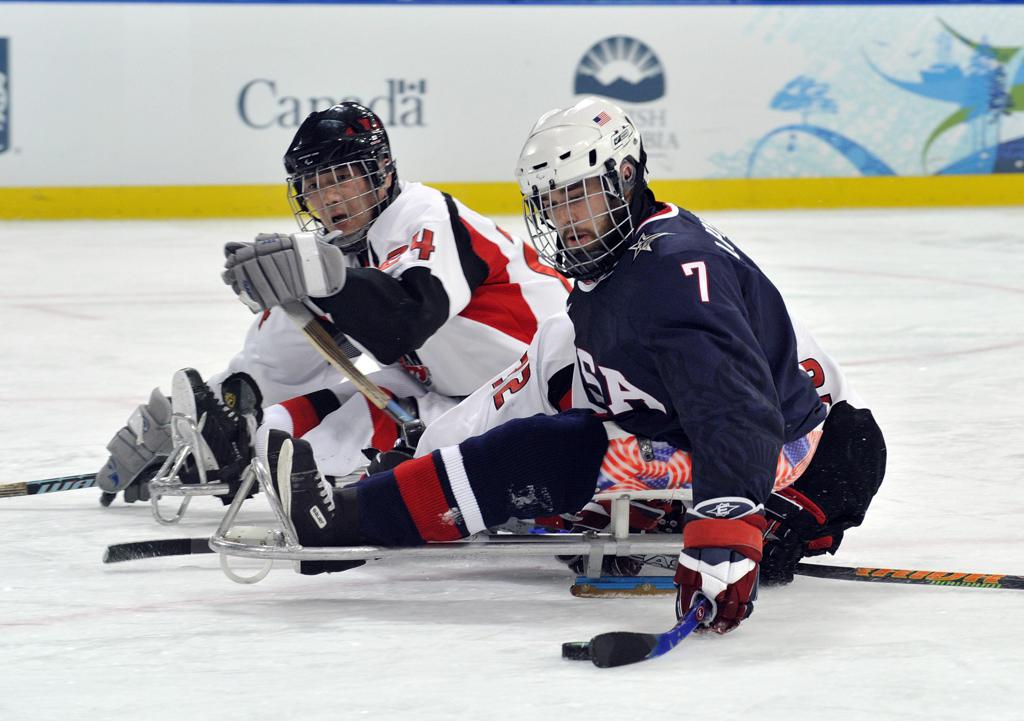 “The first gold medal in Vancouver was definitely the highlight of my career,” Lipsett said. “It was not only the first [Paralympic] gold medal for myself and the group of guys that we kind of all progressed up through the sport together, but it was in Vancouver, so it was relatively close to home, so I had a ton of family there. My wife was there, my parents were there, both sets of grandparents, I had multiple aunts and uncles that were there. So just having that many people there in person supporting me was an amazing experience, for them to get to see that live, and to meet up with them after the game, was really special.

“And as an individual, my performance in Vancouver was really strong. As a player, being able to contribute to the team’s success and knowing that you did your job on an individual level was really special to me. And to score that second goal in the gold medal game, to kind of seal the deal, was something that I’ll never forget.”

Lipsett also reflected on the growth of the sport, as it progressed from pretty humble beginnings when he first joined USA Hockey as a teenager.

“When I was first named to the team, USA Hockey wasn’t managing the program yet,” Lipsett said. “And then USA Hockey kind of took over the reins and the amount of support and resources that USA Hockey has not just poured into the national team program, the Paralympic team, but has also continued to pour into the grassroots level, has been astounding. The proof is kind of in the pudding — they might say you can see the result of that investment of resources from USA Hockey, not only with the Paralympic team winning three gold medals in a row now, but also just in the growth of the sport — the number of teams around the country has literally exploded over the last decade. It’s not just financial commitments, but also commitments of volunteers and people around the country that really put in the work, day-in and day-out.”

It seemed like Lipsett was still in the prime of his playing career, but he hung up the sled at the young age of 27 in 2014, explaining that it was just time to move on to the next phase of his life. While it has allowed him the chance to get more involved in the management side of sled hockey with USA Hockey, as well as dabbling in broadcasting with NBC during the 2018 Paralympic hockey tournament, it really means spending more time with his wife Kathleen, and their two daughters — Mila, 4, and Alina, who just turned 1.

“The driving force [behind retiring as a player] was really just starting a family and kind of focusing on my career,” Lipsett said. “I was on the team for 10 years and during that time, I got my college degree, got married, and started my career in the investments world. After 2014, I went back to school and got my MBA and we started a family. So the driving force was just focusing on starting a family and being at home more and dealing with all the responsibilities and commitments that goes along with that, focusing on my career and just kind of putting my education to use and starting to move up the ladder in corporate America.”

Still, despite a very busy schedule, Lipsett welcomes the opportunity to stay involved and continue influencing the future direction of sled hockey specifically, and Paralympic sports in general.

“The purpose behind it isn’t complicated, it’s just the fact that I want to give back to the Paralympic movement within the United States and help continue pushing that movement forward,” he said, “and making sure that Paralympians today have more opportunities than I had, and that the next generation of Paralympic athletes have it even better than the athletes have it today. During my career, there was substantial growth in the Paralympic movement and huge strides were made for both Paralympic teams and Paralympic athletes individually as far as sponsorships and things like that. Just to see where it was when I first started and then where it was when I retired and just thinking about where we can still go is what motivates me to stay involved as much as I can and keep pushing things forward.

“I am just trying to make sure that not just our national sled hockey team members have a voice on the Board of Directors and Executive Committee, and also just in general that disabled hockey is represented at the highest level within USA Hockey. I continue to give those players a voice.”