University of Cincinnati offensive lineman Morgan James hasn’t always been a football player. In fact, he’s only been one for a few years now, as the 6-foot-5 native of Highland, Michigan, actually grew up as a hockey player. Born across the Atlantic Ocean in Wales, he emigrated to the Midwest when his family moved there for his father’s job, and he went on to play hockey professionally before switching gears and deciding to try his hand at college football.

Now in his graduate season at Cincinnati, James is entrenched as the starter at right guard and had helped the Bearcats to a 4-1 overall record and a second-place standing in the American Athletic Conference's East Division through the first weekend of October, with the only setback coming to perennial top-five powerhouse Ohio State. He was also part of an offensive line that had paved the way for the Bearcats to roll up over 1,000 yards on the ground while allowing just 13 quarterback sacks in 136 pass attempts in that span, as Cincinnati sought to earn both a second straight final Top 25 national ranking plus a second consecutive bowl game appearance.

We spoke with James about his hockey career and how that helped develop him as an athlete and ultimately a football player.

Q: How did you get your start playing hockey?

A: I played for the Lakeland Hawks [youth hockey association] in Waterford, Michigan. I played in a couple of different places for 14U, 16U and 18U, but started skating when I was 7 years old.

Q: Why did you keep playing, and when did you move on up to the junior hockey ranks?

A: I loved skating and being physical. The Metro Jets [of the NA3HL] are my best memories of hockey. I got a lot of ice time and was a leader for the guys.

Q: You also played with the Tri-City IceHawks. How and when did you decide to turn professional?

A: I got a tryout with the Columbus Cottonmouths [in 2011]. I started the season there and bounced around a bit [Vermont Wild, 1000 Islands Privateers, Louisiana IceGators]. It was a cool first season.

Q: After retiring from hockey, did you go right to college and into playing NCAA football?

A: There was a process, and a chain of events. I worked 9 to 5 and hated it, and I thought I should go to college and get a better job with a degree.

Q: How did you wind up getting involved in football, and getting colleges to notice you?

A: A close friend of mine was working with a guy, Jim Browne, who was training football players at Athletes Edge USA. He saw me and how big I was, and that I was in good shape. He said that I was a beast, and that I should try playing football. 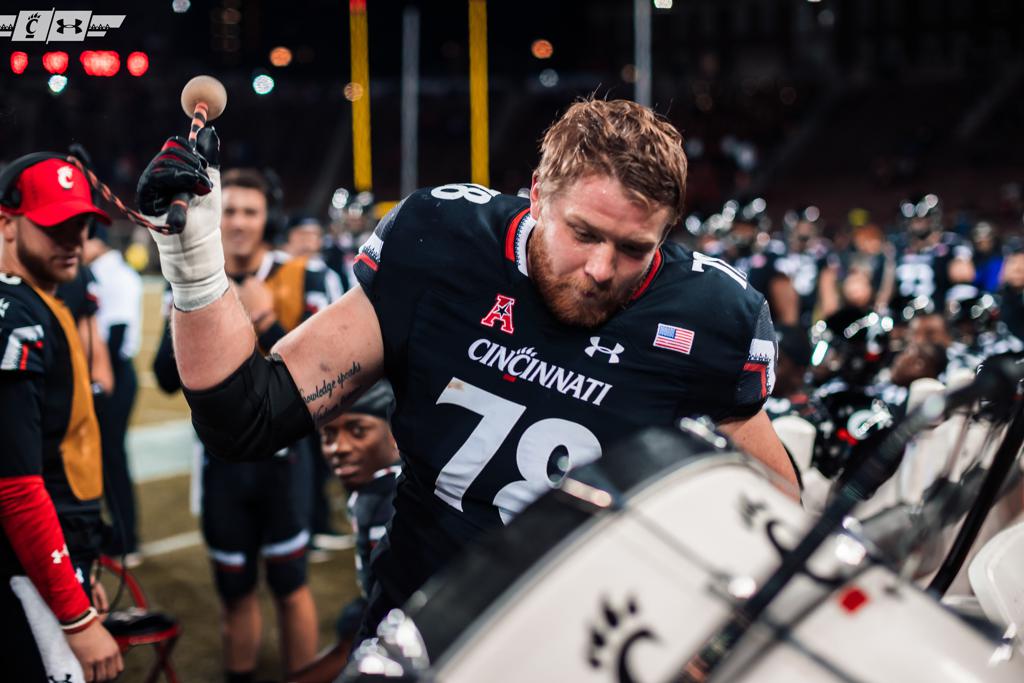 Q: You got to walk on to the football program at Cincinnati. How did you become an offensive lineman?

A: Initially, I thought I’d be a defensive lineman, with my hockey background and being a good athlete, they put me on the O-line instead, and that was it for me.

Q: How did hockey help you with football, particularly in terms of leverage and positioning?

A: It created a good base for my legs, and balance is important for an offensive lineman, playing low and such. Hockey definitely helped prepare me.

Q: You bulked up 75 pounds (to 325 pounds) to play NCAA Division I football. Besides lifting weights, how did that happen?

Q: You redshirted with the Bearcats in 2015, got into 10 games as a backup in 2016, and played as a backup and on special teams in 2017. Last season you started all 13 games at right guard, as the Bearcats finished 11-2 overall and won the Military Bowl over Virginia Tech. How was that experience?

A: Last year was huge. I didn’t get to start the year before, when we only won four games. This past year was a big year to start, and to come out and have the year we did, with the team being so successful, was awesome.

Q: Now you’re playing your final collegiate football season while finishing up your MBA, having already earned a bachelor’s degree in communications with a minor in business from UC. What’s your primary goal going forward?

A: My goal is to come out and have a good year and play in the NFL. If you had asked me six years ago if I might play in the NFL, I would have said no way — and now it’s gone from a dream to a reality. I plan on exhausting everything in football, to my full potential.

Q: Football is obviously your focus right now, but after your career is done, would you ever return to playing hockey, even if just for fun?

A: I can still skate — and I have some tricks up my sleeves.