LAS VEGAS — It was a night of laughs, hugs, standing ovations and even some tears as USA Hockey kicked off the fourth annual Warrior Classic presented by Terry Fator at City National Arena in Las Vegas on Friday.

Fator — the comedian, singer and celebrity impressionist who won Season 2 of “America’s Got Talent” — joined USA Hockey President Jim Smith, special VIPs and a group of roughly 80 disabled Warriors at the meet-and-greet social to celebrate the start of the three-day tournament, which runs through Sunday. This marks the second year of Fator’s involvement with the tournament, which doubled in size to 16 teams from 12 states in 2019. 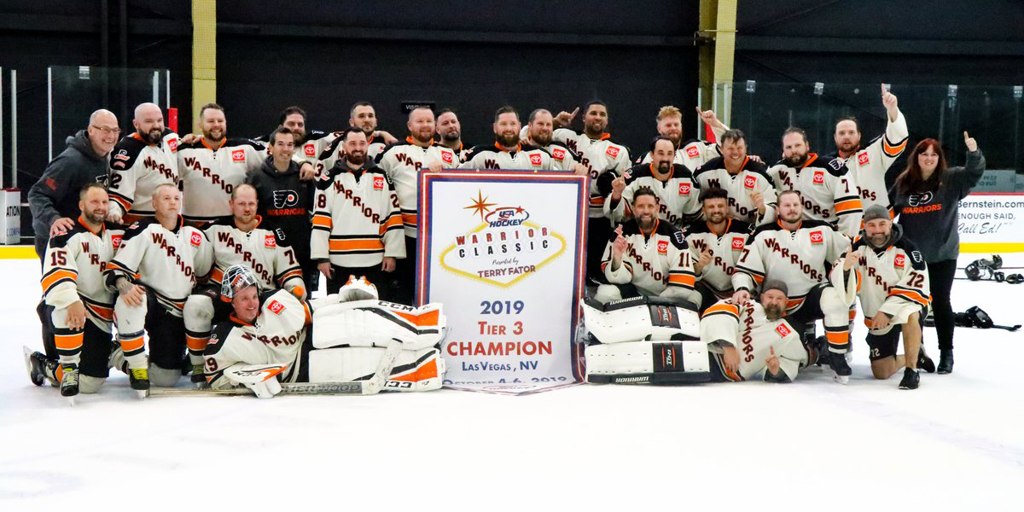 Fator — who was joined by Winston the Impersonating Turtle from his stage show — has long been a supporter of the military, and his passion for giving back to men and women of the U.S. Armed Forces dates back to his childhood.

“When I was 8 years old, a very good friend of mine at church, his father had spent seven years as a POW at the Hanoi Hilton during the Vietnam War,” said Fator, who recently celebrated 10 years as the headlining act at The Mirage hotel and casino. “When he came home, I heard him tell stories of being spat upon and cursed at, and I saw this man who had been tortured for seven years weep because of the way he was treated. At 8 years old, I made the decision that I would never, ever allow that to happen in my lifetime again, and if I had a voice, I was going to dedicate myself to making sure people knew about what each and every one of you do for our country.

“It’s just become a mission of mine to make sure you know you are appreciated, and don’t ever let anyone tell you that you’re not. I just want you to know what an honor it is to be a part of something like this.”

The Warrior Classic was formed to give a competitive outlet to U.S. military veterans with disabilities who play ice hockey. All 36 games from this year’s event will be streamed live on HockeyTV from City National Arena — the practice facility for the NHL’s Vegas Golden Knights — and the Las Vegas Ice Center.

Nick Pidge, a veteran of the U.S. Navy and U.S. Army Reserve who suffered hearing loss while serving on the Dwight D. Eisenhower aircraft carrier in the Persian Gulf, was all smiles after his Philly Flyers Warriors went 2-0 on the opening day of the tournament. The 27-year-old defenseman jumped at the chance to be part of the team when it formed in February in Philadelphia and was excited his squad could make the trip to Las Vegas.

“Oh, it’s been amazing,” said Pidge, who began playing hockey at age 8. “Just meeting all these guys and practicing, let alone playing a tournament, has been great and I’ve made a lot of friends. I can’t believe this type of thing exists, and it’s amazing these guys put this together for us.”

For J.J. O’Connor, who serves as chairperson for USA Hockey’s Disabled Section, the tournament is a chance to give back to those who have sacrificed for the country.

“It’s amazing to me to see the growth of the Warrior discipline over the last few years,” said O’Connor, who became paralyzed at age 16 after breaking his neck while playing hockey. “I’ve seen a lot of great things at USA Hockey through the years, but none of them make me more proud as an American and as a patriot than this Warrior discipline. Seeing veterans with a disability getting out there playing the game, enjoying themselves and bringing themselves together just like they did when they were serving the country really makes it feel as though I’ve done a good job.”

O’Connor put things in perspective and praised the players for their participation.

“We all have a disability, and we all love the game of hockey,” he said. “But it’s not your disability, it’s your ability who makes you who you are. I’m proud of everybody in this room, because you’re here still doing it and enjoying the game. Thank you for serving our country and for representing what it truly means to be an American.”

“Last year, when I heard Terry Fator was going to sponsor this event, I thought it was great,” said Vaccaro, a veteran of the U.S. Army and U.S. Marine Corps. “We came [to Las Vegas] with eight teams, and it was just an amazing event. All you guys went back home and told stories about what happened in Vegas, even though you’re not supposed to, and then this year we doubled in size. I appreciate everybody being here.”

Marcy Cote was on hand at the welcome reception as its Gold Star Mom — a mother who lost a child in service to the country. Her son, Budd, was a Marine killed in the line of duty in Iraq on Dec. 11, 2006, and she was emotional after receiving a standing ovation and multiple hugs from the veterans in the room.

“I think it’s so wonderful,” Cote said of the tournament. “They’re all heroes.”

Smith is highly optimistic about the tournament’s growth expects the impactful event to continue to expand in the coming years.

“I think we’re only at the beginning footprint of where this could go,” he said. “There are so many veterans who have served us so well that it’s just going to be a great opportunity to give back, and it gives them a chance to have that camaraderie and be part of a team. I’m proud too that our country looks at veterans differently than they did during the Vietnam era, and people really appreciate what they’ve done.

“We’re proud to have this relationship and partnership with Terry Fator, so we’re excited. It can only grow from here, and who knows where this may go in the future? It’s really something special.”