Deming was inducted along with Olympian Brianna Decker, Bob Normand and Terry Klay

Growing up in New York, baseball was Al Deming’s passion.

However, when he moved to Wisconsin and a couple of his boys picked up sticks, Deming was quick to make hockey a priority in his life.

Deming latched onto the hockey board as a volunteer in Waupun, Wisconsin, and moved up the ranks to president. Same thing with the Wisconsin Amateur Hockey Association (WAHA). While still having an integral role at the local and state levels, Deming moved up onto USA Hockey’s Youth Council and was also named a USA Hockey director.

“When he gets hooked on something, he goes all out,” said Don Mulder, vice president of USA Hockey and a WAHA director emeritus. “He just continues to work on it until the situation is taken care of. He’s just a great promoter of the sport. He does a great job in what he does.”

For all that Deming has done in hockey, he was inducted into the Wisconsin Hockey Hall of Fame during a ceremony in Eagle River, Wisconsin, on Sept. 7.

“That is a tremendous honor to join a lot of people that I’ve looked up to for years and people that have been mentors of mine like Don Kohlman and ‘Bud’ Sheldon and Don Mulder that helped me as I got involved in hockey,” Deming said. “To be in the Hall of Fame with them is a great honor and a bit of a humbling experience as well.”

Deming has always been big into grassroots hockey and starting from the ground up. He first got on the Waupun Youth Hockey Board in 1982 before becoming vice president and then president from 1988-98.

Deming took over as a WAHA regional director in 2001 and WAHA president in ’16. Both are positions he still holds today. 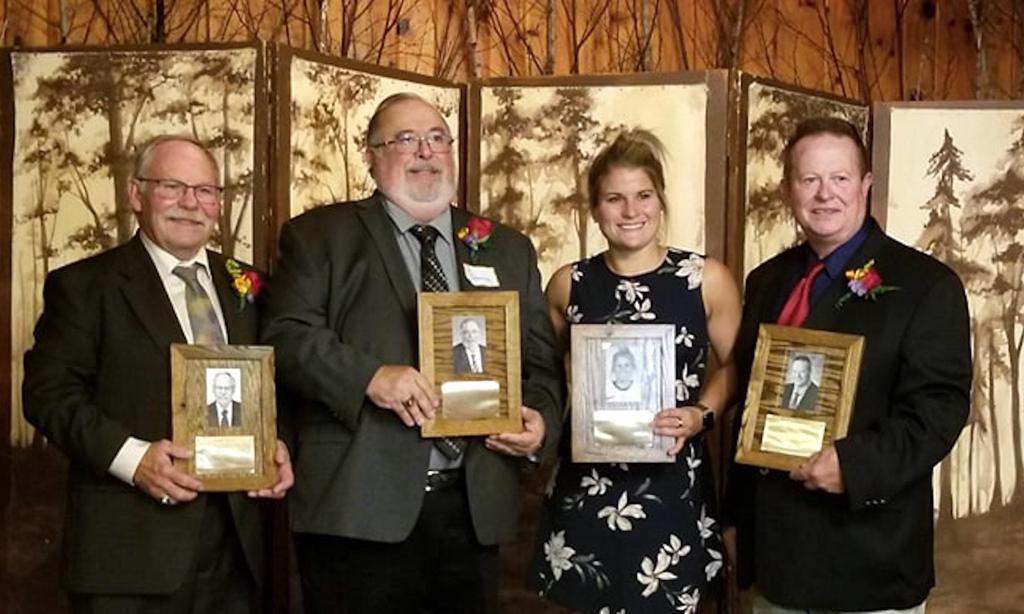 At the national level, Deming joined the USA Hockey Youth Council in 2016 and was elected a USA Hockey director two years later.

Deming, who recently turned 69, said a big reason he’s always continued with hockey is because he has so much fun. He stressed how important that is, especially while volunteering.

“Fun is a very small three-letter word, but it means an awful lot to the continuation of players, coaches, officials and everybody,” said Deming, who retired two years ago from his day job as the general manager at East Central Select Sires, an agricultural co-operative. “That’s a big part of what I’ve enjoyed about hockey is that throughout my entire tenure with hockey programs, it’s always been an enjoyable time.”

Playing a role in so many capacities locally and nationally has been key for Deming. He wants to make an impact in as many areas as possible. Deming feels one of the biggest roles he’s played over the years is helping shape USA Hockey’s American Development Model (ADM).

“Guy Gosselin and I put on the first ADM clinics and stuff here in the state of Wisconsin, and just to see where that has continued to develop and continued to grow is obviously a very big part of the past that I have and one of things that I really treasure,” Deming said.

Deming feels like he’s made a difference during his hockey tenure. He’s accomplished what he set out to nearly four decades ago.

“I’m typically a very grassroots kind of guy, but the biggest thing I wanted to accomplish is to have a safe environment for skaters of all ages, of all skating ability, whether male, female, disabled,” Deming said. “I want everybody to have an opportunity to skate against equal competition with themselves and give them the opportunity to learn the game and develop the love for the game that I have.”

Decker, a Dousman, Wisconsin, native, is just the second female elected to the Wisconsin Hockey Hall of Fame. She went on to win three national championships at Shattuck-St. Mary’s School in Minnesota and a national title at the University of Wisconsin. A two-time Olympian, Decker was instrumental in Team USA capturing the gold medal in 2018 and silver four years earlier. She has also won six golds in the IIHF Women’s World Championships.

Normand has been a big hockey figure in Chippewa Falls, Wisconsin. He’s been the president of the city’s hockey association since 2003, coached at every level for boys and girls and is in his 27th year on the WAHA Board of Directors.

After moving to Wausau, Wisconsin, in 1976, Klay latched onto hockey in many capacities. He coached the 14U and 10U team in the Wausau Area Youth Hockey Association and then was an assistant coach for 21 years at Wausau East. After his high school coaching gig ended, he went back to coach 12U and 10U teams and took over a learn-to-skate program.

“Not only are they great people, but each and every one of them have given back to the youth grassroots hockey players of the state of Wisconsin,” Deming said. “I’m very proud to be inducted with the other three inductees.”