His father, Garry, was a Badgers defenseman for three seasons in the 1980s and often took Jake to the Kohl Center to watch UW in action.

Bunz was hooked as he saw the likes of Ryan Suter and Ryan McDonagh star for his favorite team. He wanted nothing more than to attend his father’s alma mater and be a Badger.

Wide-eyed youths attending Wisconsin hockey games the past few seasons would have done themselves well by looking to No. 7 in cardinal and white as somebody they could idolize and emulate.

That’s not because Bunz, who provided responsible blue line depth during his 31-game career, was a puck-rushing defenseman piling up the points. It’s because he succeeded as a student athlete in every sense.

Bunz’s diligence and dedication to academic pursuits and responsibility toward others underscore why he was named the 2019 Hockey Humanitarian Award winner.

The award, introduced in 1996, recognizes college hockey’s most outstanding student athlete who has demonstrated exemplary character and leadership within the community and points beyond.

“It’s a fantastic honor,” said Bunz, who graduates in May. “I just wanted to play for the Badgers and go to Wisconsin. I was blessed to get that opportunity to play here.”

Many have been blessed to be in the presence of Bunz. The 24-year-old native of Middleton, which is a few miles outside UW’s Madison campus, has given much of his time to helping others. That has included engaging in various community-related initiatives through the athletic department’s Badgers Give Back platform.

“The importance of education, getting good grades and serving others were instilled in me by my parents,” said Bunz, a real estate major and three-time All-Big Ten academic selection, in a nod toward Garry and his mother, Tia.

The largest and certainly most time-consuming endeavor Bunz has undertaken when it comes to commitment to others is the dozen mission trips he has taken to Haiti. 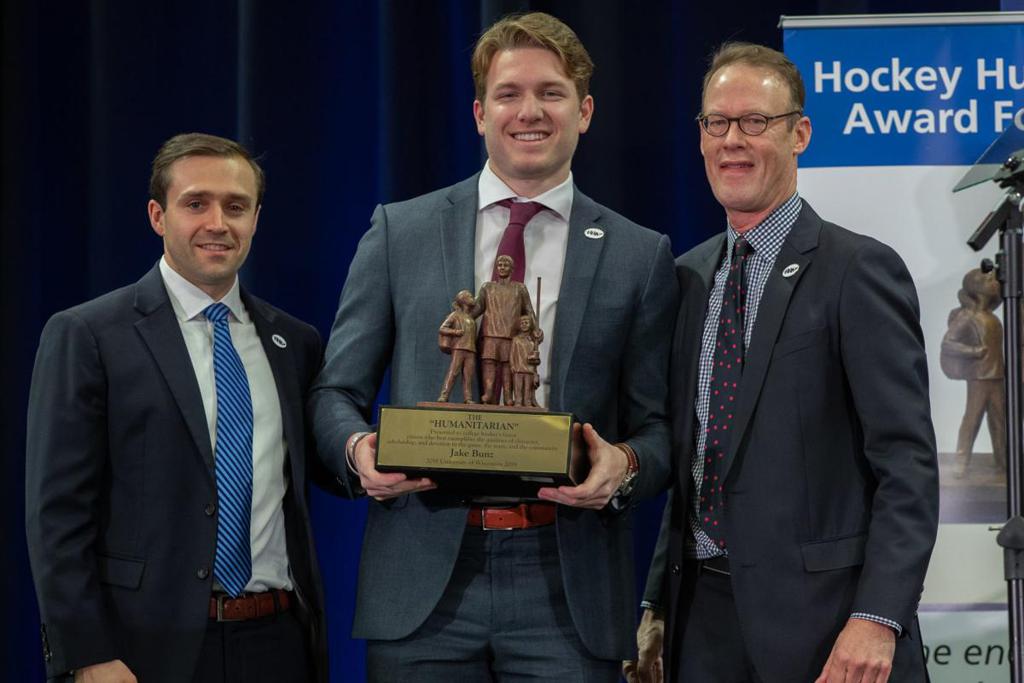 Bunz was a junior in high school in 2012 when Tia, a teacher and youth minister, wanted to go on a class trip. The destination was an orphanage in Fond Blanc, about a two-hour drive outside the Haitian capital of Port-au-Prince.

Through the Fond Blanc Foundation founded by Jake and Tia, close to $400,000 has been raised. What has also been raised through the mother/son effort, and certainly with the help of others, is awareness of a cause that has led to many return trips in providing priceless hands-on assistance.

“It’s hard work, but super fulfilling,” said Bunz. “Not only does it help the people you are serving, but it helps the people who are serving because you realize the struggles that other people are going through. It is rewarding to be able to do something about it. I really enjoy it.”

While the children have so little, if anything, in the material sense, it quickly became evident to Bunz that they have so much to offer. To that degree he likes telling a story of one of the children from the orphanage who, when given a gummy worm by a member of Bunz’s team, immediately provided a heart-warming lesson in humanity.

“You’d think that kid would run off and enjoy it because the kids don’t often have treats like that,” he said. “Instead, he broke the gummy worm into about 12 pieces and shared it with the rest of the kids. I think that’s a testament to how the kids are and how they live their lives. It was really amazing to see how they enjoyed their lives especially since, back in the States, we have everything at the tip of our fingers and we sometimes still struggle.”

The bottom line is that there is so much more than what meets the eye.

“Even though their situation, which to us was so poor, they loved life and enjoyed everything they had,” he said. “They lived life to the fullest.”

That’s exactly what Bunz has done at Wisconsin. As the sands that are the days remaining until he graduates continue to slip through the hour glass, he looks forward to making the most of his post-college life, including pursuing a career in real estate.

His father and grandfather have enjoyed such careers, specifically in real estate development where they have overseen projects such as senior residences and multi-family housing go from the blueprint to finished product.

“The coolest part about real estate development is taking a piece of land and building it up into a multi-family building,” said Bunz. “I think it is really cool to see a blank piece of land and having it turn into a beautiful building.”

Really cool also describes what Jake Bunz has done, and will continue to do, when it comes to making the world a better place.